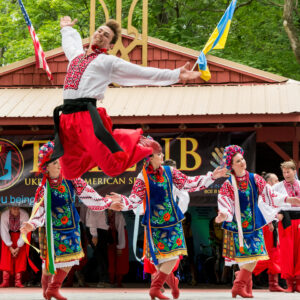 While the war in their homeland rages on, Ukrainian Americans are celebrating their culture and heritage while raising money to help.

The Ukrainian Folk Festival 2022, celebrating the 31st anniversary of Ukraine’s independence, will be held on Aug. 28 from noon to 8 p.m. at the Ukrainian American Sports Center, Lower State and County Line Roads in Horsham.

Billed as “A Celebration of Liberty, Bravery, and Unity” the event will raise money for humanitarian aid in Ukraine and refugees with $5 of each $15 ticket going to Ukraine relief.

“We’re still seeing fighting…Russia continues to attack in the east,” said Eugene Luciw, president of the Ukrainian Congress Committee of America’s Philadelphia branch. Russia is using “old school, World War II” tactics, he said. It shells and destroys an area and then moves in. The Russians are “killing a lot of civilians, a lot of our soldiers.” 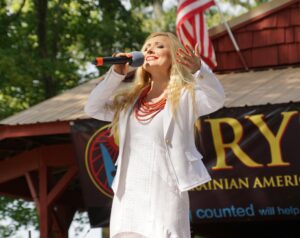 In areas taken by Putin’s forces, Ukrainians are being sent to Russia where they are placed in “filtration camps,” said Luciw. It is uncertain what is happening to them there.

“Reports also indicate Russian authorities are deliberately separating Ukrainian children from their parents and abducting others from orphanages before putting them up for adoption inside Russia,” Blinken wrote. Civilians are also coerced into signing agreements to stay in Russia. Meanwhile, thousands of Ukrainians who do not pass “filtration” criteria are “disappearing,” Blinken said.

That is why Ukraine must take back its territory, Luciw said, and not leave its citizens behind to fall into the hands of the Russians.

“Putin’s Russia is trying to occupy and destroy our people to expand Russia as it was in the Soviet Union,” he said. “We are a separate and distinct people, our culture, our people, our language.”

Another area of concern is fighting around the Zaporizhzhia nuclear plant. The European Union released a statement Sunday signed by 42 nations, including the U.S., calling on Russia to withdraw troops from the area. The statement says Russia’s military actions around the facility pose a threat to nuclear safety.

Some 14 million Ukrainian refugees have been displaced internally or fled the country.

“This is why our humanitarian efforts have to continue,” Luciw said.

As for the war ending soon, Luciw is pessimistic.

“No. It will be a long, drawn-out struggle,” he said. “There is no evidence the Russians are going to relent. And we cannot surrender our territory, putting those people at risk.” Once Ukrainians are taken to Russia they “don’t have freedom. We cannot leave anybody in the hands of the genocidal Russians.”

The Ukrainian Folk Festival will include art, music, dancing, and Ukrainian food, such as pierogis, kielbasa, rolled cabbage, picnic foods, and desserts.

There will also be crafts including the delicate “pysanka” (Ukrainian Easter Egg). Dancing will feature “the thunderous rhythm and power of ‘HOPAK’ – the world’s most exciting ethnic dance – and every brilliant ‘Kolomiyka’ (polka) and soulful folk song in between, experience Ukrainian Folk Festival 2022.

Children 14 and under are free and there is free parking.