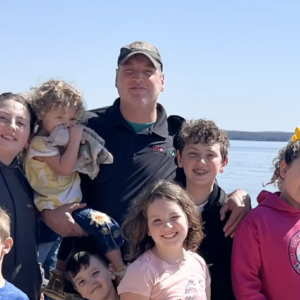 The trial for Mark Houck, the Bucks County pro-life advocate charged with violating the FACE Act for an altercation with an abortion clinic escort, is set to begin at the federal courthouse in Philadelphia on Jan. 24.

The case has national implications as to whether an escort can be considered an abortion provider under the law. Houck, who was arrested by a small army of FBI agents and other law enforcement as his wife and frightened children watched, has become a cause celeb for the pro-life movement.

One of Houck’s lawyers, Peter Breen of the Thomas More Society, said the government is pressing the wrong charges. And although Judge Gerard Pappert, a Republican who had formerly served as the state attorney general, denied a motion to dismiss, Breen was heartened by the judge’s remarks in that decision. Mark and Ryan-Marie Houck and their children

“The judge recognized in his order that the altercation was about literature and that’s not a FACE violation,” said Breen.  (FACE is the “Freedom of Access to Clinic Entrances” Act.) Houck, who leads a Catholic men’s ministry, had gone back toward the clinic to retrieve some of the brochures he had been handing out that were in a trash can when he was confronted by the escort.

“If two people have an argument over harassment of (one’s) son or positioning on the sidewalk, that sort of thing is clearly not a violation of the FACE Act,” said Breen.

The FACE Act or Freedom of Access to Clinic Entrances Act does not include volunteer escorts, Breen said.

“We vigorously dispute the allegations,” said Breen. “It’s not a violation unless the person is somehow impacting the abortion process. And that’s not the case here, very clearly.”

During pretrial litigation, Houck’s team showed evidence that Congress did not intend to include volunteer escorts when the FACE Act was written. They quoted the late Sen. Ted Kennedy (D-Mass.) who said, “Demonstrators, clinic defenders, escorts, and other persons not involved in obtaining or providing services in the facility may not bring such a cause of action (under FACE).”

City police and the district attorney previously declined to file charges against Houck. A private legal action filed by the pro-abortion activist was dismissed.

“What we’ve contended is the description in the indictment is 180 degrees from the real facts of the case,” said Breen. Houck did not approach the escort. Rather, “Love made a beeline to intercept and interfere with Mark,” said Breen.

The indictment states that on Oct. 31, 2021, at the Planned Parenthood Elizabeth Blackwell Health Center on Locust Street in Philadelphia, Houck “by force, intentionally injured, intimidated and interfered” with Bruce Love. And also, Houck “verbally confronted B.L. and forcefully shoved B.L. to the ground.”

“The government has no video, no pictures, no audio of (the incident),” Breen said.

Although the indictment claims there were two witnesses, the government has not told the defense who those people were.

Asked whether the Houck case is part of the Biden administration’s desire to promote abortion and clamp down on pro-life activity, Breen said, “Well, we are now up to almost 200 pro-life centers or churches vandalized or otherwise damaged. Instead of charging the people that did those things, you had over 20 pro-life activists charged under FACE. Our question to the administration is, when are you going to protect pro-life citizens because the charges under FACE so far have been against peaceful individuals?”

And, “the allegation against Mark is the first, as far as we know, the first and only prosecution of a pro-life sidewalk counselor for what he is alleged to do against an abortion escort.” So this is, to some extent, a test case for the Biden Department of Justice. We believe if they were to prevail, they would try to take this legal theory to other parts of the country.”

“That’s why it’s an extremely important case,” said Breen. “Folks across the country are watching it. There were no patients involved. No clinic staff.  As far as we know, that’s never been the subject of criminal prosecution by the government.”

Houck, 49, was released on his own recognizance the same day as his arrest at his Kintersville home.

“Think about that. Twenty-five FBI agents go to his home as if he were somehow a danger,” said Breen, who noted the lawyers had offered to bring him in “at no cost to the U.S. taxpayer.”

“It’s clear that intimidation is one of the tactics being used by the federal government,” said Breen. “And I can tell you that I received calls from sidewalk counselors that were intimidated. They’re wondering, ‘Am I going to be next?’”

Pro-life activists plan a rally to support Houck outside the courthouse at 601 Market Street at 11 a.m. on Jan. 24.  A previous rally attracted dozens of supporters.