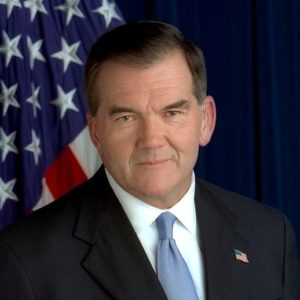 Tom Ridge, a former governor of Pennsylvania and the first secretary of the Department of Homeland Security, was answering his own office phones last week in Washington, D.C. — a sign of how quickly things have changed in America since the coronavirus hit.

Ridge is now in the risk-management business, and he was talking to clients when a reporter called. When asked, he said he thinks the governors have handled the crisis better than anybody.

“As a former governor, I think the governors have it,” he said.

On March 16, Pennsylvania’s Democratic Gov. Tom Wolf, ordered all nonessential businesses in the state to close for 14 days. The week before, he’d ordered all schools in the state to close and issued a directive aimed at restaurants and bars in five of the most populous counties — the four ring counties around Philadelphia (Bucks, Montgomery, Delaware and Chester) and Allegheny County, home to Pittsburgh. They had to close their dining rooms, but could continue to offer drive-through and carry-out service.

Two days later, the first Pennsylvania resident died from the coronavirus — an adult from Northampton County. As of Monday at noon, the Pennsylvania government website  showed 644 confirmed cases across the state, most of those clustered in and around Philadelphia.

“I think he has done a pretty decent job,” Ridge said of Wolf’s response to the crisis. “This is unprecedented.”

Ridge was governor of Pennsylvania when the 9/11 terrorist attack occurred, and President George W. Bush asked him to helm the Office of Homeland Security created in response. He was tasked with writing and implementing a plan to protect the country from future terrorist attacks.

“Listen, I’d rather be pre-emptive,” he said of the coronavirus pandemic. “I’d rather reduce the risk. I remember in anticipation of a major snowstorm coming through the state shortly after I was elected governor, and they’re talking about just dumping feet of snow on the turnpike, on interstates. We closed them. And there was a little heartburn initially, but we didn’t have to send the National Guard out in snowmobiles to pull hundreds of people out of their cars. So I think the governors might be intuitively more inclined to manage the risk.”

“I’m not denigrating anybody in D.C.,” Ridge added, “but we [governors] just have a better feel for our states. And you’ll notice, different states are doing different things.”

Not everyone agrees. Some in Washington want President Trump to issue a national shelter-in-place order, a move he has thus far avoided. And yet, even without federal action, nearly 100 million Americans — about a third of the population — now live in an area where they are either under such orders or face fines for gathering in crowds, due to actions by state officials.

“I suspect, regardless of political affiliation, most governors spend some time in the state capital and a lot of time roaming around their respective states,” he said. “And so I think, for me, it looks like the White House has kind of caught up with some of the governors, although more recently they look like they’re kind of coordinating activity.

“But I’m really proud of what the governors have done, just as a group.”