As members of Fanta Bility’s family grimly looked on, three former Sharon Hill officers pleaded guilty Thursday to 10 counts of reckless endangerment for shooting into a crowd leaving a football game in August 2021.

Eight-year-old Fanta was struck and killed by bullets from the officers’ Glocks in a hail of gunfire that also hit her sister and two others. A fifth person was shot during an argument that precipitated the police actions, officials said.

After accepting the guilty pleas, Judge Margaret Amoroso told Fanta’s mother, Tenneh Kromah, that she has three children and knows “how I feel when someone hurts them.”

“I cannot even imagine how long the pain will go on,” said Amoroso. 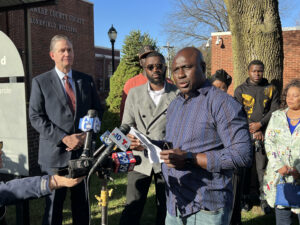 Abu Bility speaks to reporters outside the courthouse.

After the brief guilty plea hearing, lawyer Bruce L. Castor Jr., who filed a civil suit on behalf of the family against Sharon Hill, said the family agreed to the guilty pleas after he explained to them that it would be difficult for the district attorney to get convictions on the manslaughter charges if the case went to trial.

While the reckless endangerment charges could bring a maximum sentence of 20 years in prison, when asked by the Delaware Valley Journal if that was likely given the former officers do not have prior criminal records, Castor said it would be “extraordinarily unlikely” they would be sentenced to the maximum amount of prison time.

“I think that if the case had preceded to trial the judge would have wondered that firing into constantly changing background of people is reckless conduct, while they wouldn’t be punished for going to trial, she couldn’t ignore the unreasonable defense that firing weapons in that fashion is not reckless. So, by pleading guilty, yes these possible sentences are there but they have taken responsibility. In the eyes of the court that will count for something.

“Now the other side of the coin is, we have somebody dead, several people injured and a family ruined,” Castor said.

He also noted the evidence from the officer’s Glock was inconclusive as to who fired which bullet. He explained while newer Glocks are made with precision, it is hard for forensic experts to tell which bullet was fired from which gun, an issue he suggested may require legislation from Harrisburg to address.

Abu Bility, the victim’s uncle, said the family discussed the plea offer beforehand and decided it was in their best interest for “the police officers to take responsibility for their actions, for their dangerous and reckless conduct killing our Fanta…We can as a family finally have some closure.”

“Her mother and her siblings witnessed this tragic incident,” he added. “They will have to live with that trauma imprinted on their memories for the rest of their lives.”

“We also want to make sure Sharon Hill borough is held accountable,” said Kamara. “My family still lives in Sharon Hill today. And the officials, they failed us as a whole in improperly training the police officers.”

“We want to ensure this never, ever happens to a family member in America,” Kamara said. “And the traumatic experience my family faced ever again.”

Castor also mentioned that the officers had not been properly trained to use force in such a situation. He hopes to bring justice for the “failure to properly train and supervise these officers.” 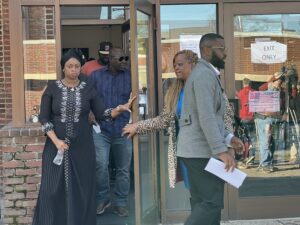 “One of the things that is particularly bothersome to me is I have seen no evidence that these officers were trained in real-life scenarios, with practice, with targets popping up,” said Castor. “And simulate gunfire and graded exercises that are designed to mimic what would happen in real life, like happened this particular evening. It is one thing to stand there shot at a target to have all sorts of noise, people all around, good guys and bad guys, and the chaos of a gun battle going on. And police officers need to be trained to deal with that sort of a situation.”

In a statement released later, the family said, “We support the district attorney’s actions in agreeing to these guilty pleas and we humbly ask our friends, community, and extended loved ones to respect our decision and continue to support us as we seek justice and accountability from Sharon Hill Borough.”

“Fanta’s death was a tragedy for her family, her friends, and for the entire community and nothing that happened in the courtroom today can lessen the grief that we have all felt since that terrible night,” said District Attorney Jack Stollsteimer. “As we have endeavored to achieve justice in the midst of such a tragedy, my office has remained in close communication with the family to ensure that their feelings were heard and respected. Led by the family’s wishes, we have arrived at today’s result. Today’s conviction brings accountability for Fanta Bility’s death.  We will reserve further comment until the sentencing hearing.”

Amoroso scheduled a sentencing hearing on January 12, 2023. She invited both the defense and the family of the victims to provide evidence and testimony to be considered. She said she will review the sentencing guidelines and take all information provided by all parties into consideration before rendering her decision on the sentencing of the three former officers.