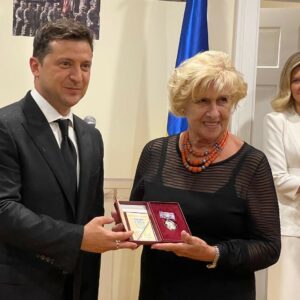 ‘There Is Magic About Him:’ A West Norriton Woman Recounts Meeting With Zelenskyy

“It contained all the elements of the last three weeks,” Andryczyk said. “It was very, very moving…He made an impassioned plea…He’s a leader.”

Andryczyk came to America from Ukraine with her family in 1949 in the aftermath of World War II. She was seven years old when her family settled in Philadelphia.

“We were lucky to have a sponsoring family,” she said.

But now with Russia’s invasion of Ukraine, she is distraught. Andryczyk has cousins and many friends in her native country. She and her husband, Roman Andryczyk, have traveled back to visit Ukraine and even own a condo in Lviv.

“It’s a beautiful town,” she said. “It’s very old and has beautiful architecture.” Many poets, artists, and writers live there, she said.

Ukraine became independent in December 1991 after the Soviet Union dissolved. Some 93 percent of voters approved independence in a referendum, she said.

“And so (Russian President Vladimir) Putin miscalculated,” Andryczyk explained. “He just didn’t understand. Once you open a window and get to inhale that fresh air (of freedom), they got a taste of it. Of course, there were challenges, but they started to prosper.”

But now Putin “comes with his vision of restoring the imperial, the Russian Empire,” she said. “Ukraine would play a subservient role. And of course, the people said, ‘No way.’”

She met her husband at a resort for Ukrainian Americans in the Catskills. She was a stay-at-home mom to her two children and an active community volunteer. Andryczyk also volunteered in Republican politics in Montgomery County and served as a committeewoman and vice-chair of the Montgomery County Women’s Leadership group.

It was her volunteer work that brought her face to face with Zelenskyy in September 2021. At the Ukraine House on Embassy Row in Washington, D.C.  Zelenskyy gave her an award for volunteering, along with 15 other Ukrainian Americans who were honored.

“They brought us into this one room,” she said. Zelenskyy “was a little late. And when he walked in, he’s not a very tall person but there was something about him that commanded respect.”

“We were standing in a semi-circle…and I caught his attention. And his look was just so friendly and so sincere that I liked him immediately,” said Andryczyk.

“I can tell you, there is this magic about him,” she said. Before she met him, she wondered if he would be able to handle the job. Zelenskyy was a former comedian and entertainer before he got into politics. “But he projected calmness and leadership. He made a fantastic impression on us.”

And now, with the Russian invasion of Ukraine, the world is praising Zelenskyy’s leadership and courage. He remained with his people to rally them against Russia when he could have fled the country.

“Congress gave him a standing ovation,” said Andryczyk. “But they did not sound like they’re going to do anything about the no-fly zone. They’re not going to go for that.”

But what Ukraine needs is to stop the Russians from bombing their cities and people from the sky, she noted.

“You feel so helpless when it comes from the sky,” said Andryczyk. “I think he should keep asking for (a no-fly zone).” And she thinks whatever the U.S. and NATO do to help Ukraine should be kept confidential so that Putin does not have “a blueprint.”

There are also nearly 2 million displaced people that need humanitarian aid, she said. Thousands have died or been grievously injured.

In areas that the Russians bombed, “they have no hospitals…no infrastructure,” she said.

When Putin annexed Crimea in 2008 with little pushback from the West, it was a precursor, she said.

“We knew this would happen,” she said. “If we had shown strength even going back to 2008, and when he invaded Georgia. And he took two provinces there. It was somebody else’s territory.”

Andryczyk, like many, fears Putin will not stop with conquering Ukraine but will move on to other countries.

“I speak from my heart,” she said. “I’ve been involved so long and it’s so painful to see this (destruction).”

But she added, “We are very, very pleased and thankful for the support.”

She praised President Joe Biden and Congress for their pledges of aid for Ukraine.

“They’ve done so much more than we truly expected,” said Andryczyk. “We’ve always felt Ukraine is the lynchpin and that Ukraine is fighting Europe’s war.”