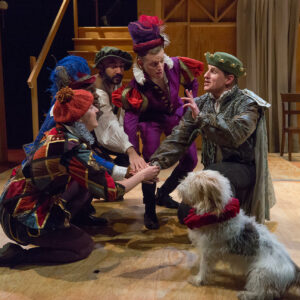 All of life’s a stage, and we’re all merely players. When stages closed due to the COVID-19 pandemic, the future of local community theatre was in question. However, the show most certainly always goes on.

When the pandemic shut down the world, communities everywhere lost their local theaters. While it affected many professionals in the industry in places like New York, Philadelphia, Chicago, and other big cities, it also impacted those locally who enjoy the work they do on stage. This is especially true for theaters in the Delaware Valley area.

Erica Ezold from the People’s Light Theater,  a professional regional theater in Malvern spoke with Delaware Valley Journal about the impact COVID had on People’s Light and how the theater is doing now with restrictions lifted.

“We had to immediately stop our performances,” Ezold said. “March 12, 2020 was the last night of our in-person public performance in our indoor spaces and that was partway through the run of our fourth show for the season. We typically do eight, so that means we canceled three and a half shows. That was pretty extreme.”

Community theatre is often a beacon of hope for those who participate in it, so when the lights went out on stages actors and crew members didn’t know when they would step foot on a stage again.

“We made that decision fairly quickly,” Ezold explained. “We sort of knew we had a choice to either hibernate and shut down and not do anything, or to find other ways of being open and that was really a priority for us in terms of being able to connect with the community and still be a place for people to gather and sustain some hope in a really dark time.”

For many local theaters, this meant choosing to either shut down entirely until restrictions were lifted or doing other forms of productions to keep people connected to their community. Some forms were virtual performances done over Zoom or pre-recorded videos filmed by the actors compiled and posted on YouTube. 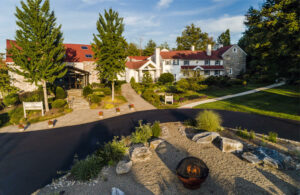 “We also have a for-profit subsidiary called The Farmhouse at People’s Light, which is a restaurant and a full-service catering facility,” Ezold said. “And so we needed to shut that down as well, and there were weddings on the books that were canceled. We were able to reopen the restaurant in June and sort of pivoted to offering take-out, and then in July, we started holding events that were much smaller, of course, because they had to be and were predominantly outside.

“We’re fortunate at People’s Light because we have a seven-acre campus. Once things started reopening in June, we knew we couldn’t gather people in our theater but we started to think about what other ways we could bring people together on our campus in a safe way.”

People’s Light set up two different programs last summer as its way to keep the theater going. The first was a lineup of drive-in concerts. Audience members got to drive up and watch the live bands from the safety of their cars. The restaurant was open for these events, so the audience members could order food and have it delivered right to their vehicles.

“This past year, we offered four digital productions, three of which we produced and one was a production we licensed from another theater company,” Ezold added.

The other program was for children ages two to eight. It was located in the green space between two buildings on the People’s Light campus, and it was called “Folktales in the Garden.” Two original folktales written by the staff were performed by two actors for the children, and it was a great success.

These programs and productions were significant successes for People’s Light and helped keep the community interested in the theater but didn’t generate much revenue.

In terms of financial support, Erica explained People’s Light would typically see about 45 percent of earned revenue and 55 percent contributed in a normal year. However, in the last year with the pandemic, those numbers have shifted drastically to 89 percent contributed and only 11 percent earned. A big part of that contributed support came from government relief programs such as the Paycheck Protection Program loans and the Shuttered Venue Operating grant program from the SBA.

Harvey Pearlman has been doing community theater for more than 20 years. He also spoke with DVJ about the theaters he works with, such as Beth Sholom Synagogue, Methacton Community Theater (MCT) Jenkintown Music Theater. Pearlman also works with his local high school’s theater department.

“It’s been very hard for people like me and my group of friends who really have not been able to perform or be involved in a live performance in almost two years at this point,” Pearlman said.

Pearlman has noticed that as things start reopening, there’s a lot of excitement for community theatre to come back.

“We’re set for our first auditions for I think August 8th, but we have all of our time slots filled. We’re going to have 25 people in this cast maybe, and I think 75 to 80 want to audition for it,” Pearlman mentioned.

There’s a strong sense of bonding and community that comes with being involved in local theatre that many individuals of Delaware Valley have desperately missed.

“There’s tremendous starvation to get back on stage,” Pearlman stated. “It’s obvious in the amount of people who signed up.”