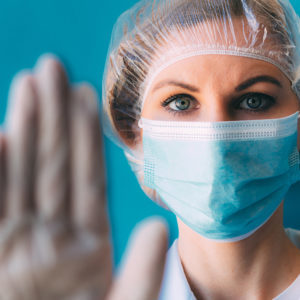 The Other COVID Crisis: Counterfeit Masks and Fake Vaccines

Two weeks later, Tower Health revealed it had been defrauded on a shipment of bogus N95 masks, thousands of which it had shipped out to its hospitals from Berks County to Philadelphia.

“On February 3, Tower Health was notified by 3M that we had been a victim of a delivery of counterfeit 3M 1860 N95 masks,” Tower said in a statement. “Other health care providers nationally and globally have been victimized by fraudulent personal protective equipment (PPE) supplies.”

Tower Health is right. The onset of the COVID-19 pandemic unleashed a flood of counterfeit and substandard health products onto the U.S. market. It was the subject of a panel entitled “The OTHER COVID Crisis: Counterfeit Goods and the Black Market,” hosted by InsideSources on Thursday.

“It’s monumental, I don’t know if there’s a scale to measure it—the level of fraud we’ve seen since the start of the pandemic,” said Matthew Albence, former acting director of U.S. Immigration and Customs Enforcement, one of the roundtable participants.

But while the volume of counterfeit goods may be new, the crime itself isn’t, said Jay Kennedy, Assistant Professor, School of Criminal Justice/Center for Anti-Counterfeiting and Product Protection.

“There’s nothing novel or new about the way the black market is funneling products to legitimate consumers. It’s just that they have switched the products to something that has been COVID-19 focused and hyperfocused on products that many people believe are there to protect them. The internet is propagating things, and that misinformation is juxtaposed with fear,” Kennedy said.

No one was surprised about the counterfeiting of COVID-19 PPE products, according to Kennedy. The problem was just more prominent when it came to the pandemic because of people’s distress over the health of themselves and their family members.

“In normal situations, consumers would have the time to step back and examine things and look for cues that would tell them things are elicit or not,” Kennedy said. “Because we have people who have been targeted who are immunocompromised, who are older adults, populations who were perceived at risk at the beginning stages of the virus, we didn’t know what was going on. They are the perfect targets for counterfeiters because they can play off of those fears.”

In January, police in Washington state charged a man who was allegedly offering to inject customers with a COVID-19 vaccine for $400 to $1,000 with introducing misbranded drugs into interstate commerce, according to a press release from the Department of Justice.

Johnny Stine, of Redmond, Wash., claimed to be the founder and president of North Coast Biologics and was allegedly soliciting customers online.

“The very idea that someone would prey upon fearful people seeking a COVID vaccine in the midst of a global pandemic is not only despicable but potentially deadly behavior,” said Robert Hammer, Special Agent in Charge of Homeland Security Investigations operations in the Pacific Northwest.

When it comes to trying to avoid the counterfeit products that are being sold to consumers such as masks and vaccines, Albence said the general rule of thumb they were trying to get out was that if it looks too good to be true, then it probably is.

“One of the big tools in the toolbelt has to be a really strong public campaign to warn people of the dangers and how to prevent yourself from being scammed or victimized. We were trying to drive traffic to the DHS website to get people the facts.”

Hernan Albamonte, Head of Illicit Trade Prevention U.S., Philip Morris International said products being sold online makes the existing problem even worse because websites can very easily be manipulated to look legitimate, making it easier for people to be fooled by them.

“Online creates a great amount of anonymity for whoever is trying to do business there,” Albamonte said. “Obviously, it’s easier than in real life and that is where there is this big challenge for enforcement from the private sector because you may bring down a site but tomorrow there will be three more. It’s a whack-a-mole game all the time.”

PMI has had decades of experience fighting illicit trade, and recently signed a memorandum of understanding with U.S. Department of Homeland Security to support illicit tobacco trade operations and other intellectual property rights investigations. Albamonte noted during the webinar that terror organizations like ISIS have used counterfeiting networks to fund their operations.

Last summer, ISIS was operating a website called FaceMaskCenter.com that claimed to be selling much-sought-after N95 face masks, Tyvek suits, and other PPE equipment. It was eventually shut down by the Department of Homeland Security, who left the message “This domain has been seized” across the page.

In the end, all three panelists advised those who may be worried they are buying fake COVID-19 products should do their research and think about if the price matches the product they are purchasing.

“The solution comes with partnership for all of those who are involved,” Albamonte said. “I think the rule of thumb is if it’s too good to be true then do not buy those things because it’s unlikely that you will find amazing discounts on things and that’s not the case. If you are going to look for a vaccine online you should know there’s a big risk that it is going to be counterfeited for sure.”