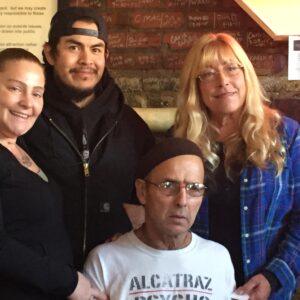 The ‘Last Stop’ Offers Hope for Drug Addicts in Kensington

Driving through the Kensington neighborhood of Philadelphia, you might think it was a war zone. And that would be accurate if it’s the “War on Drugs” that America has been losing since President Richard Nixon coined the term.

Here and there, people stand on sidewalks staring into space or in small groups with their belongings on the sidewalk nearby.

Amid the chaos, rubble and squalor, is one point of light: The Last Stop, an Alcoholics Anonymous/Narcotics Anonymous clubhouse on Somerset Street. Founded by Ed “Eddie Z” Zampitella around 30 years ago, the club offers food and solace to many of those addicts who are trying to turn their lives around.

Zampitella, who got hooked on sniffing glue as a child, said running the club helps him stay sober. In addition to food, there are AA and NA meetings.

Zampitella struggles with addiction himself. He was sober for 25 years then had a relapse and is now sober again for four years.

“The main thing is I’ve got four years,” he said.

Nowadays, the drug of choice for many is fentanyl. It’s been flooding in, through the mail from China and through the wide-open southern border. There were more than 100,000 drug overdose deaths nationally from April 2020 to April 2021, The Wall Street Journal reports. In 2020, 1,214 people died of overdoses in Philadelphia, according to a city health department report, an increase of 6 percent from the previous year. Fentanyl was involved in 81 percent of those deaths. In the first quarter of 2021, 306 people died of drug overdoses in Philadelphia compared to 265 the same period of 2020.

Oddly, the city recently announced a pilot program for Narcan vending machines in the south and southwestern sections of the city, not Kensington.

“Fentanyl, crack, alcohol, people are broken,” said Zampitella. “They want to escape from whatever happened in the past. Just on this block we had seven people die (in about four years). Just on this block alone. But don’t forget a lot of people stayed sober. We’re here for that one person who comes in the door.” 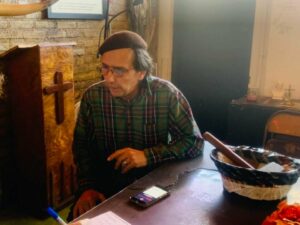 A wall in The Last Stop bears the names of patrons who died. An opposite wall has the names of those who are sober and alive. Although, Zampitella grew up in Kensington, many people who come there to buy drugs are from the suburbs. And people come from up and down the East Coast, having heard that they’ll have easy access to drugs.

One case that broke Zampitella’s heart was a young Bucks County mother, who had been told by a doctor to stop using methamphetamine because of her heart condition.

“She looked horrible. I wanted to see if she wanted help. She said she had a boyfriend. I said, ‘You have a boyfriend and he’s letting you look like this?’ And she didn’t get help. She didn’t want to leave. And two weeks later, she OD’d.”

“Because I’m from the neighborhood I know those who don’t belong,” he said when asked how he knew people from the suburbs are there. He will talk to people and ask them where they’re from and what they do for a living to try to get them to open up and maybe get sober.

“For some reason, Kensington, because it’s on Facebook, they come here and they get caught up in the mess. The drug scene. They’re homeless because they’re using drugs. They’d sleep in a tent,” he said.

“Before they even come down a lot of them are broken, maybe molested,” he said. There can be family issues or “they were teased as kids. There are other problems before they come down here.” 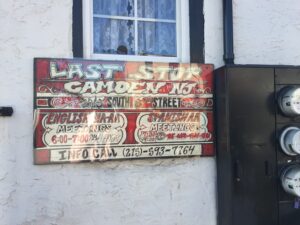 Zampitella, 65, spoke to the Delaware Valley Journal in the club, where free peanut butter and jelly sandwiches are handed out for lunch. Spaghetti or hot dogs and beans might be on the menu for dinner. A Saturday dessert favorite is banana splits. The food, along with water, is free. Coffee is 75 cents and soda is $1.

Zampitella never learned to read as a kid and relies on Christi McGough, who helps him manage the club. And he has opened two other AA/NA clubs, one in Camden and recently another in Chicago.

Asked about funding, Zampitella said while they are not a nonprofit for tax purposes people donate, sometimes in the name of a relative who has gotten help.

Zampitella is divorced with two grown children. He said his “selfishness” caused the breakup.  Zampitella is now very religious. A Catholic, he said he models his life on Dorothy Day, an activist and a founder of the Catholic Workers Movement. Pope Francis called Day one of four “exemplary Americans.”

“Eddie Z cares more about the health and survival of the struggling unfortunates on Kensington Avenue than he does about himself,” said Main Line TV filmmaker John Riccuitti, who, with Jill Frechie, spent more than a year in the blighted neighborhood making the documentary film “Kensington in Crisis.”   “He has unselfishly helped hundreds conquer the terrible disease of addiction.”

When he’s helping addicts reach sobriety, Zampitella takes them to Graffiti Pier, an area of railroad trestles next to the Delaware River, and sits with them while they detox. That process can last varying amounts time but he and others at The Last Stop are patient, he said. 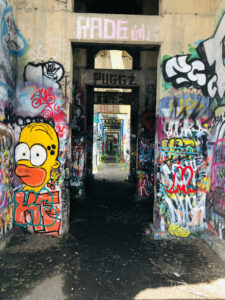 “You go down and they’ve never seen anything like that, the quietness, the fresh air, the water, there’s no noise,” he said. “They see the graffiti. There’s nowhere to cop drugs at. Something happens. People, I get Muslims, Jews, I say, ‘Look, your God was dope. You believed in that and it didn’t work for you. Just give it a shot.’” But, he said, he is not trying to change anyone’s religion.

“The best thing for us is to live by example,” he said. “The kindness. The graffiti Pier, I’m not saying it has magic. It’s us.”

For Thanksgiving, The Last Stop is having a free turkey dinner around 9 p.m. after the 8 p.m. meeting. Call Christi for information at (732) 547-3582 for information or to make a donation.