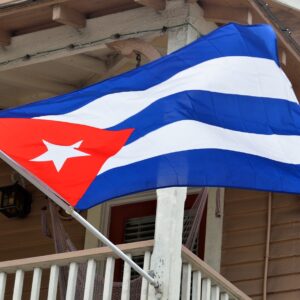 The Delaware Valley Reacts to Protests in Cuba

In the largest anti-government protests in more than a decade, thousands of angry Cubans poured into the streets on Sunday, demanding liberty and decrying conditions under the island nation’s Communist regime. The Cuban government has since shut down internet access so news is harder to come by, but Cuban Americans and their allies are showing their support for the protests.

“Cuba’s oppressive Communist regime and socialist policies have left Cubans without food and other necessities. The government has resorted to violence and silencing voices by blocking internet and cell service,” said U.S. Rep. Brian Fitzpatrick (R-Bucks). “I stand with the Cuban people and their fight for freedom, and I will work with my colleagues in the Pennsylvania delegation to make sure we hold the Cuban government accountable for its human rights abuses.”

Opposition to the Cuban regime in Pennsylvania was bipartisan.

“I stand in solidarity with the Cuban people and their unwavering call for freedom after many decades of oppression and economic hardship, which has only been accelerated by the COVID19 pandemic,” said former Democratic state Rep, John Cordisco. “It is troubling to watch the Cuban government crackdown on peaceful protesters. My heart goes out to those in Bucks County and across Pennsylvania who still have family in Cuba. I am praying for all affected families at home and in Cuba who are suffering in the wake of this humanitarian crisis.”

A group calling itself Cubans of Philadelphia Metro released a series of statements: “People were protesting because they want freedom. It has zero to do with COVID or vaccines.

“As you may have noticed, the protests are over. This already happened before, during the time we Cubans call ‘the special period.’ This happened in the 90’s. The shortages of basic needs like food were so bad, people were eating cats, pigeons and any other animal they could get their hands on. Eventually, crowds gathered in protest. A day or two into the protests, Fidel (Castro) personally met the crowds, with tanks in tow. Everyone went home. This is what happened again now.

“While Fidel is no longer around, the communist running the country, sent out heavily armed police and the military. Everyone went home again. The reality of Cuba is that an unarmed citizenry cannot accomplish anything against a heavily armed government. The U.S. is not going to intervene due to the possibility of complications with Russia and China. Nothing is going to change for Cubans unless a military coup happens which is very unlikely due to how well the Cuban government takes care of the military.”

American politics has long been divided on its view of the Cuban government under Fidel Castro and, later, his brother Raul. Fidel Castro came to power in 1959 and ruled for decades as a dictator who imposed socialist politics and economics on his people.

“As other countries in the region turned away from authoritarian rule, only Fidel Castro’s Cuba continued to repress virtually all civil and political rights,” said José Miguel Vivanco, Americas director at Human Rights Watch. “Castro’s draconian rule and the harsh punishments he meted out to dissidents kept his repressive system rooted firmly in place for decades.”

And yet American progressives have continued to praise the Castro regime for years. Sen. Bernie Sanders (I-Vermont) has repeatedly touted Castro’s leadership, and California Rep. congresswoman Karen Bass called Castro’s death a “great loss to the people of Cuba.”

In 2014, President Barack Obama began the process of normalizing relations with the Cuban regime, a move opposed by many Cuban Americans.

And President Joe Biden promised negotiations with Cuba a part of his campaign. However, he has placed his plans to roll back Trump-era sanctions on hold. When asked recently, White House press secretary Jen Pskai responded, “A Cuba policy shift is not currently among President Biden’s top priorities.”

Some media reports have suggested the uprising in Cuba is in response to COVID-19, not communism. The nation’s economy is heavily reliant on tourism and the hard currency tourists bring. However, during a Republican National Committee press conference on Wednesday, Jorge Luis Garcia Antunez rejected that argument.

“It is important to say this because some media outlets are minimizing what is happening in Cuba,” Antunez, who served more than 17 years as a political prisoner in Cuba, said through an interpreter. “It is sorry to us to hear (that) people are in the streets are demanding vaccines because of Coronavirus and this is not a fact, this is not true.

“They are demanding their freedom. They are screaming for freedom and they demand the tyranny to be over and just leave the country. Hunger, pandemics, and misery are secondary after what is really important for the Cubans today, which is freedom,” Antunez said.

Across the United States, social media is bursting with posts displaying ‘#SOSCuba’ and ‘#CubaLibre’.

The local Philadelphia restaurant of the same name, Cuba Libre, expressed its support for the protests on Instagram. “Our name is our hope for Cuba’s future. We stand in solidarity with the Cuban people.”

Emily Antrilli, MFA, is a freelance writer and educator in the Greater Philadelphia Area. She wrote this article for the Delaware Valley Journal.