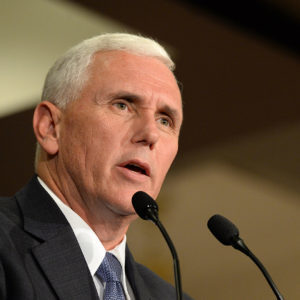 TEXT: Pence’s Letter to Congress Announcing He Will Not Interfere in Electoral College Vote Count

Below is the text of Vice President Mike Pence’s letter to the members of Congress and released by his office regarding his decision not to block attempts to count the Electoral College votes as requested by President Donald Trump. A graphic image of the letter is available here.

Today, for the 59th time in our Nation’s history, Congress will convene in Joint Session to count the electoral votes for President of the United States. Under our Constitution, it will be my duty as Vice President and as President of the Senate to serve as the presiding officer.

After an election with significant allegations of voting irregularities and numerous instances of officials setting aside state election law, I share the concerns of millions of Americans·about the integrity of this election. The American people choose the American President, and have every right under the law to demand free and fair elections and a full investigation of electoral misconduct. As presiding officer, I will do my duty to ensure that these concerns receive a fair and open hearing in the Congress of the United States. Objections will be heard, evidence will be presented, and the elected representatives of the American people will make their decision.

Our Founders created the Electoral College in 1787, and it first convened in 1789. With the advent of political parties, the Electoral College was amended in 1804 to provide that Electors vote separately for President and Vice President. Following a contentious election in 1876, with widespread allegations of fraud and malfeasance, Congress spent a decade establishing rules and procedures to govern the counting of electoral votes and the resolution of any objections.

During the 130 years since the Electoral Count Act was passed, Congress has, without exception, used these formal procedures to count the electoral votes every four years.

After a careful study of our Constitution, our laws, and our history, I believe neither view is correct.

The President is the chief executive officer of the Federal Government under our Constitution, possessing immense power to impact the lives of the American people. The Presidency belongs to the American people, and to them alone. When disputes concerning a presidential election arise, under Federal law, it is the people’s representatives who review the evidence and resolve disputes through a democratic process.

Our Founders were deeply skeptical of concentrations of power and created a Republic based on separation of powers and checks and balances under the Constitution of the United States.

Vesting the Vice President with unilateral authority to decide presidential contests would be entirely antithetical to that design.  As a student of history who loves the Constitution and reveres its Framers, I do not believe that the Founders of our country intended to invest the Vice President with unilateral authority to decide which electoral votes should be counted during the Joint Session of Congress, and no Vice President in American history has ever asserted such authority. Instead, Vice Presidents presiding over Joint Sessions have uniformly followed the Electoral Count Act, conducting the proceedings in an orderly manner even where the count resulted in the defeat of their party or their own candidacy.

As Supreme Court Justice Joseph Bradley wrote following the contentious election of 1876, “the powers of the President of the Senate are merely ministerial. .. He is not invested with any authority for making any investigation outside of the Joint Meeting of the two Houses … [I]f any examination  at all is to be gone into, or any judgment exercised in relation to the votes received, it must be performed and exercised by the two Houses.” More recently, as the former U.S. Court of Appeals Judge J. Michael Luttig observed, “[t]he only responsibility and power of the Vice President under the Constitution is to faithfully count the Electoral College votes as they have been cast,” adding “[t]he Constitution does not empower the Vice President  to alter in any way the votes that have been cast, either by rejecting certain votes or otherwise.”

It is my considered judgment that my oath to support and defend the Constitution constrains me from claiming unilateral authority to determine which electoral votes should be counted and which should not.

While my role as presiding officer is largely ceremonial, the role of the Congress is much different, and the Electoral Count Act of 1887 establishes a clear procedure to address election controversies when they arise during the count of the vote of the Electoral College. Given the voting irregularities that took place in our November elections and the disregard of state election statutes by some officials, I welcome the efforts of Senate and House members who have stepped forward to use their authority under the law to raise objections and present evidence.

As presiding officer, I will ensure that any objections that are sponsored by both a Representative and a Senator are given proper consideration, and that all facts supporting those objections are brought before the Congress and the American people. Those who suggest that raising objections under the Electoral Count Act is improper or undemocratic ignore more than 130 years of history, and fail to acknowledge that Democrats raised objections in Congress each of the last three times that a Republican candidate for President prevailed.

Today it wi11 be my duty to preside when the Congress convenes in Joint Session to count the votes of the Electoral College, and I will do so to the best of my ability. I ask only that Representatives and Senators who will assemble before me approach this moment with the same sense of duty and an open mind, setting politics and personal interests aside, and do our part to faithfully discharge our duties under the Constitution.  I also pray that we will do so with humility and faith, remembering the words of John Quincy Adams, who said, “Duty is ours; results are God’s.”

Four years ago, surrounded by my family, I took an oath to support and defend the Constitution, which ended with the words, “So help me God.”  Today I want to assure the American people that I will keep the oath I made to them, and I will keep the oath I made to Almighty God. When the Joint Session of Congress convenes today, I will do my duty to see to it that we open the certificates of the Electors of the several states, we hear objections raised by Senators and Representatives, and we count the votes of the Electoral College for President and Vice President in a manner consistent with our Constitution, laws, and history. So Help Me God.

Vice President of the United States