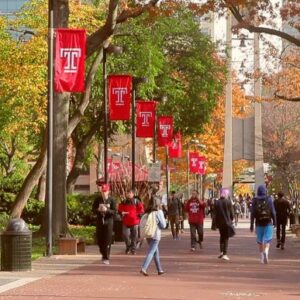 In response to the murder of one of its students, Temple University President Dr. Jason Wingard said in a campus-wide email it will “work with the Philadelphia Police Department to increase their presence off campus,” to boost student security.

The move comes after a year in which Temple administrators and students have debated and occasionally embraced facets of the “Defund the Police” movement, which sprang up in the wake of the killing of George Floyd in Minneapolis, an event so shocking it ignited a new, national reckoning on race.

The university is currently working to quell fears after Samuel Collington, a 21-year-old senior at the university, was shot and killed in the middle of the day within blocks of the campus.

Besides increasing patrols in cooperation with Philadelphia Police, Wingard also promised to “increase our Campus Safety force by 50%” and to “collaborate with city leaders to expand anti-violence initiatives to reduce shootings and homicides in North Philadelphia and across the city.”

Last June, however, the mood at Temple was more about distancing itself from Philadelphia Police.

“In the past, Temple has provided a small amount of support to the Philadelphia Police Foundation through charitable donations,” university president Richard M. Englert said in a brief statement. “Upon review and community input, we have decided that the university will no longer provide this support,” and that the funds would be reallocated “to support social justice programs at the university.”

The Philadelphia Police Foundation is an IRS-recognized nonprofit where funds “go directly toward providing critical equipment, technology, training and innovative programs to help the Philadelphia Police Department improve public safety and enhance service to the city,” according to the foundation’s website.

“Over the past three years, Philadelphia area individuals, businesses and foundations have generously contributed over $2.0 million to underwrite over a dozen of the Department’s most critical, but unbudgeted priorities,” the website adds.

A request for comment to the university on the shift in attitudes toward police was not returned.

Despite the political pressures that emerged from the Floyd killing, the university rebuffed a petition on Change.org from earlier in June 2020, that called for a total severing of all ties between the university and Philly police.

“Temple University claims that ‘racism within our community is not tolerated,’ but they are willing to fund the very institution that suppresses the message of #BlackLivesMatter in our city,” the petition read. “It is well known that Temple has been actively gentrifying North Philadelphia for decades, and has expanded its police surveillance beyond campus through its ties with Philadelphia Police.”

Wingard was joined by Provost JoAnne A. Epps and Chief Operating Officer Kevin G. Clark in a lengthy statement pushing back on the idea.

“We do not believe that [severing all ties with Philadelphia police] would be in the best interest of Temple students, faculty and staff, and our neighbors in the surrounding community,” they said.

“Shared responsibilities and patrols among the Temple Police Department, our Allied Universal security partners and the Philadelphia Police Department help keep us safe by providing effective layers of service and protection for the Temple community and residents in nearby neighborhoods.”

The Change.org petition and subsequent rebuff from the University came before the decision to stop making donations to the Philadelphia Police Foundation, but the original petition also highlighted that link.

“It is time to say it loud and clear that we as students, alumni and residents of Philadelphia firmly oppose Temple’s active participation in militarizing our police force. #DefundthePolice”, the petition said.

Meanwhile, police identified 17-year-old Latif Williams as a suspect in Collington’s murder. Williams turned himself in to police.

Court records show that he was charged with five felony counts related to an alleged carjacking in July.

Those charges were later withdrawn.

“[A] key witness for the Commonwealth did not appear in court, forcing our office to withdraw the case at that time. That incident, which took place in August, remains under active investigation, and our office continues to pursue accountability for that crime,” a spokesperson for the Philadelphia district attorney’s office said, according to ABC6.

The university is holding a community hearing at 5 p.m. Thursday to discuss safety issues.

The debate over how to provide the necessary security to the campus comes as Philadelphia crossed the mark of 500 homicides in a year on Thanksgiving. The city had only previously reached that mark one other time since the statistic has been kept since 1960.

As of Dec, 7, the Philadelphia Police crime statistics page showed that the city now counts 523 homicides this year.