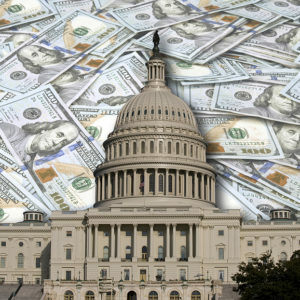 By the end of 2023, the U.S. national debt will surpass $33 trillion, which amounts to roughly $100,000 for every man, woman, and child in the country. How is the wealthiest nation in the history of the world drowning in debt? The answer is simple: Congress has a spending problem.

It has been two and a half decades since Congress did its job and passed appropriations through the ordinary deliberative process. Instead, every year around this time, lawmakers play a ridiculous game of brinksmanship, forcing a choice between a government shutdown, a continuing resolution, or the worst option of all, a massive omnibus loaded up with every conceivable form of grift, pork, and waste.

This year, the grift includes over $70 million in salmon subsidies, a $3 million bee highway, $575 million for the government’s Malthusian “plants over people” program, monuments for service animals, and an endless list of nonsense that will cost taxpayers nearly $2 trillion. They are just a fraction of the waste in this bill; others are priced in the billions.

Amid a historic border crisis that has seen nearly 2.7 million illegal aliens enter our country in the last year, the omnibus will prevent the United States from effectively securing our southern border for at least another nine months while providing over $400 million to secure the borders of countries in the Middle East. It doubles the number of low-skilled immigrant work visas, depressing wages for American workers. Even worse, it provides hundreds of millions of dollars for woke race hustlers employed in the diversity, inclusion, and equity industry.

What else does it include? Nobody knows, because no one – not a single lawmaker – has (or will have time to) read all 4,155 pages of this abomination.

When I was a staffer for House conservatives tasked with reading, analyzing, and summarizing horribly large bills like this, the one thing my colleagues and I wanted was more time — time to truly understand what is in the bill, how it relates to current law, and what conservatives should do about it for the American people. But the American people aren’t the priority in these bills; the focus is pushing the far-left agenda.

With many Republicans in the Senate caving to this monstrosity, millions of conservative voters are asking themselves a simple question: Why did we elect Republicans? Why did we walk countless miles knocking on doors, spend hours phone banking, and donate our hard-earned money to help Republicans win if many were just going to collaborate with liberal Democrats to enact their agenda and not wait for Republican reinforcements in the House to be sworn in just a couple of weeks from now?

Every Republican member of the House and Senate should vote against the omnibus or be prepared to face an embittered conservative base with long memories.

And once this omnibus is defeated, the incoming Republican House majority should adopt an automatic failsafe measure that simply extends funding at current or lower levels, so even if lawmakers miss spending deadlines this nonsensical brinksmanship can be avoided. Congress’ job should be to reduce spending from that ceiling, not increase it.

While simply rubber-stamping last year’s budget through a continuing resolution is certainly less than ideal for a government that needs to cut serious expenses, it is far better than the alternative of constantly passing huge omnibuses that only deal lasting damage to both our country and the conservative movement.

Paul Teller is executive director of Advancing American Freedom, and he served as a White House liaison to congressional conservatives during the Trump-Pence Administration. He wrote this for InsideSources.com.