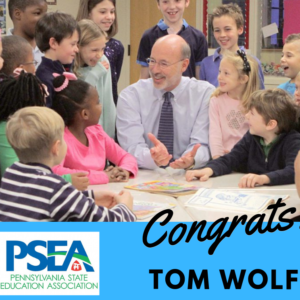 A powerful group of teachers’ union officials, including the Pennsylvania State Education Association and the American Federation of Teachers, met twice with two of Gov. Wolf’s top chiefs of staff in the runup to the administration issuing new guidance for school reopenings in the fall of 2020.

The administration’s guidance, issued on Aug. 10, led to many school districts abandoning plans to return to full, in-person learning for the 2020-2021 school year.

Both meetings were labeled on the calendars as “Re: School Reopening.”

The PSEA quickly praised the guidelines after they were announced on Aug. 10.

“These new reopening measures are guidance for our schools, and I strongly encourage all schools in Pennsylvania to follow them,” PSEA president Rich Askey said in a news release.

The administration repeatedly stressed that their metrics were only guidelines, and that school districts could make their own choices. It’s clear, however, that many districts hastily shifted gears.

For example, “[In July 2020], Lower Moreland District leaders said students would be able to come to school all five days. Now, at a school board meeting scheduled for Tuesday night, they’re going to scale that back and recommend a mix of virtual at-home learning and in-person in response to this new guidance,” an Aug. 11 report from 6ABC noted.

A roundup of district plans in the Lehigh Valley showed a handful of districts there also dramatically changed course, in moves that collectively impacted tens of thousands of students and their families.

“The [Northern Lehigh School] district was planning for a full return to school but updated their decision on Aug. 10 after the recommendations made by the state,” the report said.

“After initially planning on a full return to school, the [Pen Argyl] school district has opted for a hybrid model to start the year,” the report also noted.

Hagarty’s calendar indicates he was likely the administration’s point person on the project. His calendar even contains an entry titled, “School Closure Guidelines.”

The guidelines drew bipartisan critique in a legislative hearing just 10 days after they were announced.

Former State Senator Andy Dinniman (D-Chester County) said, “school leaders across the state fear that ignoring the state guidance will make it difficult for schools to get insurance and lead to lawsuits if something should occur,” according to a report from PennLive.

Then-health secretary Dr. Rachel Levine told lawmakers that the administration issued the guidance because superintendents and school boards were specifically requesting it.

Rep. Jesse Topper (R – Bedford) echoed that idea, saying local control was a key frustration for him at the time.

“We went to the school districts and we said, ‘We want to give you this autonomy,’” Topper told Broad + Liberty Tuesday, after being told of the calendar revelations.

“And I think at the end of the day, there were a lot of school districts that didn’t want to make the tough decisions when it came to reopening, whether they were getting pressure internally from their own union members not wanting to go back or they were getting pressure from, you know, the parents to come out with a plan. But it felt to me like school districts really were buckling under that pressure of not coming up with their own plans and therefore asking for more guidance when we thought it should be open the school district.”

Requests for comment to the Wolf administration, the PSEA, and AFT were not returned.

Some districts did make their own choice, however.

“The Souderton School District in Moncto opened for in-person education five days a week right after Labor Day in 2020 and they did it safely,” said Liz Preate Havey, the chair of the Montgomery County GOP.

“They are the only school district in Montgomery County that refused to do anything that did not put the children first. The all-Republican School Board made a decision to re-open in person and do whatever it took to do so safely. And they succeeded – the district did not have school spread of COVID! For those like me whose children were denied an in-person education for most of the year, we strongly applaud the Souderton School Board for not bowing to the pressure of the PSEA and putting the best interest of the children first!”

The AFT is currently trying to quell controversy over a similar situation on a national level, regarding its communications with the Biden administration just before officials in the CDC issued updated school reopening guidelines in February.

“You can see why that would lead people to think that you all have a lot of muscle over at the White House when it comes to reopening our schools,” FOX News host Martha MacCallum said to AFT president Randi Weingarten.

“Weingarten defended the correspondence, telling MacCallum that at the time the country was facing ‘the variants that were going on at that moment, that kept the Great Britain schools closed…and we were concerned about it,’” according to a Fox report.

The calendars in this story were obtained via a Right to Know Law request. However, case law does allow governments to prohibit the disclosure of calendars. Even though the Wolf administration could have withheld the documents, they were provided “in the interest of transparency,” according to a lawyer in the administration.