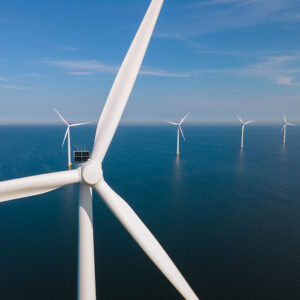 They may be the biggest creatures on earth, but whales have become pawns in a fight over expanding wind power on the East Coast.

In the wake of reports of more than a half dozen whales washed up on beaches along New York and New Jersey, some environmentalists and fishing industry groups are calling for a moratorium on offshore wind projects. They say they believe these deaths are linked to wind technology off the coast. But wind power proponents say the fishing industry and community organizations are getting the facts wrong. There is no evidence linking these recent whale deaths to offshore wind technology.

“More investigation and transparency is necessary to make sure our marine life isn’t a casualty of offshore wind development,” Bonnie Brady, executive director of the Long Island Commercial Fishing Association, said at a recent press conference in Atlantic City.

A series of offshore wind projects are under construction or in the planning stages off Long Island and the New Jersey coast. Gov. Phil Murphy (D-N.J.) says he is committed to wind power as part of the Garden State’s climate policy. He signed an executive order last September increasing New Jersey’s offshore wind goal by nearly 50 percent to 11,000 megawatts (MW) by 2040.

Murphy called the deaths of whales “tragic” but pointed to a statement from the National Oceanic and Atmospheric Administration (NOAA) that no humpback whale has been found to have been killed due to offshore wind activities.

Suzanne Hornick, head of the group Protect Our Coast NJ, said she believes the risk isn’t worth the reward.

“This is going to be an ongoing industrialization of our ocean and for what,” asked Suzanne Hornick, head of Protect Our Coast NJ. “It’s not going to help with climate change but even if it were, what’s the percentage of carbon emissions it will reduce? Will it be enough to have eradicated close to 15 critically endangered species, destroyed our coastal communities, destroyed our ecology and our ocean?”

Wind power proponents say the fishing industry and community organizations are getting the facts wrong. There is no evidence linking these recent whale deaths to offshore wind technology.

“Blaming offshore wind projects on whale mortality without evidence is not only irresponsible but overshadows the very real threats of climate change, plastic pollution, and unsustainable fishery management practices to these animals,” said Anjuli Ramos-Busot, New Jersey Director of the Sierra Club. “There have been many mitigation techniques identified for reducing the threat of offshore wind development to whales and other wildlife. We should focus on implementing these while continuing to push for clean energy.”

Opponents of offshore wind are undeterred. They point to pre-construction activities such as using sound waves that bounce off oceanic structures as a potential source of harm. “Stop carpet-bombing the ocean floor,” said Bonnie Brady, executive director of the Long Island Commercial Fishing Association in Montauk, N.Y.

But despite the apocalyptic talk, Tracey Moriarty with the Bureau of Ocean Energy Management (BOEM), told E&E News a “rigorous” review conducted with NOAA Fisheries found the high-resolution geophysical surveys used in offshore wind are “not likely to harm whales or other endangered species.”

Both sides agree there has been an increase in the number of whales washing ashore from Massachusetts to Cape May. But marine biologists and other experts say that is part of an “unusual mortality event” (UME) scientists have been tracking since 2016.

“Last year there were 18 such strandings along the Atlantic coast of the U.S.—for better or worse, the situation in New Jersey is not exceptional,” said Heidi Yeh, policy director for the Pinelands Preservation Alliance. “The recent humpback whale strandings and mortalities in New Jersey are the tip of the iceberg of an unusual mortality event (UME) that has been occurring since 2016. It is disingenuous to ignore this context in an attempt to lay the blame on offshore wind development that has barely begun.”

NOAA has been clear that no whale deaths have been linked to offshore wind activities. And groups that the pro-whale community says should be natural allies are oddly not. New Jersey Audubon, the New Jersey Sierra Club chapter, and the Surfrider Foundation have all cautioned not to jump to conclusions before investigations are complete.

And, added Yeh, “the body count will be even higher if we do not address climate change, which presents a myriad of threats to the continued survival of these whales.”