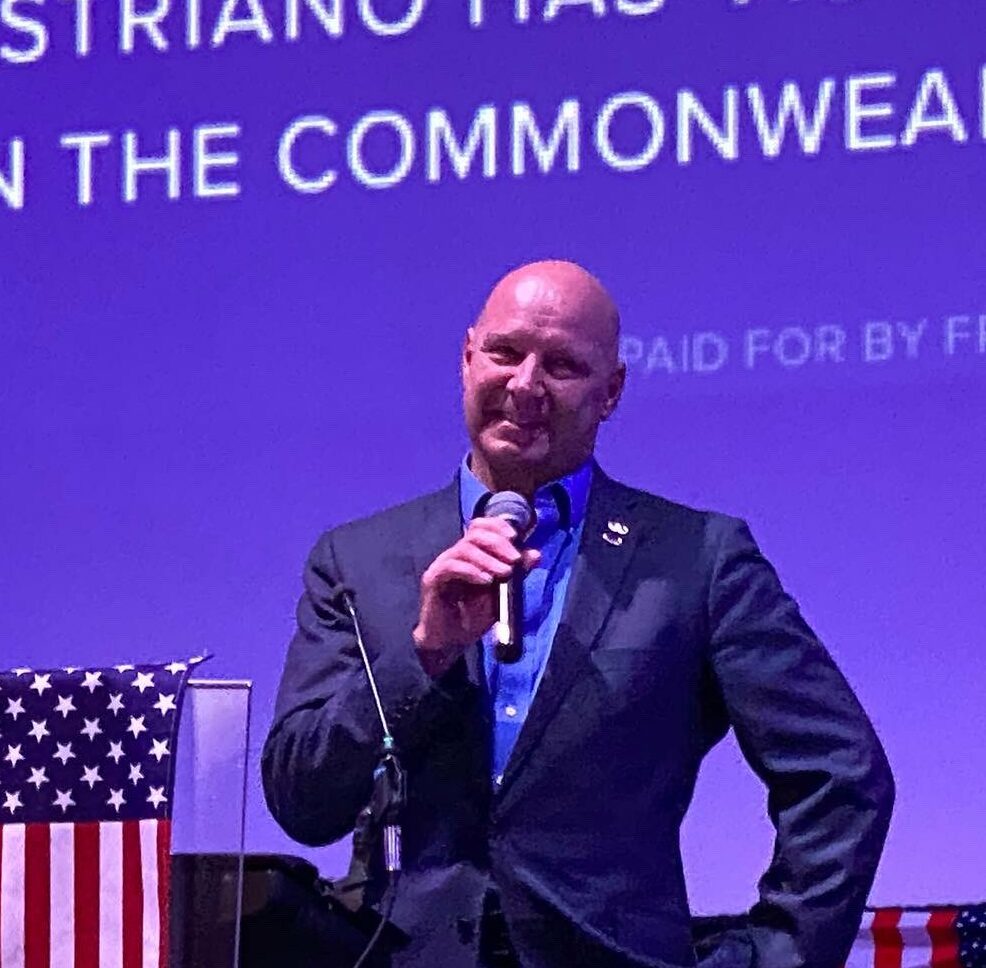 “On his watch as the senior law enforcement official in the state, crime has gone up 40 percent, that alone is disqualifying,” he told some 700 people at the Fuge in Warminster on Saturday afternoon. “He doesn’t want to talk about 1,000 or more carjackings in Philadelphia, a record number of homicides…and he is a complete, utter, and ridiculous failure.”

They can’t keep up  (with digging) the graves with the young people killed in the crossfire, mostly 15, 18-year-old kids,” Mastriano said.

Participants chanted “Doug for Guv.” Mastriano spoke without notes for about 45 minutes, making his case for why voters should elect him governor.

“There’s no time for us to fade away,” he said. “Our country needs every one of us.”

Mastriano said he has offered to debate Shapiro and would allow him to “bring Donna Brazile,” but “he’s chicken.”

Shapiro has turned his back on “mostly women” who are being sex trafficked in the state, Mastriano charged. Instead, Shapiro sued the Little Sisters of the Poor, spending millions in taxpayers’ money to lose in the U.S. Supreme Court, and sued to keep kids in masks and businesses shut down. On his watch, nearly 10,000 criminals were released from jail.

Mastriano promised, “On day one, woke is broke.”

“Parents will have their powers back,” he continued. “There will be full school transparency…all the pornographic books will be pulled out. On day one and done, Critical Race Theory will be thrown out the window. And maybe bring back civics, the constitution, and Pennsylvania history.”

Mastriano said he was being attacked as not supporting women’s rights and called on his wife, Rebbie, to speak. 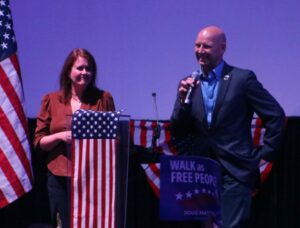 She said Republicans support a woman’s right to be born, to have baby formula, to have a say in her child’s education, raise a child in “a safe community where the government enforces the law, prosecutes crime, and doesn’t let criminals out early.”

“And we believe, as Pennsylvanians, that it’s a woman’s right to the Second Amendment,” she added, drawing loud cheers and applause.

“And we believe it’s a woman’s right to compete in sports that are not dominated by men,” said Rebbie, who also serves as Mastriano’s campaign manager. “They’re trying to cancel us. I know each and every one of you can define a woman and tell some of those in your neighborhood what a woman is. Ladies, we’re going to get out that vote like you’ve never seen before.”

While the Republican nominee trails in the polls, he told the crowd he is waging a grassroots campaign. Since the primary, he has been to all 67 counties, with Bucks, one of the original counties founded by William Penn, as the last.

Mastriano recalled Washington’s “daring raid” crossing the Delaware River from Bucks County to New Jersey, changing the course of the Revolutionary War. He told his supporters they would do the same and “beat back the Democrats and that far, extreme radial, dangerous policy vision they have for our state and nation. We just say no to Shapiro.”

“The Democrats haven’t changed much,” he said. “They don’t have an argument to stand on, so they call names.”

The Democrats are lying and “fearmongering,” he said. “It’s time to take the state back.”

The Democrats have a “laundry list” of things they do not want to talk about, like shutting down small businesses during COVID and the state deciding which could stay open.

“All the cabinet makers across Pennsylvania were shut down, except one. Wolf Industries,” he said. “You could go to strip clubs but not churches. Life under (Health Secretary Rachel) Levine and life under Shapiro.”

“I was in Germany behind the Iron Curtain in 1989 during the Cold War defending us from what the radical left is planning here,” he said. “The godlessness, the evil empire…The fight for freedom is still ongoing for our country, so our job is not done.”

“For our kids and grandkids, we have to win on the 8th of November,” he said. “Our motto is freedom.”

Conservative writer and commentator Jack Posobiec also spoke, saying he grew up in Norristown. He said when drugs flooded that small city, Shapiro was a Montgomery County commissioner and did nothing to help. Norristown has gotten so bad that Posobiec said he has never taken his two sons to see the street he grew up on.

“This (Democratic) cabal took from us, they took from our families, they want to destroy our families,” he said. “The only thing they care about is power.”

David Fiori, Jr. of Yardley said Mastriano “makes a lot of good sense. He’s applying common sense to politics. He has great leadership skills. He relates to everybody. He understands what the stakes are, and he’s not afraid to face the issues of the day.”

A Montgomery Township woman who did not want to give her name said she supports Mastriano because of “schools, taxes, and the economy.”

Mastriano said he had spoken to 500 people in Chester County earlier in the day and had a second event with Gun Owners of America in Bucks County following the Fuge rally. Reports of the “early demise” of his campaign were utterly wrong, he said.

“You ain’t seen nothing yet.”