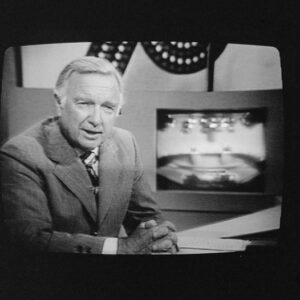 Walter Cronkite was the anchor of “CBS Evening News” for nearly two decades, earning the moniker “most trusted man in America.” He defined the news and shaped opinions by reporting it.

Upon Cronkite’s death in 2009, NPR reported on his influence on ending the Vietnam War when it quoted his “Vietnam is to end in a stalemate” commentary. Cronkite ended his broadcasts with, “And that’s the way it is …,” and in 1960s America, news and opinion were what Cronkite said it was.

Since the “Age of Cronkite,” network news has ceded its position in the news hierarchy to 24/7 cable news outlets; newspapers to online content amalgamators, and news delivery moved from televisions and delivered newspapers to smart devices. This began a process where news became partisan as the focus shifted to keeping subscribers tuned in to your channel.

This evolution continues. The Associated Press reported in 2022 on research by the American Press Institute on how people ages 16 to 40 get their news. The research found, “An estimated 71 percent of this age group gets news daily from social media. …  About a third or more get news each day from YouTube and Instagram, and about a quarter or more from TikTok, Snapchat and Twitter.”

The recent debate surrounding the “Libs of TikTok” Twitter postings highlights a continuing trend toward balkanization of opinion.  Wikipedia captures the flavor of the debate best: “The account promotes harassment against teachers, medical providers, and children’s hospitals, and spreads false claims and hateful commentary against marginalized groups.” The platform reposts videos, many promoting gender fluidity instruction in schools.

On December 27, Fox News opinion host Tucker Carlson interviewed the founder of “Libs of TikTok,” who revealed her identity for the first time. She had kept it secret because there was a campaign underway to dox, silence and cancel her voice. Her name is Chaya Raichik. She said she is a graduate of Harvard and Yale.  Reports state she works in real estate.

As I watched the interview by Carlson, my mind was opened to new insights regarding the current state of opinion formation. First, many progressive posts are seemingly meant only to be seen by the like-minded, arguably to promote “group think” and establish acceptable language that distinguishes believers from heretics. This orthodoxy cannot be questioned or challenged, as the goal is intellectual conformity.

By sharing these ideas with non-believers, namely conservatives, Raichik was committing blasphemy, and her platform needed to be eradicated by true believers. You may often hear the term “thought police” used to define how ideas are suppressed. I think this is how it all works.

The second insight was a fuller understanding of why stories don’t break through with the public or are ignored by legacy media. Social media is now the ultimate filter of truth, and trending is the barometer for the newsworthiness of stories. There is no better example of this than the border crisis.

Fox News has covered it religiously, and correspondent Bill Melugin is on the ground in Texas nearly daily. At another time, his reporting would have qualified him for news industry awards, but not now. The border does not trend, so it does not exist as a news story unless a heretical governor is flying migrants to Martha’s Vineyard.

This helps explain why only 12 percent of Democrats believe it is “completely true” that we are experiencing an invasion on our southern border (NBC/Ipsos poll in 2022).  And why the Biden administration can ignore the issue without paying a political price.

The third insight is how these partisan online communities feed and nurture alpha issues. These issues are highly charged and embraced at the emotional and visceral levels. Around them grow strident voting blocs influencing elections around their climate change, abortion, COVID-19 and gender fluidity beliefs. These issues are creating political third rails as they shut down debate. The “Twitter Files” show how this can be weaponized at the highest levels of government and business.

Republicans are aghast that America is not outraged by the border crisis, parental rights being abridged by school districts, and Hunter Biden’s laptop story. They are misjudging the power and influence wielded online by partisan communities who serve as gatekeepers of opinion.

Republicans are naive to think that campaign ads, Fox News and conservative think tank reports are enough to combat online “thought camps” shaping the politics of future generations of Americans. The “Libs of TikTok” debate has provided a glimpse into how the new system of thought leadership works.