A bipartisan group of lawmakers and more than 20 think tanks across the country have joined the cause of declaring the Sunday after Veterans Day “National Warrior Call Day.” But for Frank Larkin, it is more than a cause. It’s personal.

Larkin’s son Ryan was a highly decorated Navy SEAL operator who saw combat in Afghanistan, Iraq, and Lebanon. According to Larkin, his first indication of issues was his son’s nightmares and trouble sleeping.  He quickly unraveled. Over two years of seeking help, Ryan was prescribed over 40 medications, everything from over-the-counter creams to mood stabilizers. Larkin recalls his son saying he felt like he wasn’t in his own body.

“That’s a common theme you hear from these veterans,” Larkin said. “Physicians are so quick to pick up the prescription pad as opposed to trying to peel back the onion and find out what’s the root cause.”

In Ryan’s case, he suffered from a severe level of microscopic brain injury—undetectable by a PET scan or MRI—uniquely related to blast exposures. As a Navy SEAL, he was constantly subjected to blast pressures. Each exposure was destroying more and more of his brain. Ryan’s diagnosis of a traumatic brain injury came after he committed suicide in 2017. He was 29 years old.

Today, Larkin is chairman of the Troops First Foundation which is promoting the Warrior Call Day cause. The initiative encourages every American to make a phone call to a veteran or serviceman suffering from the effects of war such as post-traumatic stress disorder and traumatic brain injury.

“These invisible wounds are not easy to understand,” Larkin said. “It’s one thing when you look at someone that’s been disfigured or suffers from burns, or lost a limb, which is all very serious in itself, but you can visually see they are injured. It’s when you look at someone else that looks perfectly normal, but they might actually be in worse shape because of how broken they are on the inside.”

The suicide rate in 2019 among veterans was 52.3 percent higher than civilians, according to a VA report. 20 percent of veterans that served in Afghanistan or Iraq suffer from major depression or post-traumatic disorder, according to a RAND study.

In the middle of July, the Department of Veterans Affairs changed its Veteran Crisis Hotline to 988. With that change in number, the VA increased staffing by 50 percent in anticipation of higher call volumes.

Researchers from the Department of Veterans Affairs, identified social isolation as the strongest and most reliable predictor of suicidal ideation. Up to two-thirds of veterans who take their own lives had no contact with the Department of Veterans Affairs. Through the Warrior Call Initiative, Larkin said they are trying to connect the disconnected.

“Many of these veterans and some of the active duty have unfortunately become distrustful of the system that is trying to help them,” Larkin said. “Whether it’s VA services or services within the military, they don’t feel like they have an environment where they can stand up and ask for help.”

“We just don’t have the diagnostics where they need to be right to completely qualify a diagnosis,” Larkin said. “The tragedy is if we’re getting it wrong because we don’t have the right diagnosis then we’re taking people down the wrong path. It might be a contributing factor to some of the suicides.”

According to Larkin, the research and science of those invisible wounds is just part of the solution. Addressing veterans and servicemen living in isolation — particularly through a phone call —is crucial.

The resolution for the Sunday following Veterans Day National Warrior Call Day was first introduced last year in the House by Rep. Liz Cheney (R-Wyo.). Sens. Jeanne Shaheen (D- N.H.), and Tom Cotton (R-Ark.) are leading the movement to pass the resolution in time before Veterans Day this year.

“We all have phones now,” Larkin said. “It’s just simply calling somebody, and you don’t need it to be complicated. It just needs to be a simple, ‘Hey hello, I was thinking about you.” 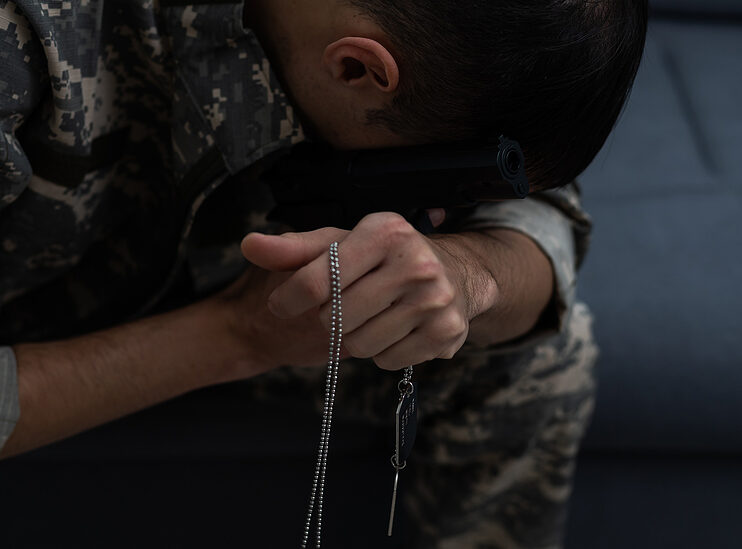 While the Department of Defense (DoD) has created an independent committee to assess its efforts to prevent suicide in the ranks of the military, at least one organization says more needs to be done.

Warrior Call, a nonprofit organization working to prevent veteran suicide, is urging the DoD committee to take action on mild traumatic brain injuries (MTBI) sustained by service members that may lead to suicide. “The DoD commission must examine the prevalence of this condition and recommend better screening to identify personnel with MTBI and treat before they spiral into suicidal behavior,” the group said.

Warrior Call Chairman Frank Larkin said his concern is that “the panel, while an important tool for highlighting any deficit in mental health services and approaches, may not be sufficiently focused on the physiological contributors to suicide. Specifically, the commission should include in its assessment the impact of brain injuries that service members can sustain during regular training and operations.

“Importantly, service members suffering military-related MTBI can present as having other ailments, such as post-traumatic stress disorder, and can go undiagnosed or misdiagnosed,” Larkin said.

Some local Veteran’s Affairs (VA) doctors tell Delaware Valley Journal they agree that misdiagnosed or undertreated MTBIs can impact a person’s physical and mental health throughout their life.

“In MTBI, short-term and long-term memory difficulties and language difficulties can happen over time. Often concurrent with this is behavioral issues that evolve. Things like aggression, irritability, fatigue, and, in some rare cases, paranoia,” said Dr. Keith Robinson, Chief of Rehabilitation Services at Corporal Michael J. Crescenz VA Medical Center in Philadelphia.

Over his career, Robinson has found flaws in the way MTBIs are graded. For example, both the VA and the DoD adopted the well-known Glasgow Coma Scale, which assesses severity at the point of the event that caused the injury. But Robinson says that’s not a good indicator of recovery or functional trajectory.

“Some traumas classified as severe injury can have remarkable recoveries with minimal deficits over time. What we see, if you’re classified as mild, with no motor sensory or physical involvement, is that cognition and behavior problems over time can become quite severe,” Robinson said of his experience with TBI patients.

It is a trend seen across the mental health field, too. Chief of Behavior Health and Director of Mental Illness Research and Education Center, Dr. David Oslin, works with patients who have experienced TBIs.

“My specialty is addiction. A fair number of patients have had TBI–they have fallen and have head injuries from substance abuse. TBIs are clearly a risk factor for poor prognosis in health care,” said Oslin.

In his experience at the VA, TBIs, even mild in severity, are risk factors for developing mental health challenges later in life. For example, Oslin cites noted research showing that people are more prone to develop post-traumatic stress disorder if they have had a TBI, even a mild case. According to Oslin, symptoms become apparent and exacerbated when left untreated or mistreated.

Robinson’s research made similar findings. “The more obvious recovery happens within the first year [after the trauma]. But there’s not a lot of data after year one. We see now that other problems can develop–the interaction of sensory challenges with your life’s demands play a role too,” Robinson said. His patients tend to be younger, in school or employed, raising a family, and managing relationships. As the demands of everyday life rise, the lingering symptoms of MTBI can become more exposed.

Long-term studies of patients with TBI are costly–often cost-prohibitive for hospitals and research centers. Instead, Robinson hopes the DoD committee will look into the relationship between TBI and the development of dementia.

“If we’re committed to lifetime care,” Robinson said, “and our older population from the Vietnam era have had TBIs, we need to understand better the relationship between TBIs and Alzheimer’s, Parkinson’s, and other neurodegenerative processes.”

When veterans access VA care, they complete a questionnaire that includes questions about past head trauma. Once a veteran is in the VA system of health care, the staff and technical software work together to create a list of patients who may be at high risk for mental illness or suicide.

“We take this list and outreach to them. We check-in, let them know we’ve identified them as high-risk factors, and see if there is anything we can do to help,” Oslin said.

The VA understands veterans have the option to choose private–civilian–health care. But both Oslin and Robinson are insistent that VA health care works better for veterans.

In 2005, after a rise in TBI patients from the Iraq and Afgan wars, the VA started a PolyTrauma System of Care to study the interaction between psychology and brain injuries. Robinson credits this system of care with today’s quality of treatment for TBI patients but admits there’s still more work to do.

For veterans struggling with mental illness or thoughts of suicide, please call the VA Crisis Line at 800-273-8255.

If you are a veteran in the Delaware Valley looking for VA care or need help determining your eligibility for VA care, please call (215) 823-4014.