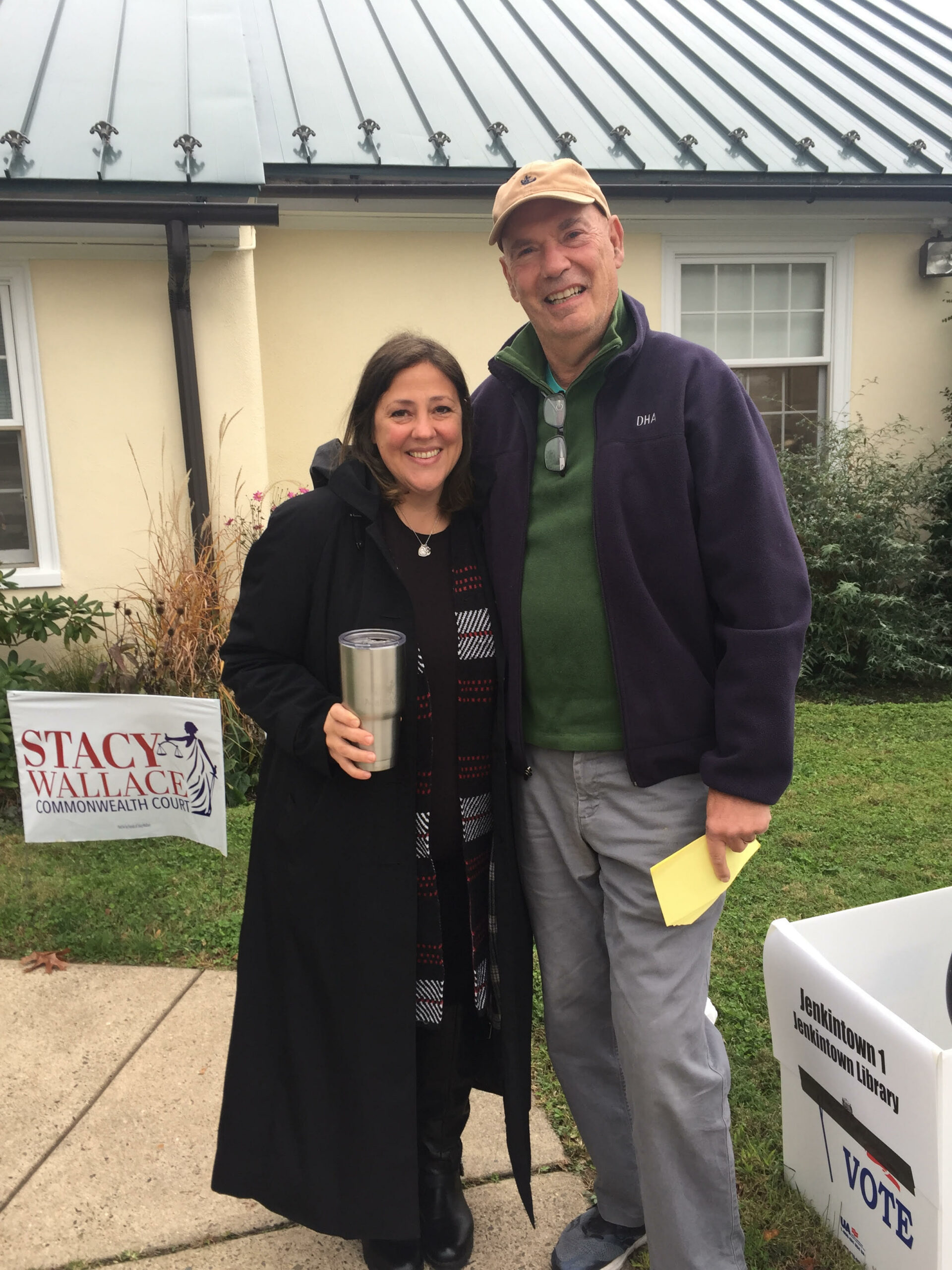 As rain threatened Tuesday morning, voter turnout in many places around the Delaware Valley was light.

Up for grabs are seats on school boards, various municipal and county offices, and judges, including an opening on the state Supreme Court where the candidates, Republican Kevin Brobson and Democrat Maria McLaughlin, have made some waves with negative television ads.

“I’m voting Republican this time because of the high school district taxes and hopefully something will be done about it,” said Brown, who usually supports Democrats. At 9:15 a.m., she was only the 23rd voter. The polls opened at 7 a.m. and close at 8 p.m.

Roy Hollinger, a GOP committeeman in Cheltenham, said turnout was sparse because “there are no overriding issues. You look on the TV and all the ads are about New Jersey. There was nothing to stir us up.”

Over in Abington, several voters said they always vote in every election.

Paul Morse, who is running for the school board, agreed that turnout was light. He previously served on the board from 1989 to 2000 but decided to run again because he does not like the direction the current board is taking the district.

Morse, who is one of the candidates who received the backing from the Back to School PAC, which poured more than $500,000 into school board races across the state on the issue of keeping kids in school, said masks and vaccine mandates are big issues with parents. He also opposes Critical Race Theory, a controversial Marxist-inspired doctrine taught in the schools and is also concerned about new apartments being built that he believes will bring many more children to Abington, causing fiscal issues. 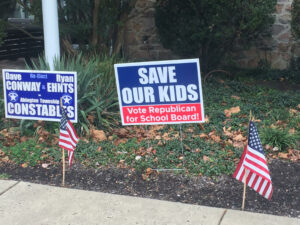 Campaign signs at the Abington Library.

“Art and music could be sacrificed,” he said. “The school board is not listening to the community or parents.”

Also, the Abington School District is now ranked lower both statewide and nationally under the current leadership, he said.

In Jenkintown, school board candidate Lisa Smith, a Democrat who cross-filed, was greeting voters. A social worker and the mother of four kids, the first-time candidate said she’s running “as a strong advocate” to support children and families. Dave Alexander, a Democrat who is running for constable, was handing out campaign literature.

“I believe in free and fair elections,” said Alexander.

At Sugartown Elementary School in Chester County’s Willistown Township resident Karl Hawkins said that he was concerned about the school board races. 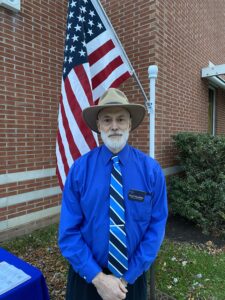 “It’s critical that there is a high turnout today, the most important office that’s on the ballot today is the school board,” said Hawkins. “Education has been a core issue around the country and in this area recently and I want to make sure that our voices are heard on this front. The off-year elections are always tough and we won’t know till about 10 pm tonight how our efforts turned out.”

Dee Miller, another Willistown resident said, “Local elections are very important because there’s nothing more important than where you live,” said Dee Miller. I’ll be paying close attention to the supervisor races because they set up the policies for the township, and in Willistown we have a very nice old-fashioned way of life. I think today will be a good turnout because a lot of people are focused on local issues right now, at the end of the day politics at the local level have a bigger impact on your life than the national level.”

Meanwhile in Bucks County, Roland Holroyd, 68, a Trump-supporting Republican who has lived in Bensalem for 45 years, said he was “absolutely horrified about what’s occurring on the national level.”

“I think we have to make great changes and ensure our kids are getting the proper education and not a lot of indoctrination,” said Holroyd, who voted Republican down the ticket. “We have to concentrate on making our children succeed in subject matter — mathematics, reading, mastery of the language, history being taught in a factual and fair way without any kind of external influence as to the judgment on the actions of people. It has to be in the context of the time in which it occurred. … There’s a lot of talk about Critical Race Theory. … I think it’s not the job of schools to fashion our society in one way or another.”

His wife was a teacher and he has a grandson who attends a private school because of the family’s concerns about the curriculum at public schools in Bensalem.

“I look around the country, and I see what’s happening with district attorneys almost invalidating laws,” he said, referring to a new measure passed by the Philadelphia City Council banning police officers from pulling over drivers for minor traffic violations. “We just can’t have a lawless county. We’re seeing the unequal application of the law when it comes to the summer riots of Black Lives Matter. And then we have people who are being held as political prisoners because of the Jan. 6 protests in Washington.”

“We at a point where people are chosen not for their competence to do a job,” Holroyd said. “We have a cabinet that’s either based on sexual preference, or race or their appearance instead of the fact that they had any serious qualifications to do those positions. The direction we’re going in is not what we expected.” 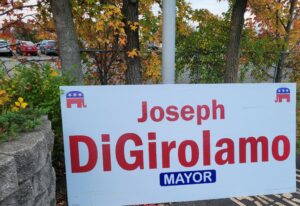 Bensalem resident Luana Gordon, 85, came out for the mayoral race between Democrat Val Ridge and Republican and longtime Mayor Joe DiGirolamo. She voted for “Joe D,” as he’s affectionately known.

“I like the consistency,” said Gordon, who grew up in Philadelphia and settled down in the township, where she’s lived for the last two decades. “I like the way things run here. It’s peaceful, it’s quiet. … I think today the youth have kind of lost their moral compass. It’s upsetting to me. In my day, nobody locked their doors. You could walk the streets at any hour and nobody got mugged or robbed. We helped each other. I don’t see that today.”

She said she felt Weintraub would keep Bucks County safe for her and her 7-year-old great-grandson, who accompanied her to the polls.

“We always try to make things for the next generation. It got to a point where instead of being grateful for what we’re given, they expected it. It’s an entitlement issue,” she said. “Things will be turning around. The jails are full. Drugs are a big part of it. There’s a lot of unknowns… I just try to hang on to what I’ve got here and steer things in the right direction. I think anybody, Democrat or Republican, who runs for office is trying to do the best as they see it. We just look at the same thing and see it differently. My generation sees it one way, and somebody’s generation sees it another way.”

David Larson, 82, who has lived in Bensalem for 40 years, said he picked “the best person” regardless of party affiliation. He was old school and wouldn’t reveal the candidates he voted for, but acknowledged he didn’t like the last president. And that still influences how he votes today.

He said he was impressed by a couple of Republicans on the ticket who are effective leaders, but hinted that he went Democrat Antonetta Stancu for district attorney.

“Too many people in jail for things that really don’t matter,” Larson said.

And in Delaware County, Radnor resident Sara Pilling voted at Rosemont Plaza. She was voter number 80 at 10 a.m. but was uncertain how busy that was, noting that many people vote by mail these days.

“Why did I vote this election? First, and most important, it is my civic duty to vote,” said Pilling. “And, I am very concerned about this movement of conservative Republicans to take over school boards. It was vital to deny – in Radnor the Reimagine Radnor – them a win. I voted for three Dems and one Republican (David Falcone).”

Matt Marshall, another Radnor resident said, “I voted today for change on the Radnor Township School Board. The incumbent members of the RTSD School Board, and by extension the administration, are too partisan. They have not listened to the concerns of the Radnor taxpayers. We need a locally focused School Board as we emerge from the Covid-19 pandemic. Now is time for a change, so I voted for all the Reimagine Radnor candidates who will be more focused on the students, parents and alumni of the Radnor School District.”