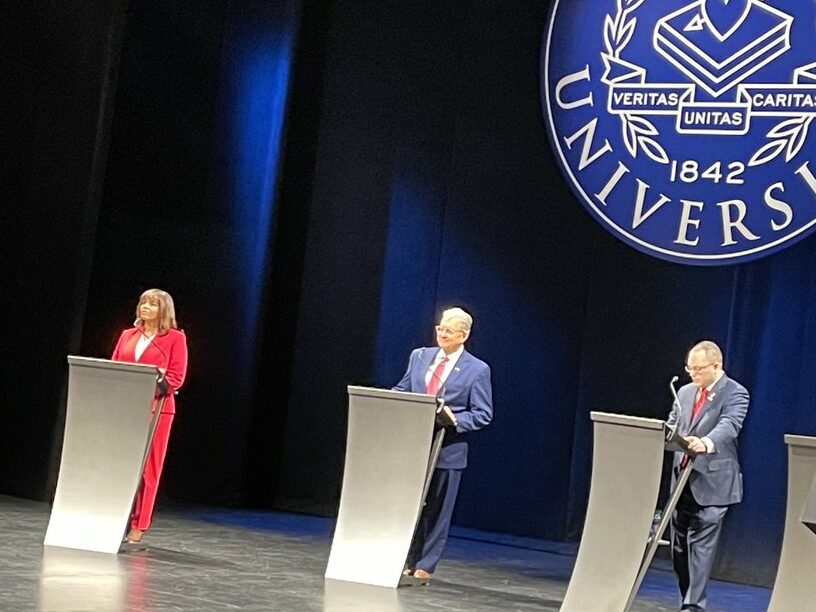 David McCormick, Carla Sands, and Dr. Mehmet Oz may have been gone during the Republican U.S. Senate debate Monday evening, but they were not forgotten.

The three candidates skipped the event, and their opponents called them out for it again and again.

“We have political tourists running in this race. Mehmet Oz and Dave McCormick do not know this state, they couldn’t be bothered to show up tonight and they don’t care about you,” said Montgomery County developer Jeff Bartos.

“I didn’t parachute into Pennsylvania to run for office,” said Bartos. “I’m a lifelong resident with a deep love for our commonwealth. You cannot save Main Street if you can’t find Main Street. And as we saw tonight, my out-of-state opponents don’t even care to try to find it.” 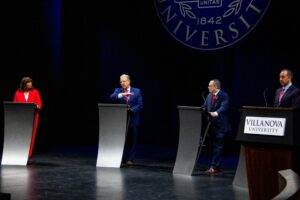 “Jeff has thrown out a lot of punches on Dave McCormick and Mehmet Oz, and it is warranted. It is such an insult that this is the second debate and they refuse to come before the American people, and specifically Pennsylvanians.”

On a different topic, Barnette said, “We need to focus on the economy and not just welfare checks or stimulus checks to keep people floating by.”

Along with cutting taxes and deregulating, “We need to begin to stabilize the U.S. dollar. That creates job growth and a rising tide lifts all boats,” she said.

“Students follow jobs,” said candidate George Bochetto, a Philadelphia lawyer. “And in order to keep students in this area, we need to provide good jobs, attract good jobs, provide the environment that businesses want to invest in. Right now the current leadership we have in Pittsburgh and Philadelphia, with Democrat-run cities that are chasing away our businesses, the students will (go) away with them. So if we want these students here, we have to get them the best jobs imaginable and we have to invest in our communities and our businesses that will provide those jobs.”

And then there was relatively unknown candidate Everett Stern, who attacked his fellow Republicans — particularly Barnette — for supporting former President Donald Trump. He said Barnette should personally apologize for the January 6 riot at the U.S. Capitol.

The audience booed Stern, an investigator and Chester County resident. 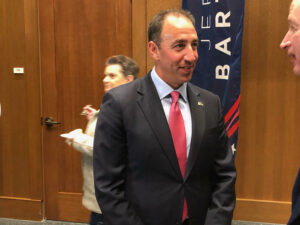 “My mission is to absolutely make sure that a right-wing candidate backed by either Trump or Gen. [Michael] Flynn, does not get into office. And that means if I have to take down any of these candidates, to make sure I bring the moderates with me and a Democrat wins, so be it,” Stern said.

A hot topic for the Republicans on stage was inflation hitting gas prices and grocery store shelves.

Bochetto said inflation does not hurt rich people or those who are not paying taxes but takes a toll on the middle and working classes.

“But the handling of the COVID pandemic, the giveaways and the printing of money that has taken place, that is the terrible policy President Biden implemented on day one when he took office, which was to close down our development of natural gas in the United States of America…to force this country to start begging OPEC for oil and oil supplies, and they’re driving up the prices,” Bochetto said.  “And what’s driving up inflation? Go to the gas station. Fill your car up. See how much more it takes. That’s what’s driving inflation.”

Bartos said that during the pandemic he started a nonprofit and raised $3.5 million to help small businesses after he saw people “being crushed by a government that did not care.” 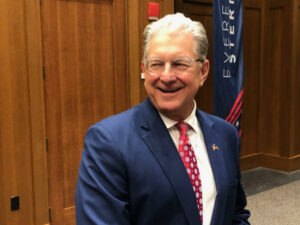 “Then Biden administration comes in and put in policies that raise inflation…that have crushed, crushed the restaurants and small businesses that already operate on a razor-thin margin. We need to go back to the policies that were working just two short years ago,” said Bartos.

Asked about the state’s energy sector, Bartos said he would be a senator who “fights for Pennsylvania’s energy industry.”

“What we’re seeing today in Ukraine and Russia is the direct result of the Biden administration’s terribly flawed, failed policies from day one to enable Russia to finish the Nord Stream pipeline that will allow Putin to ship his natural gas and resources to Germany. Tomorrow, Pennsylvania gas should be on LNG tankers on its way to ship to Europe to help America’s allies. We need to shut off all pipelines and all energy transfers outside of Russian borders and we should cut Russia off. And we should put Putin right back where he belongs, which is in his a country, a gas station with an army.”

Barnette would write legislation to remove the Biden administration’s restrictions on drilling and to reopen the Keystone pipeline. Having a strong domestic oil and gas production “allows us to remain strong and put a check on bullies all across the world,” she said. 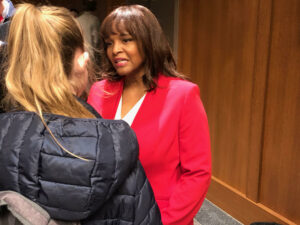 Kathy Barnette talks to students after the debate.

“There’s no question we’re sitting on a Saudi Arabia of natural gas, Marcellus Shale,” said Bochetto. “Developing that and fracking is key…But what really has to happen to turn it around is to invest…get it to Philadelphia, get it to New Jersey, get it to the coastline where we can then export. And the only one meaningful way to get it there and that’s through pipelines.”

Broad and Liberty, the Pennsylvania Chamber of Business and Industry, the Keystone Free Enterprise Fund and GOP SuperPAC LV Strong sponsored the debate.