POWELL: Did America Transform When We Were Busy Doing Something Else? 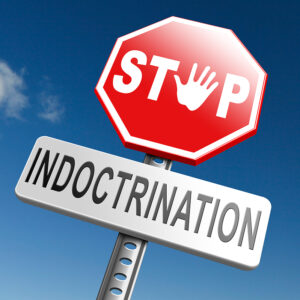 America has always had a debate on the separation of church and state. In recent years a new separation debate has formed, pitting public institutions against parental rights.

Perhaps the debate was first framed in 1996 when first lady Hillary Rodham Clinton’s book “It Takes a Village” was published. The Dallas Morning News described the book as “a textbook for caring.” An excerpt from Simon & Shuster reads, “Children are not rugged individualists. They depend on the adults they know and on thousands more who make decisions every day that affect their well-being.”

In 2021, the parental rights issue exploded onto the national scene in Virginia when Democratic gubernatorial candidate Terry McAuliffe answered a question posed by his Republican opponent, Glenn Youngkin.

McAuliffe, a former governor, said, “I’m not going to let parents come into schools and actually take books out and make their own decisions,” adding, “I don’t think parents should be telling schools what they should teach.” The parental rights movement was launched.

Things got ugly fast as parents demanded answers and how race and gender were being addressed in the classroom. What was discovered was schools were using materials aligned with the basic tenets of critical race theory. An article in Education Week defined it this way, “The core idea is that race is a social construct, and that racism is not merely the product of individual bias or prejudice but also something embedded in legal systems and policies.”

The Biden administration was all-in with its whole-of-government equity agenda.   In a stunning move, in response to parent protests at school board meetings, Attorney General Merrick Garland seemed to imply that protesters were domestic terrorists. Texas Attorney General Ken Paxton, a Republican, wrote, “The Biden administration cannot silence parents for exercising their constitutional rights and treat them like terrorists simply for having concerns about what their children are being taught.”

The point is that by the time parental concerns focused and grew, an entire issue infrastructure had grown around the racial equity movement and metastasized throughout the culture.

The academic community was creating materials for classroom use. The College of William & Mary School of Education posted “What is Critical Race Theory? Resources for Educators” on its website. Rutgers University published, “Understanding Critical Race Theory and How to Incorporate its Principles in the Classroom.” Portland (Ore.) Community College posted “Critical Race Theory Tool Kit.” The Equity Institute had a complete pedagogy ready to download, including “Building Equity in Your Teaching Practice.”

The point being progressive, WOKE culture already controlled the language and messaging of the issue flying under the banner of “diversity, equity and inclusion.”

Medical schools were not immune. Stanley Goldfarb, a retired nephrology professor at the University of Pennsylvania, worries that we are sacrificing quality in the name of diversity.  He points to the AMA’s three-year strategic plan that conflates racial justice with health equity, changing assessment criteria for first-year medical students to pass/fail, and more medical schools scraping the Medical College Admissions Test.

Goldfarb has started a nonprofit group called Do No Harm and has written a book, “Take Two Aspirin and Call Me by My Pronouns,” which was favorably reviewed in the Wall Street Journal.

The corporate world is far down the path of adopting diversity, equity and inclusion policies. Forbes Magazine wrote that diversity, equity and inclusion have become a “mainstream buzzword in the corporate world.” It cites the rationale as “micro-aggressions, discrimination and violence is experienced on an ongoing basis, the need for a safe place to create, contribute, and thrive is vital.”

Marketplace reported in November 2022, “Diversity and inclusion manager has been the second-fastest-growing job title over the past five years, right behind vaccine specialist, according to LinkedIn.”

American parents assumed that the curriculum issues could be solved at the ballot box. They were wrong because equity policies are being integrated into our institutions and changing our culture.

On Oct. 31, 2008, then-senator Barack Obama proclaimed, “We are five days away from fundamentally transforming the United States of America.” As John Lennon said, “Life is what happens to you while you’re busy making other plans.”

Our culture may have shifted without half the population knowing it.