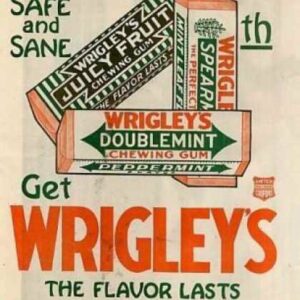 There’s no Chewing Gum Hall of Fame. However, you can visit the next best thing: Joanne’s Gum Museum, in a little building in Quartzsite, Ariz., featuring a collection of 4,000 pieces amassed since the 1940s.

Americans chomp down on nearly 195 million pounds of the stuff every year without knowing its sticky secret.

Humans have always looked for something to chaw on. Our ancestors chewed everything from tree resin lumps to sweet grasses. Ancient Greeks chewed mastiche, ancient Mayans chewed sap of the Sapodilla tree, and Native Americans enjoyed chewing coagulated tree sap (and, like us, probably growled expletives while scraping it off their moccasins after stepping on it).

In the 1800s, an enterprising Yankee took chewing gum to the next level. John Bacon Curtis cooked up some spruce gum sap over his kitchen stove in Bangor, Maine. “State of Maine Pure Spruce Gum” hit the market in 1848. The reaction? “Ah yup, it’s a pissah!” (It’s a Maine thing. Translation: “I like it.”)

Curtis eventually engaged his brother (some sources say it was his father, others say it was both the brother and the father) in the family business. They cooked the gum while he sold it around New England. He eventually offered a rainbow of gum varieties: American Flag, Yankee Spruce, White Mountain, Licorice Lulu, Trunk Spruce, Four-in-Hand, Biggest and Best, and 200 Lump Spruce. Imagine running into your local convenience store and saying, “A pack of 200 Lump Spruce, please.”

In 1850, Curtis switched to a version somewhat like paraffin wax. Customers liked it better. A whole lot better, in fact, because his company eventually occupied a three-story factory, where 200 employees turned out 1,800 boxes of chewing gum every day.

But there was a problem. John B. Curtis was a typical contrary Yankee and never took out a patent. He preferred keeping his material and gum-making equipment secret. Which created a big controversy among historians: Who first patented chewing gum?

Those who believe in hardcore accuracy point out Amos Tyler got one on July 27, 1869. But he never did anything with it.

While all that was going on, a photographer-turned-secretary-turned-inventor/scientist had a devil of a problem on his hands.

Thomas Adams was personal secretary to deposed Mexican dictator Generalissimo Santa Anna. The same Santa Anna who was the bad guy in the Alamo story. He was living in exile on Staten Island, N.Y., and he had a crazy idea. Santa Anna wanted to import chicle, a gummy sap from a Mexican tree, and sell it as a cheap substitute for rubber. His enthusiasm was contagious, prompting Thomas Adams to buy a ton of the stuff.

Adams made chicle toys, chicle buggy tires, even chicle rain boots. None of them sold. The ex-dictator lost a bunch of money and the two parted company, leaving Adams with all that raw chicle on his hands. He grew frustrated and his chicle supply seemed destined to wind up dumped in the East River. Then one day, serendipity struck.

Adams was in a drug store when a young girl bought a piece of paraffin wax chewing gum for a penny. He remembered something; while tinkering around in the laboratory, Santa Anna would often pop a piece of chicle in his mouth and chew it.

Adams rushed back to his lab and started over from scratch. He boiled some chicle and gave it a test chew. It was a vast improvement over the paraffin version (more elastic and longer lasting). He called his concoction Chiclets, and in February 1871 Adams New York Chewing Gum hit the market.

Chewing gum as we know it had finally arrived. The late 1800s were boom times for gum makers. When they found they could add flavor to the stuff, business exploded.

In 1891, a company opened in Chicago that produced baking soda. Sales were flat, so in 1892 the owner tried a promotion gimmick: He cooked some gum and attached one stick to each can of soda. Cans started flying off store shelves.

Knowing a good thing when he saw it, the business owner gave baking soda the boot to produce gum only. And he laughed all the way to the bank as a result. His name? William Wrigley.

Now for the secret promised earlier. Remember the pioneer awarded the first commercial chewing gum patent? It was only a sideline for him because he had a day job.

William Finely Semple was … a dentist. That’s right; the man who promoted putting gum in mouths belonged to the profession that filled dental cavities created by it.

Talk about working both sides of the street!