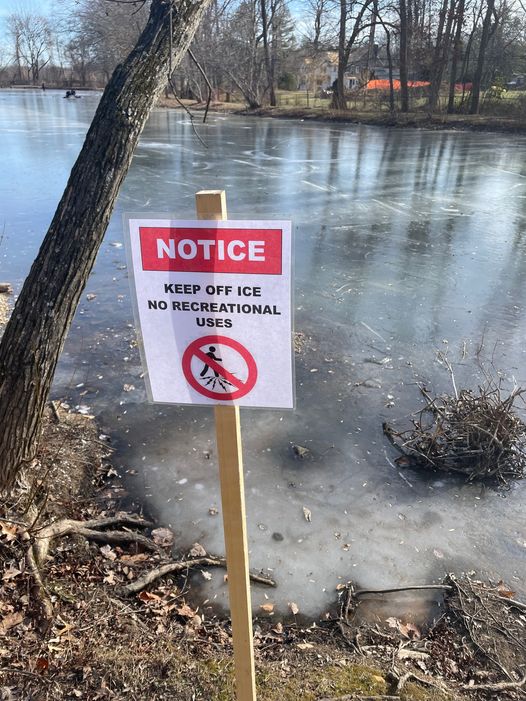 The Radnor Board of Commissioners lifted a ban on skating at The Willows and Fenimore Parks in Radnor Township following objections from community members.

At a BOC meeting last week, Bill White, township manager, laid out the reasoning behind the pond’s closure earlier that week.

He cited safety concerns and a few instances in which children had fallen through the ice. He also mentioned a third incident in which a hole in the ice was spotted near an unmanned sled and prompted a concerned passerby to call the police. In that case, however, no child had actually fallen through the ice. White clarified that while no children were seriously injured in any of the incidents, the risks posed were still great enough to cause the board to review the ordinances and subsequently issue closures.

White apologized for the lack of communication prior to the ban being instituted and acknowledged the burden it would place on the community. He added township ordinances had never technically allowed skating on the ponds.

Local residents, many of whom had been skating there for decades, were frustrated. They said a “skate at your own risk” sign was the simple and obvious solution.

“This proposal to ban ice skating is nothing short of a display of cowardly leadership,” argued T.J. Doyle, a township resident, in reference to the sudden ban.

“My wife can’t be here tonight. She’s a child-psychologist. She can’t handle her case-load right now, because there’s so many young people who can’t understand what has just happened over the last two years and now we’re not going to let them outside, to play in fresh air and skate on a pond? Makes no sense,” said resident Matthew Marshall, a former Ward 1 interim commissioner and longtime Radnor resident.

To many residents in neighboring communities as well, the ponds are local attractions. A few citizens attended the meeting to voice their objections to the ponds’ closure. For many, the ponds are a focal point of the area’s long-standing ice skating tradition. Residents described that as far back as they could remember, during the winter’s coldest weeks the parks would transform into frozen wonderlands teeming with parents, coaches, athletes, and children.

Twelve-year-old Owen Doyle, who lives in Fenimore Park and grew up skating there, offered what was perhaps the evening’s most compelling argument. He recalled the many years he had spent on the ice and his first memories of it. He explained those memories had gone as far as shaping who he was as a person. He mentioned, “One of my [most formative] memories is having my dad carry a chair over to the pond so that I had something to prop me up while I learned how to ice skate.”

“Please don’t take this away from us,” Doyle said in conclusion.

No community members spoke in support of the ban.

After a long series of objections, commissioners decided to reinstate the “skate at your own risk” sign.

“With the sense of the board being what it is, perhaps we could return to ‘skate at your own risk’ while we work on the various legislative or procedural improvements that may be needed to ensure greater safety,” White said.

The “skate at your own risk” sign was scheduled to be put back up on Tuesday.

“We won a minor moral victory last night, but will continue to work with the Radnor Board of Commissioners to enact legislation to keep ice skating freely permitted on the Fenimore and Willows ponds,” Marshall said on Facebook afterward.

“It has been a privilege and tradition to ice skate on these ponds for many generations of Radnor residents. Thanks to everyone who participated in public comments. Please skate at your own risk and watch out for your children’s safety. Common sense makes a comeback!”