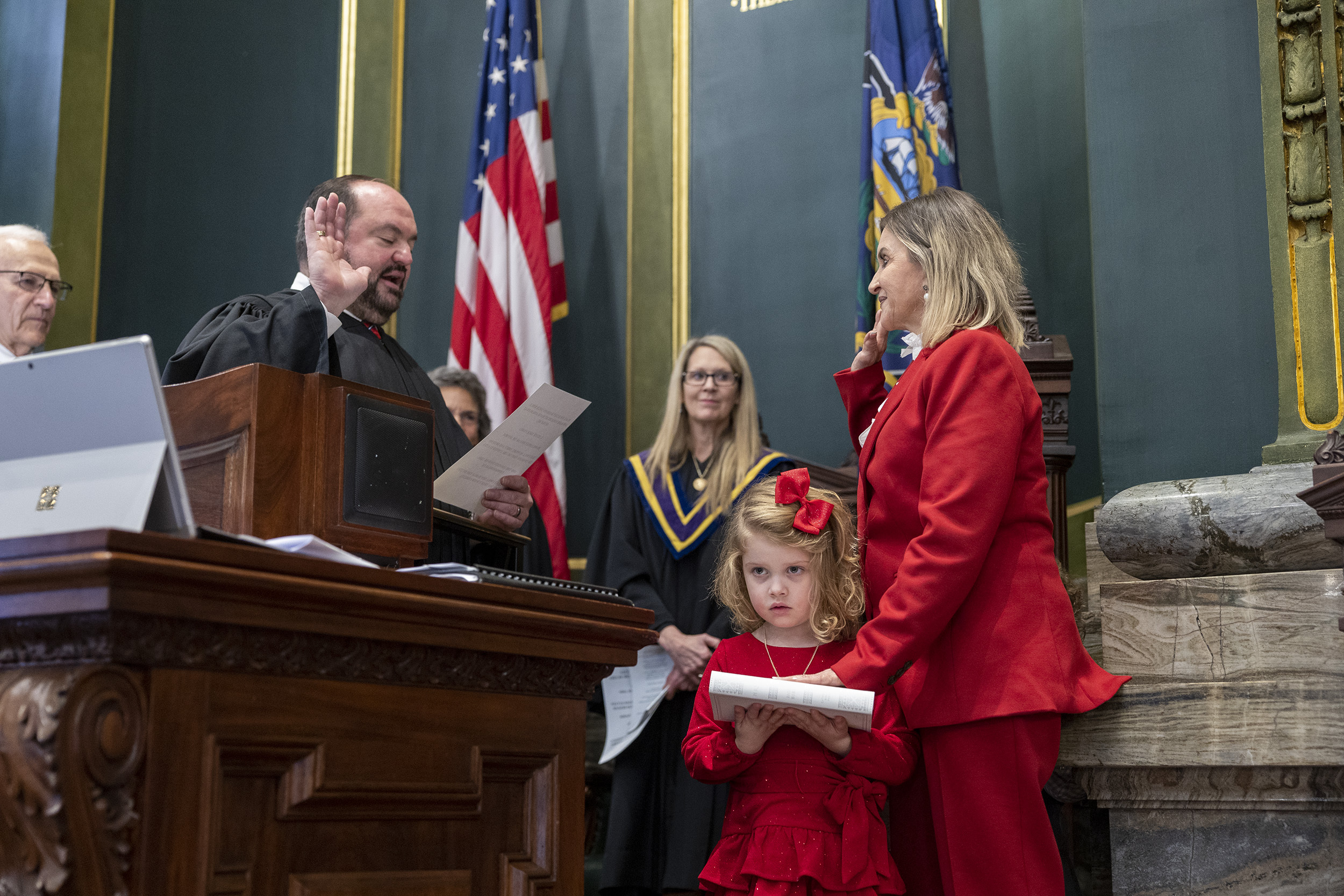 Sen. Kim Ward was elected by her colleagues on Tuesday as the first woman Senate President pro tempore, or leader of the Pennsylvania Senate.

She will also serve as lieutenant governor until Democrat Rep. Austin Davis is inaugurated on Jan. 17. (Davis resigned from the House last month to prepare for his new position.)

Ward (R-Westmoreland) noted in her remarks to senators that more women are now serving in the Senate than ever before, eight Republicans and eight Democrats. While the House is nearly evenly divided, with Democrats likely to take control after three special elections to fill vacancies are held, the Senate retains a Republican majority.

Asked what she believes the legislature can accomplish with a Democratic governor and House, Ward told the Delaware Valley Journal that bills that are “good for the people of Pennsylvania” will be passed.

Her number one priority is a constitutional amendment requiring voter identification.

“That’s probably the most important thing we want to get done,” she said. Polling shows most Pennsylvanians, regardless of party, agree that voters should show their ID to vote.

Asked what she can do to stop the state’s continued population loss (about 40,000 people from July 2021 to July 2022), she said the newly decreased corporate income tax should help.

“I think it’s important in that it is businesses bring jobs, right?” said Ward. The legislature passed “a big package. It’s going to help everybody in Pennsylvania.”

She also wants to unleash the energy sector and promote Marcellus Shale gas.

“We should choose to use the vast natural resources that we’re sitting upon,” she said. “And we don’t need to be pounding negatively on other energies and other energy sources do not need to pound negatively on fossil fuels.”

Using that natural gas will bring more jobs and more people to the state, she said.

And she’s hopeful that Shapiro will keep to his campaign commitment to take Pennsylvania out of the Regional Greenhouse Gas Initiative (RGGI) that Gov. Tom Wolf entered despite legislative denials.

She asked why Pennsylvania should be “negatively impacted” by RGGI, which will increase electricity costs, because “New York and these other northeastern states don’t have what we have (natural gas).”

The DVJournal wondered whether Republicans in Harrisburg and the rest of the state think the Delaware Valley is now hopelessly Democratic.

Asked her advice for other women who aspire to leadership positions, Ward was straightforward.

“Stay focused. Keep your eyes on where you’re to be. Work hard as you can and don’t let anybody tell you, you can’t do something because yes, you can.”

At her swearing-in ceremony, Ward said that in addition to reducing the corporate net income tax, they increased education spending and g, created the Pennsylvania Edge Tax Credit program to increase energy production. They also created a childcare tax credit, a home repair program, and a health care prior authorization change to help people access needed procedures. And these improvements were done in a bipartisan way.

“As we look forward, I’m hopeful that we can, together, put Pennsylvania on a greater path to prosperity,” she said.  “By tapping into our state’s energy abundance, we can fuel our state’s economy, create, and maintain good family-sustaining jobs and create energy independence, not only for our commonwealth but for our nation.”

Ward also wants to promote “earlier detection of breast cancer and greater access to a BRCA gene test for women.” 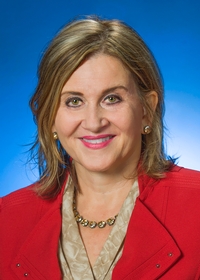 Senate Republicans Tuesday elected Sen. Kim Ward to serve as president pro tempore. She is the first woman to serve in that position, which is the third highest office in the state. It was among the Senate Republican leadership positions for the 2023-24 legislative session chosen on Wednesday.

“We think this is going to be pretty challenging in the next year or two,” said Ward (R-Westmoreland) at a Harrisburg press conference afterward. “The landscape has changed a little bit. We’re not sure really what’s happening in the House. That’s still up in the air. We have a new governor. All I know is this: We need to be the best we can to serve the people of our commonwealth.”

Ward had previously served as the Senate Majority Leader.

“I am incredibly proud to elect Kim as the first female pro tem. Her leadership and experience will be critical as we potentially lose the majority in the house. I am looking forward to working with Kim and the rest of the Senate leadership team,” Rep. Tracy Penncuick (R-Harleysville), who was just elected to the Senate 24th District, to serve parts of Montgomery and Bucks Counties.

The president pro tempore is responsible for appointing the chairpersons and members of the 22 standing committees of the Senate and serves as an ex-officio member of all committees. She will preside over the Senate floor when the lieutenant governor is unavailable and fills the position of lieutenant governor if the office becomes vacant. The office also refers bills and resolutions to the appropriate Senate committees for consideration.

“To all members of the Senate, Democrat and Republican, I look forward to working with you to chart a path forward that requires us to selflessly work together advocating for all Pennsylvanians and their families by putting the principles and respect for this institution and our Commonwealth above all,” Ward said. “Together we have done big things for Pennsylvania, and they should be acknowledged in the bipartisan manner in which they were achieved. It is proof we can be diverse and unified at the same time and a kind reminder of the work we must continue to do on behalf of our commonwealth and its citizens.”

The Senate Republicans also elected Sen. Joe Pittman (R-Armstrong) as Senate Majority Leader. His duties include overseeing the legislative agenda, developing policies and strategies for the Senate Republican Caucus, and playing a key role in floor debates officials said. He also has a major role in negotiating issues with the administration and House of Representatives and in coordinating action on the Senate floor. Pittman previously chaired the Senate Urban Affairs and Housing Committee.

“To serve as the majority leader of the Senate Republican Caucus in the upcoming session will be a great honor,” Pittman said. “I am flattered to have the support of my colleagues and am committed to advancing a positive, pro-growth agenda for the citizens of this entire Commonwealth. The constituents of the 41st Senatorial District who have elected me to represent them as their senator will always be my top priority and focus, and I will use my voice to represent them and their interests.”

Also, Sen. Kristin Phillips-Hill (R-York) will serve as Majority Caucus chair for the 2023-24 legislative session. The chair presides over Republican caucus meetings to discuss bills and amendments and to develop caucus strategy. And Sen. Camera Bartolotta (R-Beaver) was elected Senate Majority Caucus secretary to oversee all executive nominations submitted to the Senate for confirmation.

Ward was first elected in 2008. Previously, she had served as a Westmoreland County commissioner and was on the Hempfield Township Board of Supervisors, where she was chair.

Ward worked in a bipartisan way to address the COVID-19 pandemic.

She led efforts to ensure the people’s voice was not lost by advancing a constitutional amendment giving the people a say through the introduction of Senate Bill 2, which instituted the largest transfer of executive power since President Herbert Hoover, according to her online bio.

She’s also been active in regulatory reform and tax relief.

Ward advanced efforts to reduce the Corporate Net Income Tax (CNIT) for Pennsylvania, taking it from one of the highest in the nation to phasing it down to one of the most competitive rates among states. She also helped to provide more certainty for businesses through regulatory reform and make tax code adjustments for small- medium-sized businesses, her website said.

Ward is a member of Our Lady of Grace Catholic Church in Hempfield Township, the Italian Sons and Daughters of America, and the NRA. She is a southwestern Pennsylvania native who grew up in Meadowlands in Washington County. She attended The Community College of Allegheny County Respiratory Therapy program, the University of Pittsburgh, and Middle Tennessee State University.

She and her husband, Dr. Thomas Ward, have three sons: Tom, Michael, and Matthew, and six grandchildren.