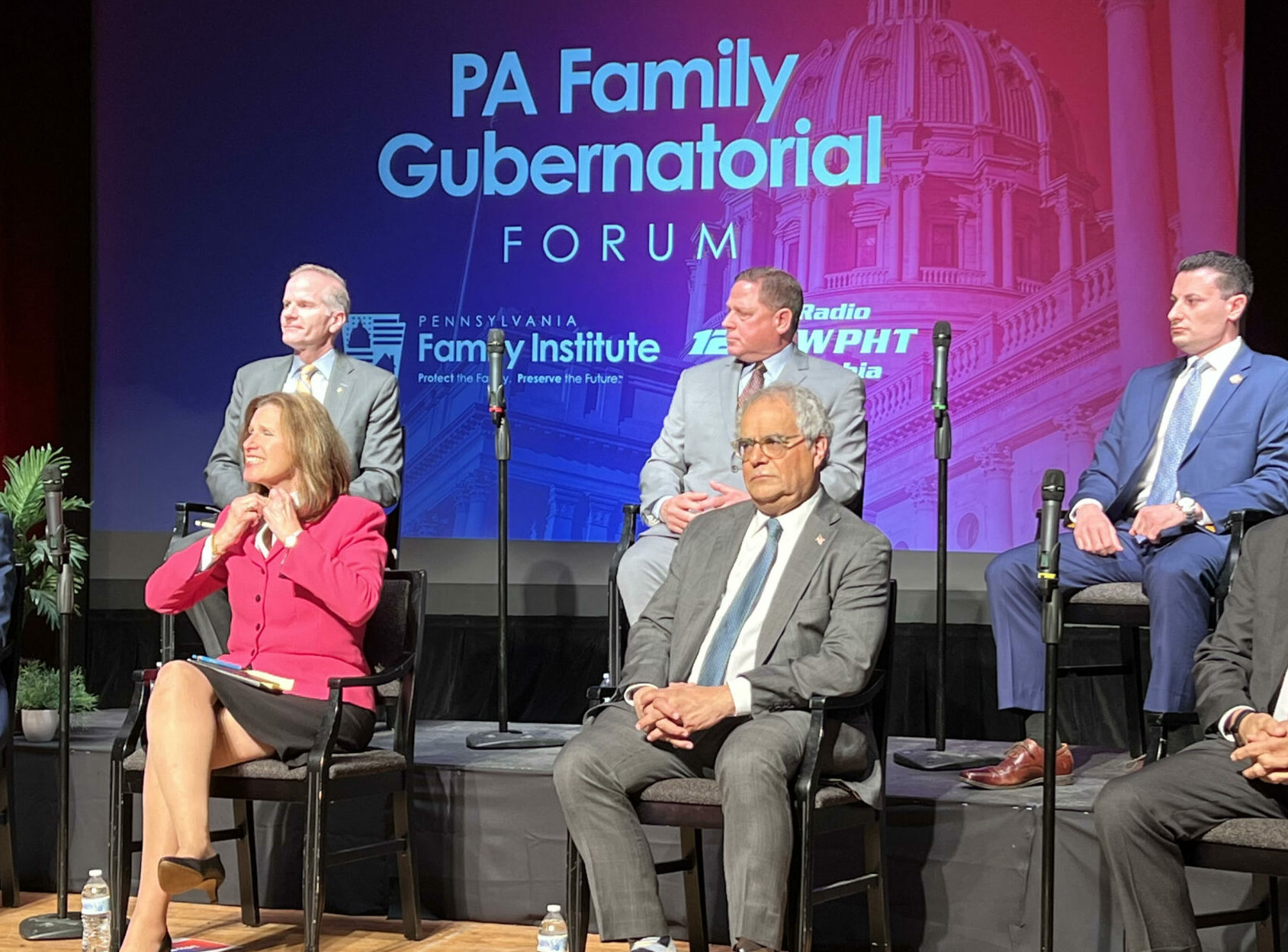 Several hundred people attended the event sponsored by the Pennsylvania Family Institute. Thousands more listened on 1210 WPHT as seven of the nine GOP candidates for governor debated the issues.

“I’m the ultimate package deal,” said Dr. Nche Zama, a cardiothoracic surgeon who emigrated from Cameroon as a teenager. “I’m a heart surgeon. When you grab the scalpel, you only have one chance to do it right. You espouse excellence, discipline. I’m results-oriented.” 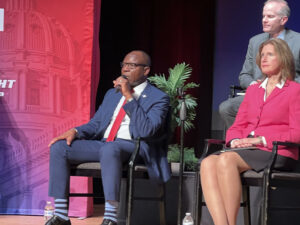 Former Congresswoman Melissa Hart noted she is the only candidate from western Pennsylvania, while Shapiro is a Montgomery County resident. Before running for Congress, she was a state senator and won in Democratic majority districts in every election. For the last 15 years, she has practiced law in the private sector.

“Something Josh Shapiro isn’t quite familiar with, working in the private sector, because he jumps from office to office and he expects you to continue to pay him his salary…We all know he’s going to run for president if he wins the governor’s race,” Hart said.

Political consultant Charlie Gerow said he is “the exact opposite” of Shapiro. 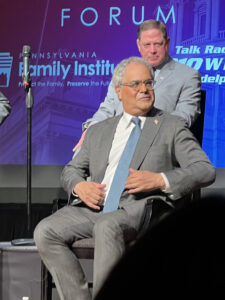 “I’m not a career politician who has been taking taxpayer paychecks for decades to run for other offices. I’m committed to conservative values and principles. I began my career with Ronald Reagan. I’m currently the vice-chair for CPAC…And I can take (Shapiro) on in those three nights in October when he will be required to face whoever the Republican is on a debate stage.

“I’ve debated him, and I’ve beaten him. And I can do it again. And that’s where the rubber will meet the road.”

Former congressman and Hazleton mayor Lou Barletta said, “I have a record of beating Democrats.” He was elected mayor three times despite a 2-1 Democrat majority, the third time with 90 percent of the vote, he said.

“Politics is about match-ups, and I think I match up well against Josh Shapiro,” said former U.S. Attorney Bill McSwain. “I am a conservative. He’s a liberal. I am a political outsider, I’ve never run for office before, and he is a career politician. I like freedom. He likes mandates and government control. I’m a real prosecutor… He’s a fake prosecutor who never actually prosecuted a case in his life, even though he’s the attorney general. I am a United States Marine, and he’s not.”

“I defended the 10 Commandments (on a plaque on the Chester County courthouse)…What does Josh Shapiro do? He sues the Little Sisters of the Poor,” added McSwain. 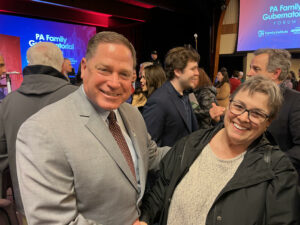 Dave White, a Delaware County businessman and former county councilman, said, “I am a unique candidate. I don’t want to match up with Josh Shapiro. I want to be the exact opposite. We need to give Pennsylvania residents a reason to come out and vote for us. We need someone that’s like them, that has their values. Someone that has a story behind their name. Someone like a pipefitter…that came out of vo-tech and grew an $86 million business. Someone who is not afraid to take on Josh Shapiro…I am a private business owner, an outsider.”

Montgomery County Commissioner Joe Gale attacked the two candidates who did not come to the forum, state Sen. Doug Mastriano (R-Franklin) and Senate President Pro Tempore Jake Corman (R-Centre), who Gale called “Jake the Snake.” Both legislators voted for Act 77 that allowed 50 days of no excuse mail-in ballots and so should be “disqualified from holding any office, let alone being promoted to a higher office.” Gale touted his willingness to criticize fellow Republicans and added, “I have a groundswell of support in southeastern Pennsylvania…and come from (Shapiro’s) home turf.”

Radio personality Rich Zeoli, one of the moderators, said his listeners are concerned about election integrity and asked the candidates what they would do to fix it. They all promised to repeal Act 77.

Barletta, White, Zama, Gale, and McSwain called for mandatory voter ID rules. Gale blamed the Republican majority legislature for passing Act 77, saying they “colluded with Gov. Wolf” and noted that Act 77 is “the reason why Donald Trump is not president today.” 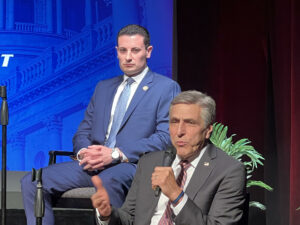 “We know dead people have been voting in Pennsylvania all of our lives. Now they don’t have to leave the cemetery to vote. They can mail in their ballots,” Barletta quipped.

McSwain highlighted his experience prosecuting voter fraud. His office prosecuted a judge of elections in South Philadelphia who was part of a “large conspiracy” called “ringing up votes” by going into voting booths when no one was around and pressing buttons as fast as he could.

“I stopped the riots in the summer of 2020 by charging everyone we could identify who torched a police car or blew up an ATM,” said McSwain. “I stopped heroin injection sites from invading neighborhoods in Pennsylvania.”

“I wish I had some more time because I think I’d cede some of it back to Mr. McSwain to tell us how he stopped those riots. Because I believe there are a lot of Philadelphia police officers and state troopers who might have a very different view because they are the real heroes,” Gerow said.

“This race, folks, is not about who is going to be the best prosecutor,” he added. “Frankly, every person in this room would be a better prosecutor than Josh Shapiro, and all of you have tried as many or more cases than he has, and the root causes (of crime) isn’t just joblessness. What’s needed are stronger families, like the Pennsylvania Family Institute advocates for,” he said.

White said he would bring a special prosecutor to Philadelphia to counter the damage being done by progressive District Attorney Larry Krasner.

“There is no way we should be putting up with 600 or 700 murders a year,” said White. He would also appoint special prosecutors for Pittsburgh, Scranton, and other crime-ridden cities. 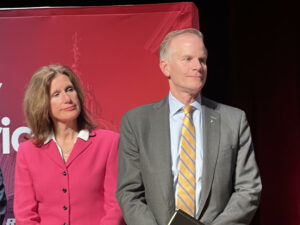 During the 2020 riots, Gale said he was the only elected official brave enough to speak out about Black Lives Matter, calling out “radical left-wing hate groups perpetrators of domestic terror” and endured protests at his house and celebrities calling for his ouster.

“I know what the men and women who protect us, what they do,” said Barletta. “Every day they come to work, they have no idea if they are going home,” he said, mentioning the two state troopers who were recently killed by a drunk driver on I-95. “Gov. Wolf walked in a parade with Black Lives Matter while people held banners that Blue Lives Murder. I will stand with our police and not only give them the funding they need but the respect they deserve.”

Zama said the others’ are offering old ideas that have not worked. He would begin “citizen councils” in high crime areas and “engage religious leaders” to address the root causes of crime, such as education and jobs.

“And begin to allow children to espouse excellence in their lives,” said Zama. “On the scale of desirable goals, excellence trumps diversity any day.”