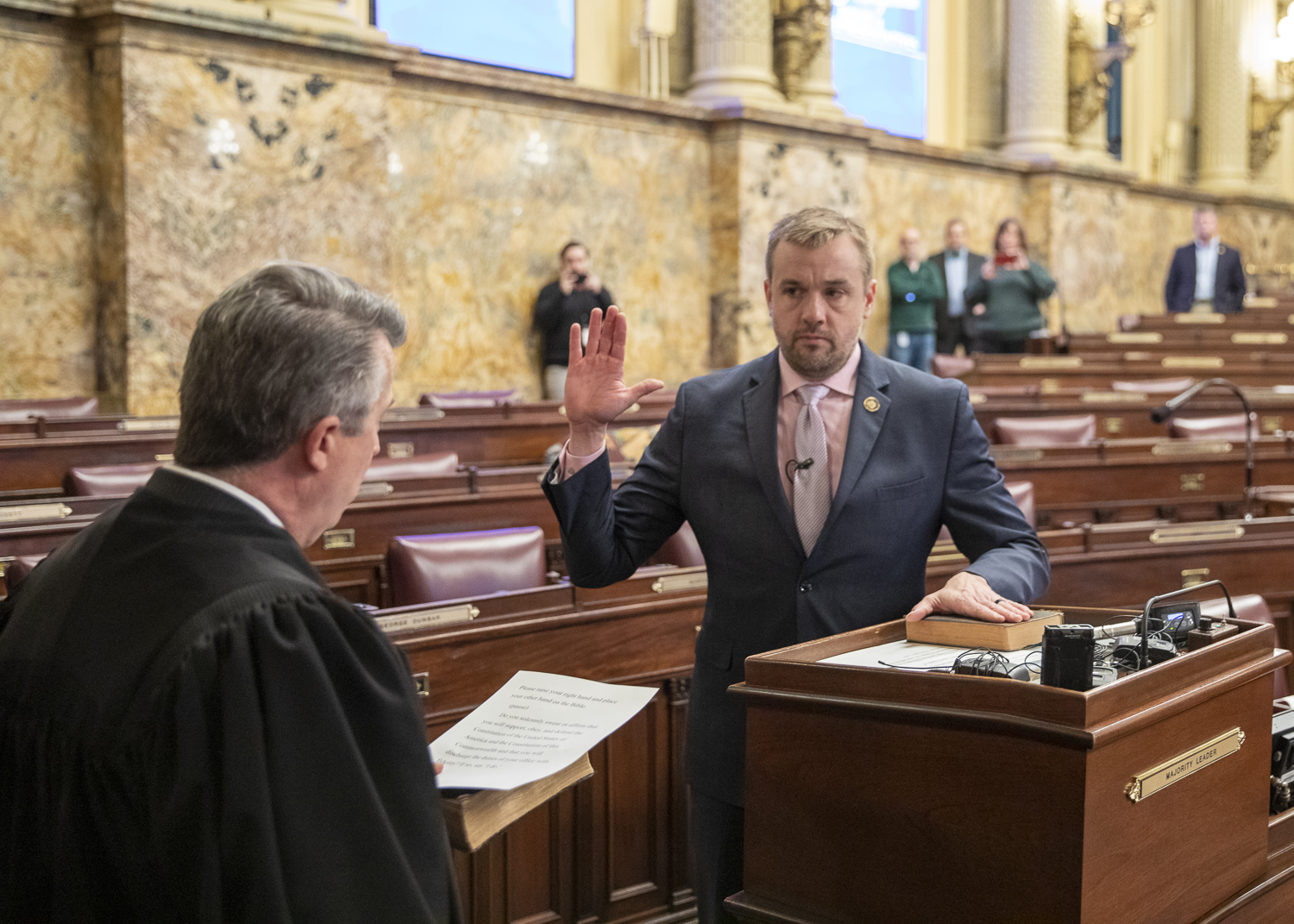 The Pennsylvania Republican and Democratic leaders in the state House of Representatives are at odds over which party is in charge. And it may fall to the judiciary to decide.

Due to vacancies in three Democrat-leaning districts, the House now stands at 99 Democrats to 101 Republicans.

But that did not stop Rep. Joanna McClinton (D-Delaware/Philadelphia) from having herself sworn in as House Majority Leader last Wednesday. She also set Feb. 7 as the date for special elections to fill the three vacancies.

On Friday, Cutler state Rep. Bryan Cutler (R-Lancaster) filed a lawsuit in Commonwealth Court asking for an injunction to prevent those elections. He followed up on Monday by holding a public swearing-in ceremony for his House seat and declaring himself the Majority Leader.

“He is the Republican Leader. Republicans have the majority. That makes him Majority Leader,” said spokesman Jason Gottesman.

“Last week, Rep. Joanna McClinton and the House Democratic Caucus conducted an unprecedented, illegitimate, and illegal power grab by claiming they have a majority in the Pennsylvania House after one of their members passed away and their quest for political power forced two more of their members to resign, dropping their total of members eligible to take office down to 99,” Cutler said.

“Their secret stunt showed the leaders of the Pennsylvania House Democratic Caucus care more about redefining terms to justify their claims to power than they do about basic math, being held accountable to the law, and providing electoral certainty.”

Nicole Reigelman, a spokeswoman for the Democratic Caucus said, “There is only one reason for Rep. Cutler’s actions today and lawsuit filed late Friday afternoon – to delay and deny nearly 200,000 Pennsylvanians their basic right to representation.”

Democrats argue that once the vacancies are filled in the three heavily Democratic districts they will almost certainly have a majority.

“As Rep. Cutler said himself when choosing February 7 as the date to hold special elections, ‘It is a fundamental obligation of the House to bring about predictability and certainty in representation for Pennsylvanians.’ Attempting to delay these special elections passed that agreed upon day means prolonging the period in which Pennsylvanians are without representation so that Republican leaders can advance extremist policies in flagrant opposition to the message delivered by Pennsylvanians on Election Day.

“The state House needs to be restored to its full complement without needless delay and every Pennsylvanian must have representation as soon as possible, so the legislature can begin the work it was elected to do,” Reigelman added.

Muhlenberg College political science Professor Christopher Borick said, “Indeed, it’s quite a mess in our state House right now. In essence, both parties have legitimate claims right now in terms of majority standing. The Democrats won. 102 of the 203 seats in the midterms, and thus have a legitimate claim that the voters of the state placed them in the majority.

“However, the circumstances of the death of one of the candidates and resignations of candidates after the election leave Republicans in the majority of those currently in the House, Thus, both have fairly solid cases during this odd period. It seems likely once special elections take place that the Democrats will be the majority, so the fight may be over some very temporary benefits. But often in politics, the biggest fights are over the smallest of concerns,” Borick said.

Cutler is serving his eighth term in the Pennsylvania General Assembly. In June 2020, he was elected to serve as the 139th Speaker of the House, having previously served as Majority Leader. He was re-elected Speaker on January 5, 2021.

A lifelong resident of the Peach Bottom area, Cutler faced adversity as a high school student when both his parents were diagnosed with ALS (which eventually took both their lives) and he assumed the responsibility of caring for them and his younger sister.

He said he wanted to give back to the community and ran for office. He was elected to the House in 2006.

McClinton was first elected in 2015 to represent communities in west and southwest Philadelphia and Yeadon and Darby in Delaware County.

A lifelong resident of southwest Philadelphia and graduate of Grace Temple Christian Academy, she became active in her community while completing an internship with the radio station WDAS. Later, she studied political science and leadership in global understanding at La Salle University. After earning her degree, she enrolled at Villanova University School of Law, interning at Regional Housing Legal Services, the Philadelphia District Attorney’s Office and the Defender Association of Philadelphia, where she became assistant chief.