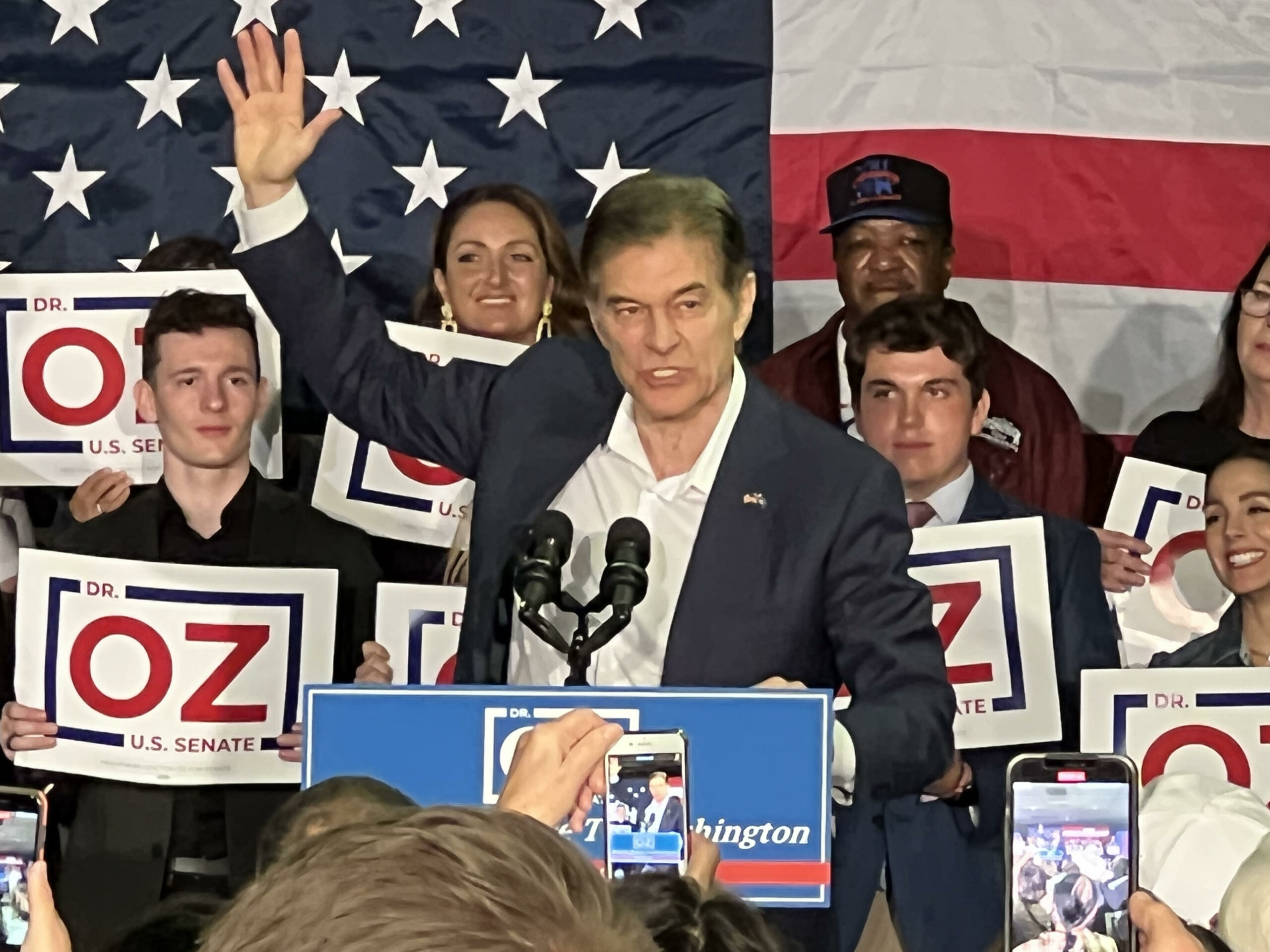 Dr. Mehmet Oz got a big boost from fellow Republican Rep. Brian Fitzpatrick during a rally at a fire station in Bensalem, one week before Election Day.

The first-time Senate campaign appears to have momentum in the polls in the final days, but political observers say for Oz to win, he must outperform fellow Republican state Sen. Doug Mastriano, the GOP gubernatorial candidate, in politically purple places like Bucks County. Fitzpatrick, a Republican representing a district Joe Biden carried in 2020, was on hand to introduce Oz to the crowd and make the case on issues like border security and fighting crime.

“We have people trying to get into this country the right way, the legal way, like so many did at Ellis Island,” Fitzpatrick said. “And everything is broken due to the choice of the far left.”

“Without any enforcement, there is no law,” he continued. “Our police officers across America are under assault. They’re having a hard time recruiting officers and keeping the ones they have. And this is what the far left wants, folks…If nobody does (police work) they advance chaos in the streets.”

Fitzpatrick also talked about national security and Biden’s inept withdrawal of forces from Afghanistan. “We all saw what transpired in Afghanistan. I have not had a pit in my stomach, since 9/11, the way that catastrophe occurred…We disrespected our American soldiers.

“And lastly, inflation. This is a big problem caused by politicians making poor decisions,” Fitzpatrick said.

Oz echoed the same issue set, urging the 250 or so supporters to talk to their friends and neighbors about those same issues: The economy, crime and the border. And then to make sure to get those folks to come out to vote next Tuesday.

Oz said when his father came to America from Turkey, “We were welcoming immigrants who would work hard to make themselves better and make our country better. And what he instilled in me is we are the land of opportunity. We are the land of plenty. The American dream lives on in me and you.”

But now, “people are struggling,” he said. “I’ve talked to seniors who don’t see their Social Security checks stretching far enough (because of) inflation. I’ve talked to young couples who can’t buy their starter house because the mortgage rates are too high now. These are self-inflicted problems. I’ve talked to families in every part of the commonwealth who fear what’s in their mailbox. They know their kids can literally order pain pills that could kill them.”

He mentioned a Chester County woman whose 32-year-old daughter died after receiving fentanyl-laced pills in the mail.

“That makes us a border state,” said Oz. “That fentanyl came across the border—an open border.” Drugs and human trafficking “have made these cartels a fortune.” 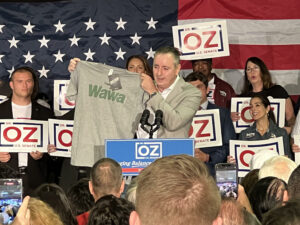 And Oz added people tell him “they don’t want to be part of a social experiment.”

Fetterman wants to “raise taxes on people already feeling pain from inflation. It’s easier to raise taxes when you’re not paying taxes of your own,” he said.

Oz noted the Fraternal Order of Police has endorsed him.

“They know I have their back and they are sick and tired of far-left political leaders not supporting them,” Oz said. When he was going to medical school in West Philadelphia, he could walk to his classes.  Now “it’s too dangerous.”

“Up in North Philly a pastor said it’s easier for him to buy fentanyl than baby formula,” said Oz. “Are you kidding me? The solution is to let people do their jobs.”

“Let the police do their jobs. Let the prosecutors do their jobs,” he said. And political candidates should answer questions. And Fetterman has “taken a strong stance of letting people convicted of murder be released.”

And as for legalizing all drugs, “Oregon actually did this experiment and Fetterman supported it. There was a 50 percent increase in homicide rates…People pay with their lives.”

“I’m not a politician,” he said. “I’m a heart surgeon…I’ll unite us. I’ll bring balance and I’ll address the challenges we’re facing.” 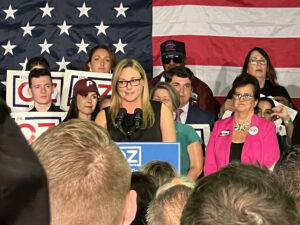 State Rep. Martina White (R-Philadelphia) was also on hand. “Here’s one thing I know for a fact: I could never support a guy who wants to let murderers and criminals out onto our streets,” she said. “We already have one of those in Philadelphia. (District Attorney Larry) Krasner. That guy’s got to go.

“John Fetterman is just the same. He wants to bring those dangerous policies to Washington and to America. And cannot afford to let that happen.”

Bucks County Republican Chair Pat Poprik also emphasized the need to vote and to bring others to the polls because this is the most important election in “our lifetime.”

Bensalem resident Andrew Tyra told Delaware Valley Journal he came to America from Poland 35 years ago and supports Oz because “he’s fighting for what we’re fighting for…The other guy can’t even make one sentence.”

Philadelphia resident Ronni Newton said she supports Oz because she is pro-life.

Jerry Adler of Warrington supports the entire Republican ticket because, “I believe in our liberties, freedom and our constitution.”