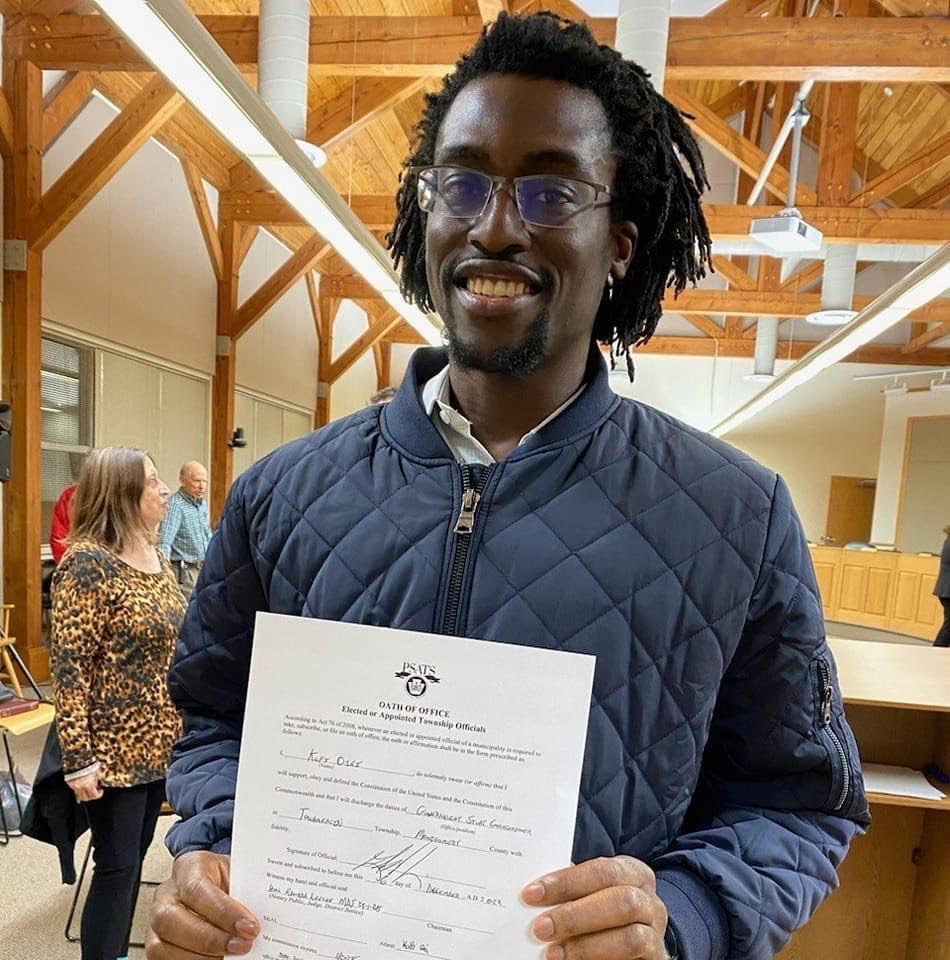 Kofi Osei, one of a slate of candidates from Towamencin NOPE (Neighbors Opposing Privatization Efforts), led the successful effort for voters to approve a Government Study Commission in Towamencin to recommend whether the township should adopt a “home rule” charter.

NOPE opposed the sale of the township’s sewers.

While affiliated with other local, grass-roots NOPE groups in Bucks County, Conshohocken, and Norristown that share the same ideas and values, Towamencin citizens are in charge of Towamencin NOPE.

“I was looking through the Township website to find out what our trial plan was like and noticed that we were exploring sewer monetization,” Osei said. “I have read about what had happened in other municipalities and reached out to David McMahon, who started the first NOPE group in Norristown.”

McMahon and Osei are both members of the Buxmont Branch of the Democratic Socialists of America. Osei has been in Towamencin for 26 years and many of his friends and family are still around.

“I wanted to get involved first and foremost because Towamencin is where I grew up, and I did not want to see my friends and family sold out to some big utility company,” Osei added. “The more I read about water/sewer privatization, and specifically the ‘fair market’ valuation method PA uses, the less I thought it was a good idea and wanted to make sure the people of Towamencin knew what was going on before they eventually get the bill a few years later.”

Osei, 29, one of seven individuals, will serve on the Government Study Commission, which evaluates how well-run the local government is and solicit feedback from residents.

Before promoting the commission, Osei went to township meetings for a year and was appalled that a governing body could so blatantly ignore facts and constituent opinion on such a huge decision. Osei wanted to make a charter where that would never happen again.

“I believe home rule has the potential to stop the sewer sale. I do not see any merits in fully privatizing water/wastewater utilities. I believe a charter precluding the township from selling such utilities would be the best,” Osei said. “Some other municipal charters in other states have similar privatization bans. Besides the sewer sale, Pennsylvania has very weak citizen provision, and the only way to get a broad referendum right in PA is to have a home rule charter that gives citizens that right.

“If the government study commission writes a charter that stops the sewer sale and adds referendum options, I hope Towamencin voters will be responsive in a future election,” Osei added.

In other services to the community, Osei was involved in the KEY club at his high school, where he volunteered for many events held in the area.

Osei completed his undergraduate degree in Computational and Applied Mathematics from West Chester and works as an actuarial analyst in health insurance. While Osei was not politically active before NOPE, he hopes to stay involved locally.

“I have no strong plans currently. This non-partisan, issue-focused, and hyper-local type of politics has been much more enjoyable than a lot of the partisan stuff at the state/federal end,” Osei said. “I perceive a need for the General Assembly to reform our utility laws, especially with how messy the Chester Water Authority and DELCORA situations are.”

Despite Opposition From Residents, Towamencin Sells Its Sewer System

Towamencin residents opposed to the sale of the township’s sewer system to a private company are continuing to fight.

Township supervisors voted 4-1 on May 25 to sell the sewer system to NextEra Water for $115 million. Supervisors cited various financial burdens the township faces as a reason for the sale, in an editorial in North Penn Now.

“In looking at options to meet these financial challenges, we noted that other local municipalities have sold their sanitary sewer systems to private operators, such as PA American Water or Aqua America. In speaking to the elected officials and staff of these municipalities, they were generally pleased with the results of selling their systems, so we felt that we had a fiduciary responsibility to see if this could be a viable option to help us meet our projected future needs as a community,” the supervisors wrote.

NOPE, a group of Towamencin residents who fought the sale, is continuing to try to stop the deal from being finalized. On its Facebook page, NOPE leader Kofi Osei said the group will go to the state Public Utilities Commission to object and also try to have Towamencin residents adopt a new charter.

However, if the PUC approves the deal, some say residents are likely to pay more.

“These residents have already paid for this once and now they’re going to pay for it again. It’s absurd,” said attorney Frank Catania, who represents the Chester Water Authority and Southwestern Delaware County Municipal Authority.

The Pennsylvania legislature legalized these types of purchases in 2016 via Act 12. Since then, utility companies have been convincing towns and authorities to sell their water and sewer infrastructure.

“And the current legislature hasn’t corrected it,” said Catania. “It really hurts ratepayers. It doesn’t give them any say at all…The legislature in 2016 created a feeding frenzy, which is still going on.”

“What they really need to do is explore the possibility of a surcharge action against them,” he said. “That is where you can hold an elected official responsible if the township has lost money. It’s not a widely used area of the law…there are laws on the books that can be applied in this situation. The ratepayers have to pay for a borrowing the supervisors have made forever. They never get to pay it off.”

“The ratepayers get hurt badly,” said Catania. “There’s no grace period.” In a recent Public Utilities Commission (PUC) case regarding Willistown, an administrative law judge “called those rate freezes ‘political theater.’ That’s how they look at it.”

“Until people start to address the problem, the supervisors who vote for these things, and either get them removed or surcharged financially, it’s going to keep going on.

“This is the only kind of transaction where the buyer and the seller are both trying to get the highest price,” said Catania. “Because they don’t have to pay for it. The buyer will get all the money back from increased rates…Who borrows money to get paid back permanently over many generations?”

As for the Towamencin supervisors who voted to sell the sewer system, they are “financially illiterate,” he said.

Meanwhile, a May 31 letter from the Pennsylvania Municipal Authorities Association, Region One that includes Bucks, Chester, Delaware, Montgomery, and Philadelphia Counties, tells municipalities it opposes these sales.

“The customer pays for the original installations and capacity in their mortgage. The customer then pays for the system again as the private entities recover all of their acquisition expenses – plus profits, by raising customer rates,” the letter reads.

“However, the pain does not stop there, since even after paying for the infrastructure twice, the increased rates imposed upon the customers continue and typically will rise every few years – after all, the money-making machine runs in perpetuity!

“Meanwhile, the funds received by the governmental entity selling your systems will eventually be spent – resulting in unfunded programs and employees hired with the temporary cash. This will require another tax increase to fill the void. The bottom line is that the seller grabs the money, and the customer is left behind to pay both higher water and sewer bills, and higher taxes.”

Not surprisingly, a utility company spokesperson had a different view.

“We understand residents have questions about future rates,” said Steve Stengel, spokesman NextEra Water. “What we know is that under our plan, which was approved by the board of supervisors, we proposed that rates be frozen for two years. Future rates will be subject to the review and approval of the Pennsylvania Public Utility Commission and it is impossible to speculate on what they will be five or ten years into the future. It is also important for township residents to understand that we are committed to meeting the highest standards for the sewer system and providing the highest quality of service to community residents and businesses.”