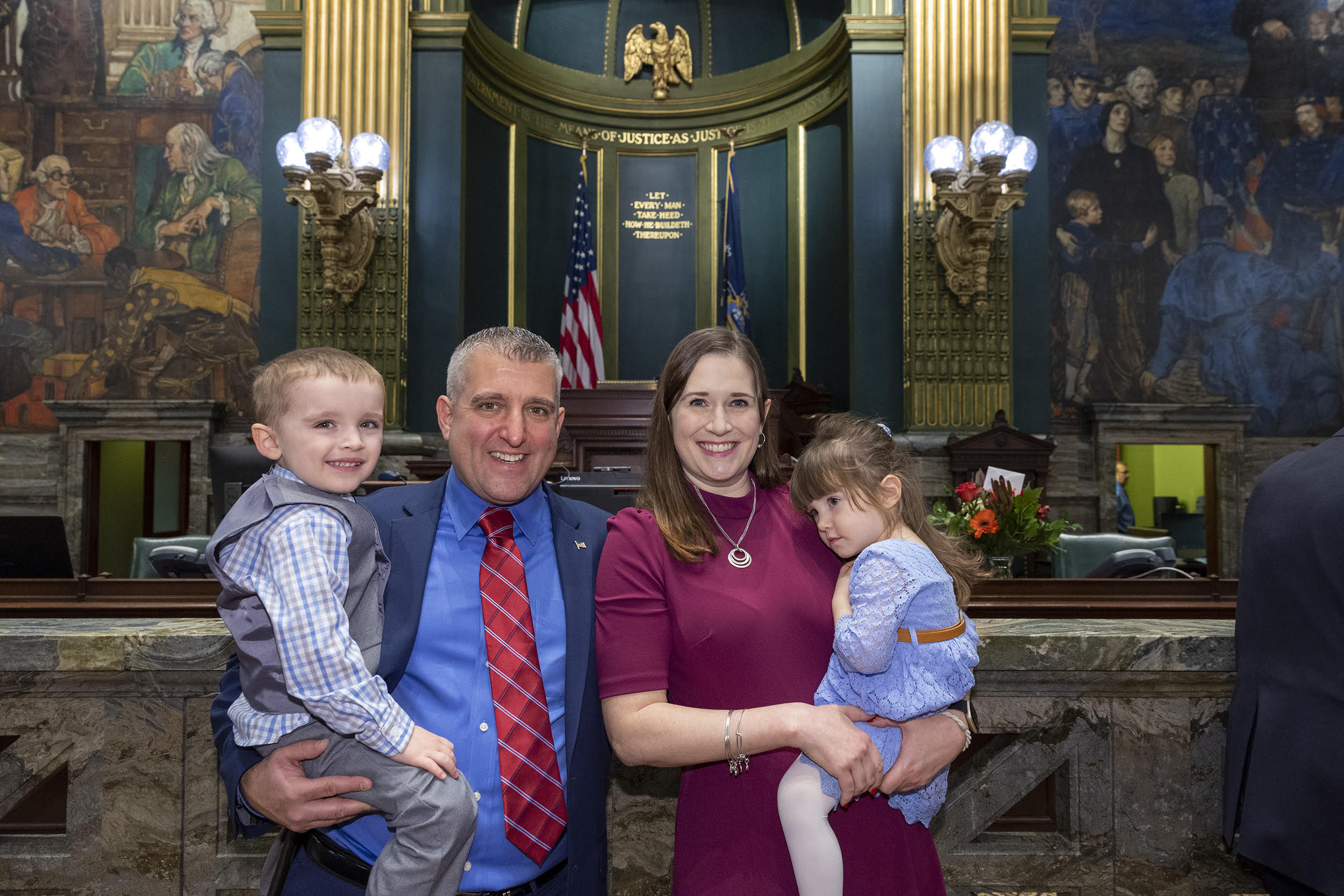 Several newly elected Delaware Valley state legislators took the oath of office at the state Capitol on Tuesday. All the new members said they were excited to get started in their new positions.

“It was an honor to be sworn in to the Pennsylvania Senate. It was a humbling day and I am now ready to get to work and serve the people of the 6th Senatorial District,” said Sen. Frank Farry (R-Bucks).

Republican Sen. Tracy Penncuick said, “It’s a tremendous honor to represent the citizens of Berks and Montgomery Counties in the Senate and I look forward to being their voice on issues that matter to them. The new session promises to be a busy two years, and I’m ready to get to work advancing legislation that benefits Pennsylvania taxpayers and families.” 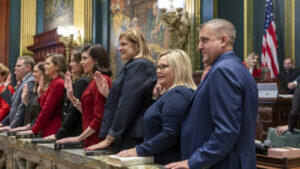 Rep. Joe Hogan (R-Bucks) was sworn in Tuesday to serve his first term.

“It is an honor to begin serving the people of the 142nd District in Harrisburg,” Hogan said. “I look forward to bringing results back to Bucks County and continuing to make our community a great place to live, work and raise a family.” 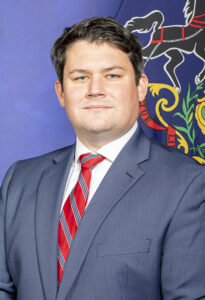 Rep. Kristin Marcell (R-Bucks) said, “I am honored to represent the residents of the 178th District. I thank them for placing their faith in me to share their concerns and craft legislation to solve those problems.”

Rep. Lisa Borowski (D-Delaware) said, “With this new freshman class comes new ideas and opportunities for Pennsylvania to grow. I’m looking forward to working with my colleagues in the House to make sure your priorities are represented. I’m ready to get to work and serve my neighbors in this new role.”

“It’s a great honor that the residents of the 159th District gave me the opportunity to be their advocate in our state legislature,” Rep. Carol Kazeem (D-Delaware) said. “I look forward to bringing up the topics that our commonwealth needs to seriously discuss and enact change that will improve the quality of life for all 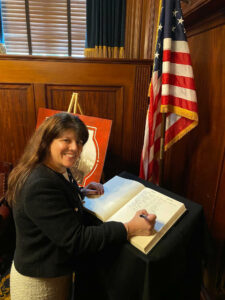 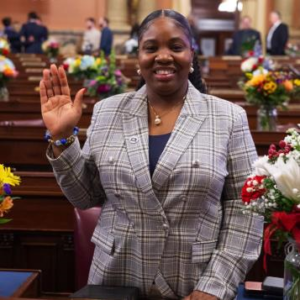 Rep. Brian Munroe (D-Bucks) said, “I am humbled beyond words for the opportunity to provide a voice for friends, neighbors, and residents of the 144th Legislative District. I look forward to accomplishing the work that must be done for our commonwealth to continue on its upward trajectory. We have a chance to put Pennsylvania on a prosperous path, and we must meet this moment by working in unison to enact concrete policies that achieve goals across a broad spectrum.” 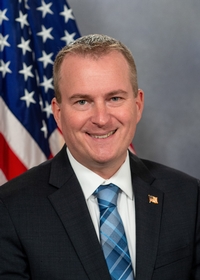 Rep. Greg Scott (D-Montgomery) said, “I am honored to represent Pennsylvanians in Harrisburg and most importantly the residents of the 54th Legislative District at home,” said Rep. Greg Scott, D-Montgomery. 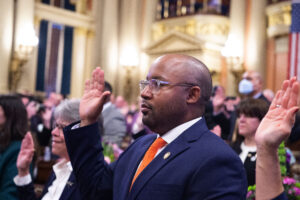 “The 54th Legislative District is a fantastic mix of communities that I am excited to carry. I vow to invest in those communities at home as well as advocate for better schools, an economy for everyone, and for investment in our infrastructure.”

“I am honored to begin working for the residents of the 151st Legislative District as their new state representative,” said Rep. Melissa Cerrato,( D-Montgomery). “I am here to listen to and uplift the voices of the communities that I represent and help bring about positive change for all Pennsylvanians. It’s a privilege to represent my neighbors in Harrisburg and a responsibility I will not take lightly.” 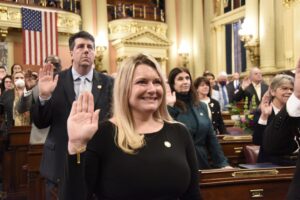 Rep. Paul Friel (D-Chester) said, “Today is a monumental day, not just for me, but for all of Pennsylvania. I look forward to working alongside my colleagues to bring forth the change Pennsylvanians want to see in their government.” 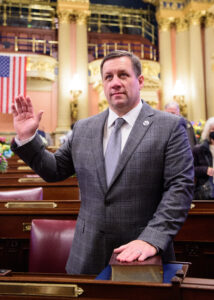 “Being sworn in today as representative of the 156th District was the honor of a lifetime,” Rep. Chris Pielli (D-Chester) said. “My colleagues and I hope to hit the ground running and bring positive, lasting change to the lives of Pennsylvanians.” 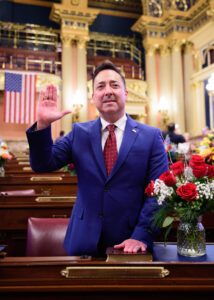 Rep. Tim Brennan (D-Bucks) said, “Swearing-in day is today, thank you so much to the people of the 29th district who gave me the opportunity to do this important work!”

“Representing Montgomery County in Harrisburg is an honor. I look forward to bringing results back to our community,” said Rep. Donna Scheuren (R-Montgomery). 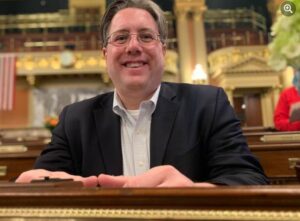 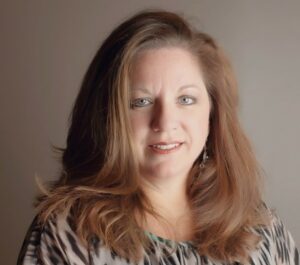 Democrats will likely control the state House once three special elections are held to fill vacancies. Also, on Tuesday, the House voted to make Berks County Democrat Rep. Mark Rozzi speaker. Rozzi pledged to be an independent. Republicans remain the majority in the state Senate.