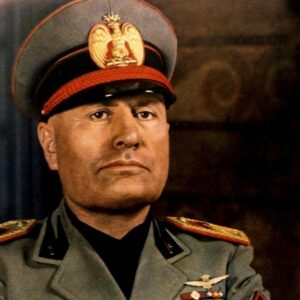 The man who styled himself Il Duce (The Leader) was all those. And more. Yet 77 years after he was shot and hanged upside down before an angry mob in the ruins of a bombed-out Milan gas station, one remnant of his legacy still lingers. “He made the trains run on time.”

But did he really?

Viewed from the 21st century, the father of Fascism looks like a cartoon character. Big-chested, big-jawed, big talker, a man able to strut while sitting down. He had a thing for balconies where he loved haranguing cheering crowds for hours. It was easy to draw huge crowds when attendance was mandatory and cheering was “encouraged” by the Blackshirts, street thugs loyal only to the big guy himself.

But in the 1920s and 30s, Mussolini was viewed by some in the U.S. and Europe as the face of the future, a powerful figure who took bold action and got things done. As the world sank into the grip of the Great Depression, many people at home and abroad wondered if Mussolini personified things to come.

And his claim to fame, the one thing that stood head and shoulders above all others was, “He made the trains run on time.”

From the minute the first steam engine chugged into Italy, its rail system was “challenged.” Italians never developed the iron discipline that American, British, and German rail barons brought to the Iron Horse.

When World War I ended Italy’s railways were in shambles. Tracks were in disrepair and timetables were a joke.

Then Mussolini burst onto the scene, bellowing that he would make everything right–including the country’s chaotic rail service. Soon people were saying over and over, “The trains are running on time.”

But did they really?

Like all dictators everywhere, Mussolini knew the value of good propaganda. And he made sure he got lots of it. His minions cranked out miles and miles of press releases trumpeting his achievements.

Mussolini did indeed spend money and effort on improving rail beds and imposing a certain degree of order on Italy’s rail lines. But it was almost entirely focused on those used by foreign visitors. Meaning they went home and reported the miracle Mussolini was making.

The article reported, “The spirit of discipline which the Mussolini government brought with it is no more concretely marked than on the railroads … Italian trains now run on time since the advent of Italy’s young dictator to power. The Italian crack trains on the main lines cover the distances with minute precision and according to schedule … Special policemen do service on all the lines and are present to prevent theft or disorder.”

Did you catch the “special policemen” reference? That was the Blackshirts again, making sure Italians stayed in line even while on the move.

And so it went until Mussolini teamed up with a neighbor and unleashed World War II. Then the trains brought in hundreds of thousands of German troops, eventually leading to Italy’s military defeat and Mussolini’s downfall and death.

Still, whenever Mussolini’s name comes up more than 75 years later, someone always adds, “But remember, he made the trains run on time.” Except, of course, that he didn’t.