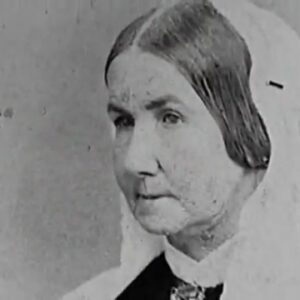 Anna was a typical mom. She loved her kids with the passion found only in a mother’s heart. And something she did for her son made her an icon for mothers everywhere.

Here’s how it happened.

They say a woman can’t resist a man in a military uniform. That apparently was true with Anna. In the 1820s, she fell in love with a West Point cadet named George. They married in 1831.

A Southern belle from North Carolina, Anna and George started life together in the North. Their first child, a boy named James, arrived in 1835. George resigned his Army commission and jumped into designing that brand-new high-tech transportation marvel — railroad locomotives. He soon switched to constructing rail lines.

The young family grew. Besides raising three children from George’s first marriage, the couple had three more sons, two of whom died young. Anna doted on her surviving boys. William was a serious scholar, while James was a daydreamer with an artistic gift. Anna nurtured and encouraged both. She was strict (Sundays were strictly observed with no toys and no books allowed but the Bible) yet also very loving.

George’s skill at building railroads eventually led the family halfway around the world. Russia’s Czar Nicholas I sent representatives to study America’s booming railroad business. They were so impressed with George’s skills that they offered him his dream job: supervising the construction of a railroad linking Moscow and St. Petersburg. George checked with Anna, who said, “Go for it.” So, they headed off to Mother Russia, where they became friends with the czar and socialized with nobility.

By now, James’ talent as an artist was apparent. Anna pulled some royal strings and enrolled the boy in the prestigious Imperial Academy of Arts. The happy family seemingly had a bright future ahead.

Until George contracted cholera and suddenly died in 1849.

A sympathetic Nicholas offered to educate the boys at the Imperial School, but Anna politely declined. Shaken and heartbroken, she gathered up her children and moved first to Connecticut, then New York.

With her income slashed from $12,000 a year to just $1,500, pennies were pinched, dollars were squeezed, and somehow she made ends meet. She was even able to send William to medical school.

Though Anna hoped James would become a minister, he was appointed to the U.S. Military Academy when he turned 17 instead.

But James and West Point weren’t a good fit. After three years of lackluster studies, the breaking point came when he failed a chemistry exam and quietly resigned. (James later said, “If silicon had been a gas instead of a solid, I’d be a major general today.”)

Free at last to indulge his love of painting, James headed first to Paris and then London.

While all that was happening, America was sliding ever closer to a civil war. Anna and James returned to her native North Carolina, where he became a Confederate surgeon. As the conflict raged, Anna increasingly missed her son across the pond. The Union’s naval blockade of Southern ports stood between them. But no cannon was powerful enough to stop a mother’s love. On a dark August night in 1863, Anna boarded the blockade runner Advance. It was a daring thing to do for a woman who was pushing 60. Yet Anna was determined.

The Advance slipped through the patrolling warships, and she had a joyous reunion with James at his London studio. Though caught off-guard by his flamboyantly bohemian lifestyle, she nevertheless showered Southern hospitality on his many friends by serving them tea, preserves and homemade biscuits.

A few years later, James asked Anna to pose for him. Some said she filled in for a model who couldn’t make it; others claim James intended his mother to be the subject all along. We do know he wanted her to stand. But now 67 and her health failing, he wound up painting her seated in profile, hands properly folded in her lap.

Entering a VIP showing in London in 1872, James titled his work “Arrangement in Grey and Black No. 1.” Victorian critics wouldn’t accept it as an arrangement since it was clearly a portrait, so they renamed it “Portrait of the Artist’s Mother.”

It eventually morphed into the name we know today. Because James was James McNeill Whistler, Anna was Anna McNeill Whistler, and the portrait on display today at the Musee d’Orsay in Paris is simply dubbed “Whistler’s Mother.”

More than the likeness of one man’s mother, it is an enduring tribute to the love of mothers everywhere. 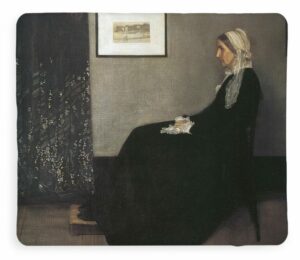