BILITY FAMILY: We Have Had Enough 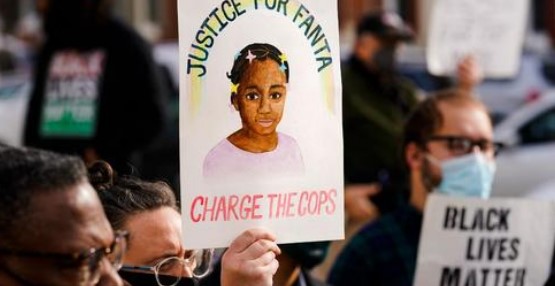 Editor’s Note: This statement was read by lawyer Bruce L. Castor Jr. at a Darby Township meeting this week. The Darby Board of Commissioners then voted to extend by 60 days the suspension of the Briarcliffe Fire Company whose members made disparaging remarks about Fanta Bility.

The family of little 8 year-old Fanta Bility is not here tonight to accept an apology nor participate as a prop as part of a community discussion. They have asked me to read a statement which I shall now do.

From the very beginning of the saga following the killing of Fanta at the hands of Sharon Hill Police and the wounding of several others, Fanta’s family have tried to respect the process of the justice system here in America without hyperbole, exaggeration, or accusations of immoral motives.

They love their adopted country and their adopted community. They believe in America’s ideals and promises. They trust America’s institutions, her police, her firemen, her prosecutors, her judges, and her juries. They wear the flag of their adopted nation on their sleeves. Able to distinguish between people doing bad things as opposed to America itself, and this community, in particular, being systemically bad.

That ends tonight. Yes, Fanta’s family realize their community might not be the best funded nor possess a well-trained and supervised police department. But this community has systematically and deliberately, at every turn, sought to devalue and de-humanize Fanta — with cruel, callous calculation.

(Fanta was) a girl who loved her family her friends and exulted in being an American. On at least four occasions, the life and memory of Fanta was dismissed as meaningless, insignificant, irrelevant, and appallingly, as laughable.

Once, when Sharon Hill Police officers turned their backs on active shooters and fired their weapons in the opposite direction. Worse, they fired at a moving car without regard for the safety of the innocent people in that car, nor the huge number of people in the ever-changing background as the officers tracked the car as is rode by bullets whizzing past by the dozens: one striking Fanta’s sister and another killing Fanta who lay dying in her mother’s lap, awake, alert, terrified knowing that her life was draining out of her…and her mother knowing the same — and she will never recover from that knowledge, much like Fanta can never be brought back to life.

But the Bility family believes in America and our institutions. Fanta’s life would be respected. Sadly, firemen from Briarcliffe Fire Department thought so little of the value of Fanta’s life they disparaged her on a hot mic, mocking her name and some say her ethnicity. No longer a little girl, a victim of gunshots…no…they reduced her to a punchline.

Thirdly, there was a preliminary hearing last week. Fanta’s family went there, as good American’s would, to see justice done. Only they were outnumbered 10 to 1 by off-duty police officers there to laugh and joke with the men a grand jury said were responsible for killing Fanta. It was not difficult to see which people in the courtroom gallery were Fanta’s family. No chance there could be any mistake at a simple glance.

And those men charged looked for all the world that the proceedings were a joke, nothing to worry over or take seriously — all in full view of the grieving family. This was the fourth direct and incontrovertible demonstration that Fanta’s life has no value — in much the same way, indeed, the same type of people, who have insultingly made no serious effort to settle the civil litigation coming out of the inept training and supervision Sharon Hill Borough provides its police.

The public servants tasked with protecting this community and making amends for its mistakes have failed little Fanta. She failed her family of patriotic, formerly enthusiastic first-generation Americans from West Africa. It’s sad, disappointing, and disgusting. No, Fanta Bility’s family is not here tonight to accept an apology. They are here now to say they have had enough.