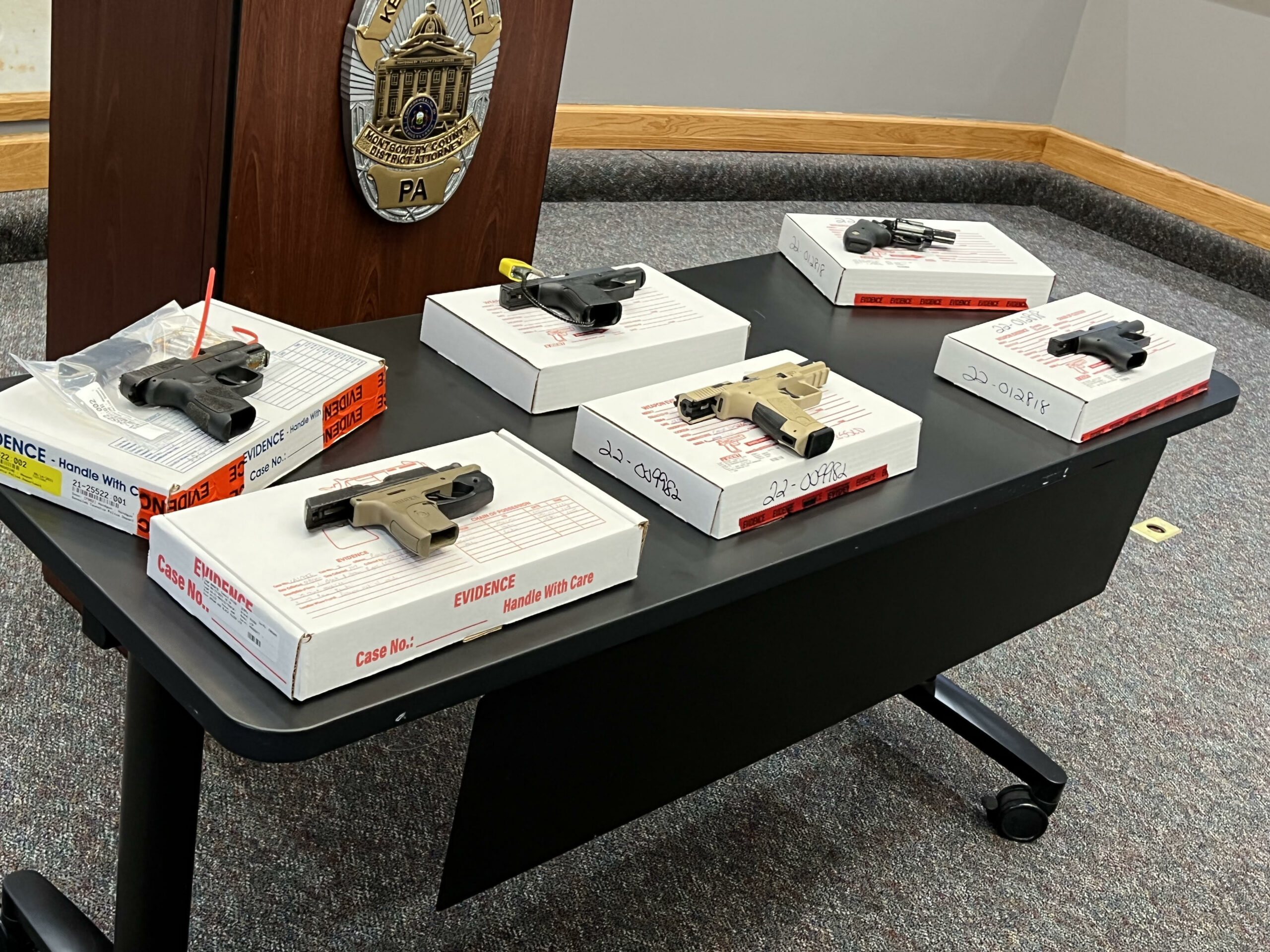 Twenty-year-old Clayton Robinson of Glenside is the alleged mastermind behind a multi-county gun trafficking ring, where guns were bought by straw purchasers, stripped of their serial numbers, and then sold for cash or bartered for drugs, Delaware Valley officials said Thursday.

The gun ring is also said to have stolen some of the firearms they traded.

Montgomery County District Attorney Kevin Steele and Bucks County District Attorney Matt Weintraub were on hand with Abington Police Chief Patrick Molloy and numerous officers and detectives for a press conference announcing the arrests. The six guns that police and detectives had seized were on display. However, there are at least 34 guns involved in the scheme, with more likely, said Steele, who added the investigation is ongoing.

Robinson and his crew also sold guns with “switches” they had made to change the firing action from semiautomatic to fully automatic.

“It’s going to fire the entire number of bullets that are in that gun,” said Steele. 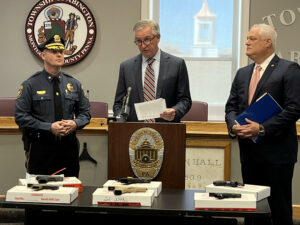 “This was a true family business,” said Weintraub. “And the product was illegally purchased firearms.”

Clayton Robinson said in a message found by detectives, “I’m not trying to end up in a tri-county tooling ring. Feel me.”

“That’s exactly what these individuals have done,” said Steele. “Tool” is slang for gun.

Clayton Robinson was found in possession of an illegal gun and “this led us to all of these other straw purchases,” he said.

As well as officers and detectives in Montgomery and Bucks Counties, investigators worked with the ATF, FBI, and Attorney General’s Office he said.

“We looked through the electronic record of sales (EROS) and ATF and Pennsylvania state gun sales forms,” he said. At gun stores, cellphone downloads, social media posts, and surveillance, he said.

“Straw purchases of guns for people not allowed to purchase them is dangerous, and is dangerous to our communities,” said Steele. “That is why we are emphasizing these investigations and will continue to investigate.”

Photographs of Clayton Robinson holding one of the guns and also a video of him grinding the serial number off of it were displayed.

“This (video) was made because he’s letting his customers know he’s taking the serial numbers off these guns,” said Steele.

“Quite frankly, we appreciate the very strong evidence he has provided to us,” said Steele.  Also, there was a text message from Clayton Robinson saying, “Come drop me off a pistol, too. I really got to stay dangerous.”

Steele asked anyone who knows where the other guns are to come forward before SWAT officers raid their homes. The guns can be turned in anonymously through their lawyers.

Weintraub said several of the firearms were found through car stops by police in Bensalem, Yardley, and Middletown and praised the “great police work” involved.

“Thank God for criminals who like to show off,” said Weintraub.

“The vast majority of these guns were purchased seemingly legally in Bucks County,” he said. But 28 guns “are still out there in the hands of criminals, who intend to terrorize, maim, hurt and kill. This is unacceptable…Something has to be done about this.”

“Fighting illegal gun trafficking is our top priority in Bucks County,” said Weintraub. “We are all in on this.” 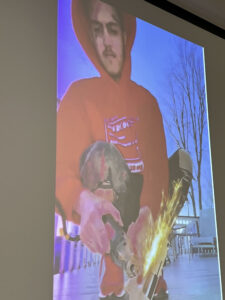 Clayton Robinson, a suspect, removing a serial number from a gun.

Several gun stores in Bucks County had sold the guns to the straw purchasers and are cooperating with authorities, he said.

“This is a scourge. Drugs and guns go hand and hand and we know that” he said. “The combination is not only dangerous. It’s deadly. And it’s proliferating.”

Weintraub said a lot of law enforcement agencies are working together.

“It’s all hands on deck to eradicate this scourge,” he said.

Asked if the guns were used in other crimes, Steele said some were, including in Idaho and Massachusetts.

The suspects made small amounts of money or traded the guns for drugs, said Steele.

“This is people making not a lot of money, hundreds of dollars, and now they’re facing five-year mandatory sentences for a small amount of money and a small amount of drugs. If anyone thinks it’s worth it, they’re sadly mistaken,” Steele said.

“The five men were operating a corrupt organization,” said Steele. “When you talk about straw purchases, individuals who can legally buy guns were buying them and putting them in the hands of criminals.”

When someone does this more than once it is a 5-year mandatory sentence under the Brad Fox Law, named for a police officer who was killed with a firearm bought through a straw purchase, said Steele.

The five men face multiple charges, including conspiracy, unlawful purchase of firearms, and criminal use of communication facilities, said Steele.

“We’ve got this epidemic of gun violence,” said Malloy. “When you think of Abington, Montgomery County being five short miles away from one of the most violent neighborhoods in our country and for us in Abington our officers during car stops are witnessing more guns…often it starts by good proactive policing.”

Abington Police had a search warrant for Robinson’s house and used a drone to find a gun that he had hidden on his roof, said Steele.

“Just because we haven’t tied any of these guns to any homicides, there is no doubt if we were not out there doing this work, then one of these guns would be responsible for taking the life of someone,” said Malloy.

Steele said if one of the trafficked guns is found to have been used in a homicide or shooting the sentencing judges for the defendants will be informed of that fact.

The affidavit of probable cause said the ring members were involved in a “gun trafficking operation.”

“The purpose of this corrupt organization was to illegally obtain and distribute numerous firearms to others,” it said. The ring members “conspired to purchase firearms illegally, making materially false statements on the application/record of sale and then illegally transferring the firearms.”

While most of the members of the straw purchase gun ring are in custody, authorities are seeking Lynch, who is on the lam and may be in Kentucky.