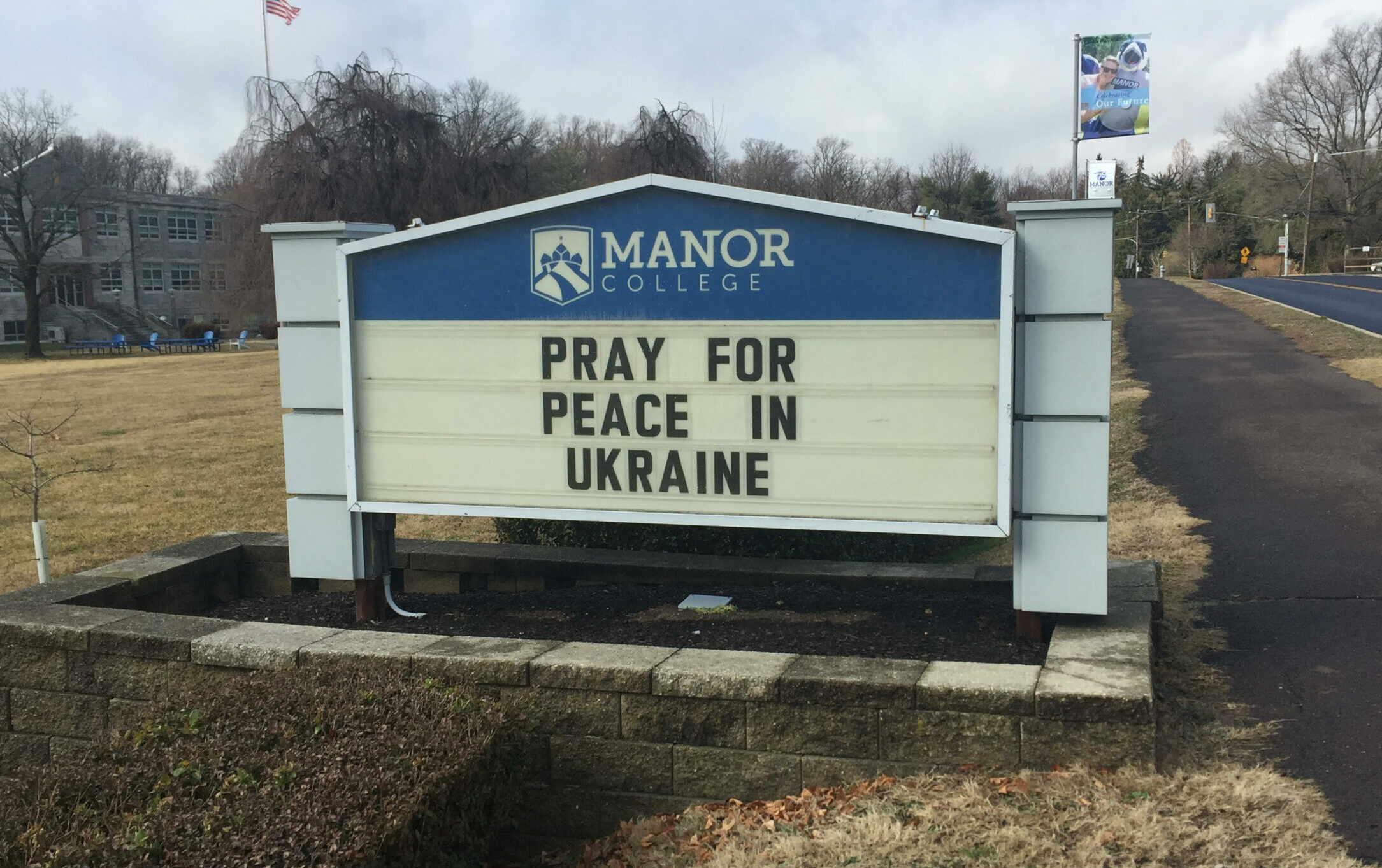 Delaware Valley residents with ties to Ukraine are watching in horror as the Russian army rolls toward Kyiv.

Many came to a rally at City Hall in Philadelphia Friday to show their support for the beleaguered country.

At Manor College in Abington, founded 75 years ago by the Ukrainian Sisters of St. Basil the Great, students and staff held a Zoom service Friday to pray for Ukraine. Signs with the message “Pray for Peace in Ukraine” abound on campus.  Many students, alumni, and staff at the small college have relatives in Ukraine.

Nicholas Rudnytzky, the college’s dean of academic services, grew up in Philadelphia. His parents immigrated from Ukraine after World War II. He still has family in Lviv in the western part of Ukraine, which is “very far from the front lines.” 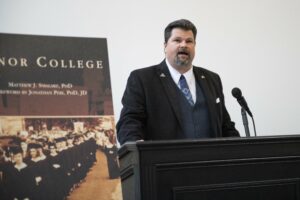 “They’re fine,” he said about his relatives. “They’re mad. They’re angry. Like most of the country, they’re defiant.”

Asked if they intend to fight, Rudnytzky said they do but added, “the Russian war machine is ranked third in the world.”

While it is shocking that Russian President Vladimir Putin’s army is invading Ukraine, in some ways, it is not, he said.

For one thing, the world did very little when Putin took Crimea from Ukraine in 2014, he said. And Russia and the Soviet Union have a centuries-long history of oppressing the Ukrainians.

“A good contingent of the Ukrainian community was expecting this,” said Rudnytzky. “Moscow had repeatedly denied our existence. The czarist government of the past made our language illegal. In 1946, the Russian Orthodox Church liquidated the Ukrainian Catholic Church.” Clergy were exiled, leaders killed or sent to Siberia. Soviet dictator Joseph Stalin created a deliberate famine in Ukraine in the 1930s that killed millions.

“They committed genocide against our people,” said Rudnytzky. “This is horrifying that in the 21st century, in Europe, such a thing could happen.”

He questioned the efficacy of the United Nations and NATO. If it were somewhere else and did not involve Russia, “we’d have U.N. peacekeeping troops.”

In the 1990s, the U.S., Great Britain, and Russia signed an agreement with Ukraine, saying they would protect it if it gave up its nuclear weapons, he noted.

“We promised we’d protect them. But when Russia took Crimea, everyone looked the other way.

“Now there is a huge contingent wondering whether China will take a lesson from Russia,” he said. “This is an attack on a democracy in Europe.” 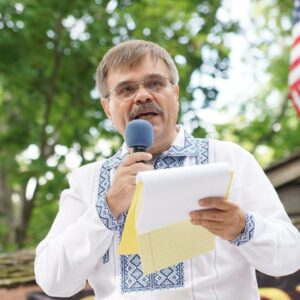 Eugene Luciw is also the son of Ukrainian immigrants. He is the president of the Philadelphia branch of the Ukrainian Congress Committee of America and director of external relations for the Ukrainian Sports Center and Ukrainian National Soccer Club in Horsham.

He agreed Putin was emboldened by the lackluster response to his theft of the Crimea.

“Mr. Putin takes to weakness like a shark takes to blood in the water,” Luciw said.

He has relatives and friends in Ukraine.

“Many of them are in bunkers, in subways,” he said. “My heart is there with them. In the modern world, people I had visiting in the United States are in bomb shelters and subways trying to stay alive.”

The attack is personal for Luciw. 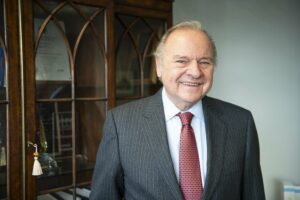 “I feel violated,” he said. And the world order is now changed where “a heavily militarized imperial power can simply take another country over.”

Leonard Mazur, a Manor College trustee and chairman of the college’s Ukrainian Community Committee, said his parents also fled Ukraine after World War II, and his mother had been in a German forced labor camp during the war.

“What’s happening here is a tragedy,” said Mazur, who is appalled that “the world is standing by, letting this happen. I don’t know how people, how governments that have any degree of morality can do that. It’s awful.”

Putin is taking over a country “under false pretenses,” he said. He urged people to talk to their representatives, senators, and the White House to put still stronger sanctions in place and that the U.S. arms Ukraine so its citizens can fight back.

“How do you just stand by and watch people get slaughtered?” he asked. 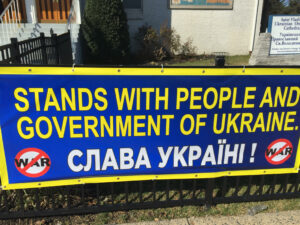 A sign at St. Vladimir Ukrainian Orthodox Cathedral in Philadelphia.

And on the prayer front, Philadelphia Archbishop Most Reverend Nelson J. Pérez w celebrated a Mass for the intention of peace in Ukraine, the Ukrainian People, and the Ukrainian community in Philadelphia this Sunday at the Cathedral Basilica of Saints Peter and Paul.

St. Vladimir Ukrainian Orthodox Cathedral in Philadelphia was packed Sunday morning as people offered prayers for the war to end.

Tatayna Lylyk, a congregant, said, there are “a lot of reasons” for the war but the main one is Putin and “rich people who want power.”

Lylyk came to Philadelphia in 2002 from Kyiv when she was 36 but most of her family and many friends remain in Ukraine.  she is worried about them and fears for the future.

“It is prohibited to come out from “your” home,” she said. “There are saboteurs on the streets which want to help Putin  in this war. (But) people stay for their homeland.”

“Why (does Putin) need our Ukraine? I think he’s crazy. I think he’s scared in some way. He is wrong in his mind,” she said.