FISCHER: A Chanukkah Lesson for Biden 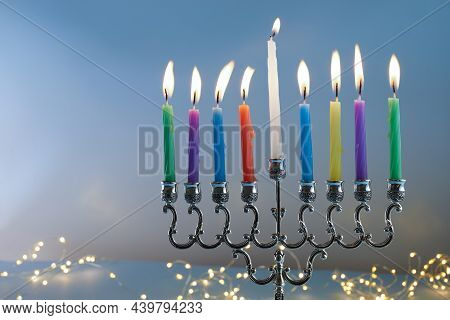 Jews are in the midst of celebrating Chanukkah. Marking the holiday, President Joe Biden called Chanukkah a “undeniably American” festival. But, with policies he and his supporters are pushing on a resistant population, he doesn’t seem to realize the half of it.

Chanukkah is a lesser Jewish festival, lasting eight days from the 25th day of Kislev on the Hebrew calendar. It commemorates the rededication of the Temple by the Maccabees in 165 BC after its desecration by the Syrians. Many refer to it as the “Festival of Lights.” Some mistakenly call it Jewish Christmas.

Biden celebrated the start of Chanukkah with his “undeniably American” statement, adding the lessons it offers are akin to America’s democratic founding. Biden said “[i]t teaches us that even a little bit of light, wherever it is found, can dispel the darkness and illuminate a path forward” and “reminds us that whether it is the Holy Temple in Jerusalem or the temple of our democracy, nothing broken or profaned is beyond repair.”

If Biden understood the history of how Chanukkah came to be, his choice of words might be more guarded.

Chanukkah is a joyous time in Jewish communities. It includes the nightly lighting of candles, gift-giving, parties, and family gatherings. Treats such as latkes (potato pancakes) and sufganiyot (donuts filled with cream or jelly) are devoured in great quantities. But its roots are far from joyous and can be compared to what’s occurring here today.

Starting around 200 BC, Judea – now Israel – came under Syrian (Hellenistic) rule. When Syria came under Roman rule and levied oppressive taxes, a substantial part of that burden was placed upon Jews who already shouldered the heaviest burden. By 174 BC, Syria – including Judea – was ruled by the tyrant Antiochus IV. He “tried to rule out individualism of the Jews” and destroy all Jewish tradition and rules. According to the Chabad story of Chanukkah: “Jewish worship was forbidden; the scrolls of the Law were confiscated and burned. Sabbath rest, circumcision, and the dietary laws were prohibited under penalty of death.”

Thousands of Jews who opposed these rules were punished – to the extent of being put to death.

The Jews were divided into two camps: The Torah-based (adhering to the first five books of the Bible), and Hellenistic Jews who took on the laws and customs of their tyrannical Syrian-Greek rulers. The latter adopted practices like idol worship. Jews who pushed back were became known as Maccabees. They fought the Syrian armies, eventually liberating Jerusalem and the Temple. When they went to light the menorah as part of its rededication, there was only enough oil for one day. By a miracle of G-d, the oil burned for a total of eight days.

So, what does all this have to do with Biden and why should he be nervous?

For many of us in the Jewish community, the original precept of Chanukkah has taken on a new and deeper meaning. Many of us are watching as a large number of Americans, including Jews, are forced to submit to mandates or face consequences ranging from not being able to eat in restaurants or go to the store – to the point of losing one’s livelihood.

We are watching as government agencies intimidate parents who want more control over their children’s education. We watched last year as retailers and casinos were allowed to reopen while schools and houses of worship remained closed or limited. We are watching as our government slowly chips away at Americans’ individualism.

Some of my fellow Jews balk at Biden’s statement that the Chanukkah story is undeniably American. But Biden is correct since America came about after throwing off the tyrannical rule of the British. The king burdened the colonies with taxes and tried to rule out individualism as well.

So – fast-forwarding to today – this administration needs to take heed of the same spirit and dedication to freedom, especially freedom of worship and freedom of the individual, arising under similar circumstances.

No one rational calls for insurrection. But the foundations of a political realignment are obvious. November showed the pushback is real.

And the supply of oil is running low!

We all know those who do not truly study history – and try to erase it – are bound to repeat it. This is an undeniably American Chanukkah lesson.