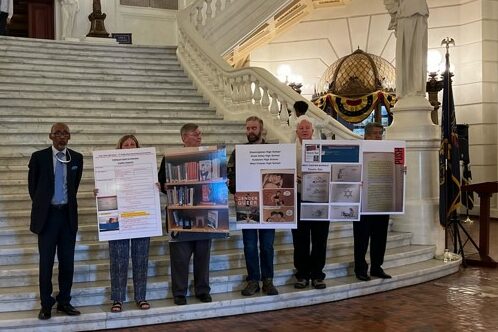 When Fenicia Redman organized a group of Delaware Valley parents to travel to Harrisburg this week and argue that public schools are exposing children to inappropriate content, she didn’t know the state Capitol police would help make her case.

Redman, whose son attends Great Valley High School, supports two bills limiting sexual content in the curriculum and discussions of gender identity. Both advanced out of the state Senate Education Committee this week, She has been leading the charge against sexually explicit content in some school library books.

While at the Capitol, Redman talked with state Rep. Barbara Gleim (R-Carlisle) and state Sen. Doug Mastriano (R-Franklin), garnering support for her cause. She showed them posters of obscene illustrations in school library books available to children.

Books the parents object to include, “Gender Queer,” “All Boys Aren’t Blue,” and “The Complete Idiot’s Guide to Tantric Sex.”

Mastriano, the Republican candidate for governor and member of the education committee, said in a statement the two bills will “empower parents to ensure their children are not exposed to sexually explicit materials and bizarre discussions about gender identity. Just this week, I had a visitor (Redman) to my office who showed me some of the explicit materials found in her child’s school library. It was shocking, to say the least. Schools need to be focused on educating–not indoctrinating–our students. The classroom needs to be a place for learning, not a place for gender theory lessons and grooming.”

SB 1277 requires districts to notify parents about sexually explicit content in the school curriculum and whether their child’s coursework includes that content. SB 1278 would prohibit classroom instruction on gender identity and sexual orientation for pre-kindergarten through 5th-grade students. Both passed the committee on Tuesday and will be taken up by the full Senate.

Redman and other parents who were with her, including a pastor who usually votes Democratic, wanted to show legislators that “this is real. We were out there peacefully…I am a parent, and I have a child who is being victimized by the mere presence of these books in the school library.”

And while Redman’s group was in the Capitol holding signs showing the explicit illustrations in books found in local school libraries, they were ordered by police to take them down. Too graphic.

“Capitol Police Lt. Devlin ordered me to remove the most graphic pictures because someone complained. ‘Children walk these halls,’ he told me.”

“I replied, ‘But these books are in school libraries and—‘”

“‘I don’t care. Get rid of them, or you’re OUT!” he told her. So, she packed up the posters of the obscene book illustrations. As she was walking down the hallway, Redman saw Mastriano’s office and went in and showed his staff the book illustrations and asked what “his position is on the criminal exploitation of our children, of minors in school is.”

The staff member went to a back office and ushered Redman in a minute later.

“And when I showed it to him, his jaw dropped,” she said.

Another senator’s office had an easel with a sign warning against banning books. Redman put one of her illustrations beneath it to juxtapose that message with the pornographic illustrations. 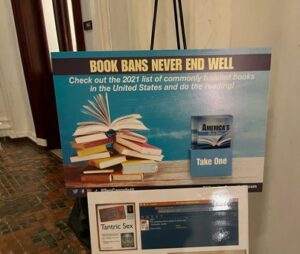 Gleim says she first saw the books with lurid illustrations that she called “pornography” at the Pennsylvania Leadership Conference in March and was surprised they were available in public school libraries. Since then she has been alerting her colleagues in the House, including Speaker Bryan Cutler, about the issue.

“The content is not appropriate,” Gleim said. “We’re working on ways where we can define what is age-appropriate for minors in school libraries.”

And she believes showing this content to minors may also violate federal laws.