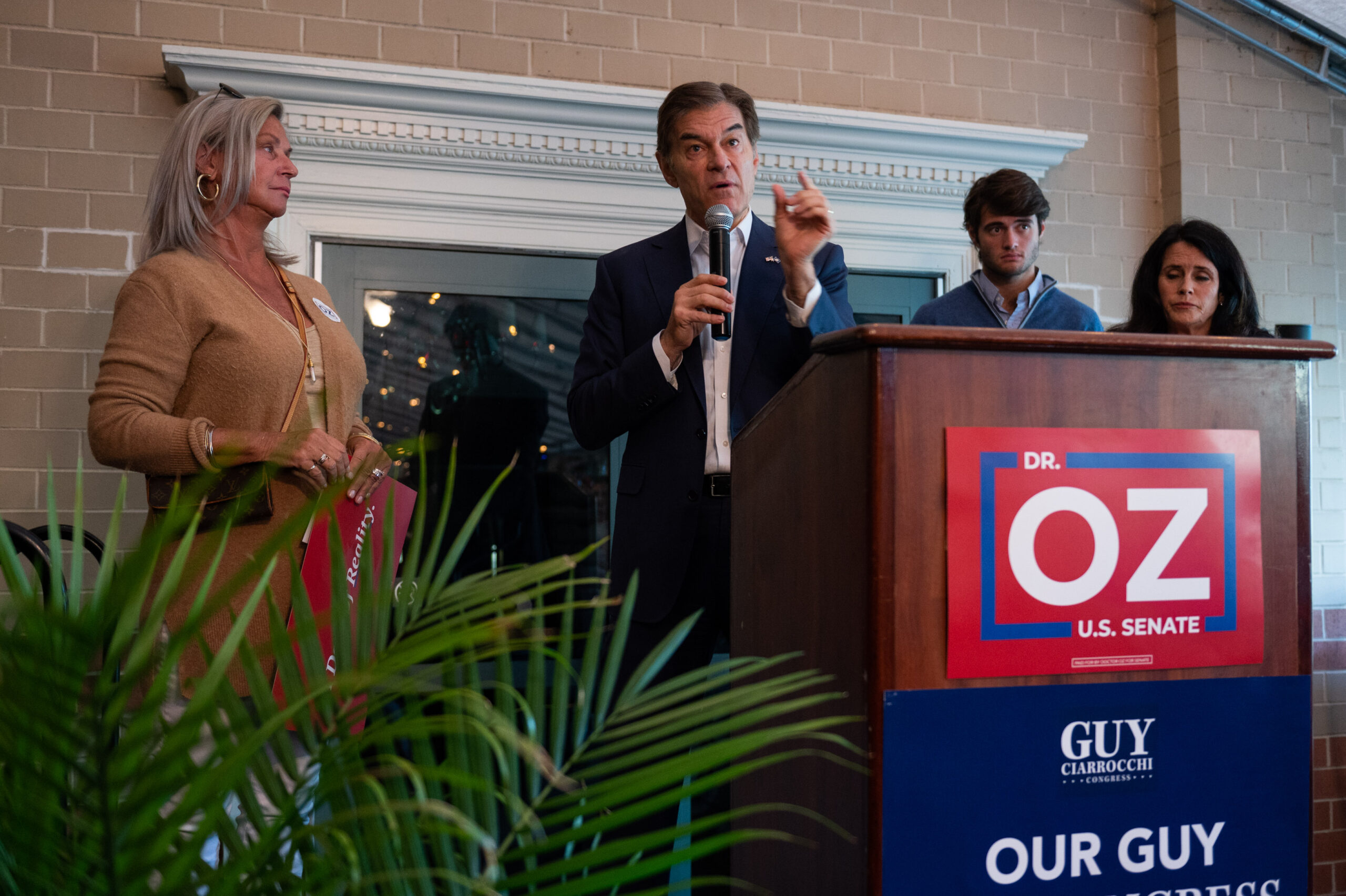 As Senate candidate Dr. Mehmet Oz was speaking during an event at the Desmond Hotel for Chester County Republicans recently, a Tredyffrin woman joined him on stage and spoke about her daughter’s death from fentanyl.

“We live two miles away,” said Leslie Holt. “A criminal came from Philadelphia. He brought meth-3 fentanyl, which is a drug they did not even test on animals. They know the outcome. This criminal drove into this beautiful neighborhood in his Jaguar (and) delivered this poison into our mailbox.”

Her daughter, Lana, 32, was self-medicating for pain from Lyme disease, she said.

“My husband found her the next morning,” she said. “And the criminal that brought this to our home is appealing his sentence. And John Fetterman will be the person who says, ‘Hey, this is fine. Give him another chance.’ He’s only had about 50, mind you, and he’s got a rap sheet two pages long. But he’s appealing.”

Leslie Holt with a picture of her late daughter, Lana

“I can’t even get my daughter’s phone back because it’s evidence,” Holt said. “She worked at the University of Pennsylvania with animals. She had so much promise. And someone poisoned her. And this is happening all throughout Chester County.  And no one is addressing it or talking about it. It’s coming here from Mexico and China.”

Oz said that the influx of fentanyl was caused by “weak, weak leadership at the federal level.”  He promised that he and congressional candidate Guy Ciarrocchi would take steps to stop it if elected.

“We cannot afford to allow a purposeful misdirection of our nation,” said Oz. “I was in Philadelphia at a prayer vigil in Olney for a murder that happened, last year, 561 murders, the worst of any major city. Shocking.”

At the prayer vigil, someone told him it was easier to find Fentanyl than baby formula.

“How could the land of opportunity, the land of plenty, leave people with Fentanyl and no baby formula?”

Oz visited the Kensington area of Philadelphia to get a better idea of the devastation that drugs have brought. And while there, Oz took four addicts who expressed an interest in treatment to a nearby rehabilitation center.

But for Holt, Lana’s death is not just a number.

“Unfortunately, it’s happening more and more frequently,” said Holt. Between her two children, “they’ve easily lost 15 to 20 friends from high school,” she said. “Not to single out Conestoga. These were kids who had been to my home, to sleep overs.”

Holt and her husband, Tim, believe Lana’s death was accidental on her part because she’d been taking what she thought was methadone for her Lyme-related pain. She had been suffering from the effects of Lyme disease for years and also the trauma of being raped by a family friend at the age of 14. Lana kept the rape a secret but that took a psychological toll.

After Lana’s death, Holt “shut down.” But then she decided she had to do something. Previously, Holt and a friend started s nonprofit RADAR to map sexual predators with a map and pin showing where they were assaulted. And Holt started another nonprofit as an off-shoot, A Child’s Light, to pay for therapy for children in Chester County who have been sexually or physically abused. She and Tim also take coats to Kensington to give to homeless addicts on Lana’s behalf. The coats bear tags that say “Love, Lana.”

Tim Holt found his daughter early in the morning of Nov. 2, 2018.  She could not be revived. But the Tredyffrin police used her cell phone to lure her dealer–the guy that delivered the fatal meth-3-fentanyl to their mailbox—to a make another delivery. This time it resulted in the arrest of Ricky Lowe, who drove up in his Jaguar. Lowe was convicted by a Chester County jury and sentenced to 17 to 33 years.

The trial was an ordeal for the Holt family. Lowe’s “crew” came to court and tried to start fights with her son. At one point she called the sheriff for help.

“My husband and son were shattered by Lana’s death,” she said.

So, when she learned about John Fetterman, as lieutenant governor chairing the Board of Pardons and working to pardon convicts, Holt got angry. Like most inmates, Lowe is appealing and the thought of the drug dealer who provided the poison that killed her daughter getting out early motivated her to speak out and to oppose Fetterman’s Senate candidacy.

And Oz has promised to work to stop fentanyl from coming across the border from Mexico. After Oz invited Holt onto the stage, they met privately after the event.

“I really felt as if he heard me,” she said. “I just felt as though he was not a stranger to this issue.”