ROLLINS, ROGERS: Besieged by the Most Left-Wing Democratic Party in History, Americans Must Fight Back 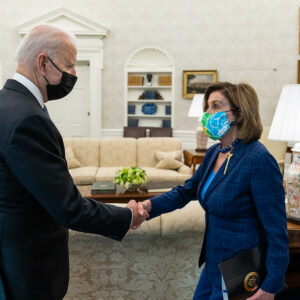 American freedom is under assault. From inept White House leadership to a radical congressional agenda and an emboldened federal bureaucracy, never before have the tenets of America’s founding—life, liberty, and the pursuit of happiness—been so fundamentally besieged by the left.

Let’s be clear: Today’s Democrats, the most left-wing party in U.S. history, are responsible for threatening individual rights. In our many combined decades of watching and working at the highest levels of American politics, we have never seen the nation so divided from within. The current iteration of the Democratic Party is so obsessed with ramming leftist proposals—punctuated by the $1.75 trillion “Build Back Better” tax-and-spend package—down the throats of everyday Americans that they cannot come up for air.

Leadership (or the lack thereof) starts at the top. Months after a botched withdrawal that saw 13 U.S. service members killed by the Taliban, hundreds of Americans remain stranded in Afghanistan. As new details continue to emerge, it is clear that President Joe Biden ignored his military generals, who requested that thousands of American troops remain in the unstable country. Instead, the Biden administration retreated on all fronts, diminishing America’s standing in the world and disheartening our allies. And, still, Biden either defends his actions or dodges the question.

Is it any wonder that our enemies are so emboldened?

Meanwhile, at home, Biden and other Democrats continue to preside over the worst border crisis in two decades. In 2021, U.S. Customs and Border Protection reported nearly two million illegal immigrant encounters—most of them along the U.S.-Mexico border and a whopping 202 percent increase from 2020. Last month alone, CBP reported almost 200,000 illegal immigrant stops—more than double from 2020. The Biden administration is even smuggling underage migrants from Texas to New York and Florida under cover of darkness. And, of course, there are the infamous $450,000 payouts to illegal immigrants.

Throw in the lingering COVID-19 pandemic, which has led Democrats to tread all over the Constitution to impose vaccine mandates on tens of millions of Americans. Levying five- and six-figure fines on private employers, the federal government’s interference in private medical decisions is now the law of the land. “Constitutional” means nothing; only power does.

As Congress debates trillion-dollar spending proposals, debt ceiling suspensions, and a laundry list of middle-class tax hikes, we are seeing a Democratic Party run amok. Inflation is above five percent—the highest in 30 years. Elevated price levels are expected to last well into next year, while millions of Americans refuse to work, content with government handouts that undermine small business job creation.

The “Great Resignation” is widely used to describe the Biden economy. That economy is sputtering, and Democrats are out of ideas. Americans expected “unity” and received recklessness.

Democrats, led by Biden, are failing America domestically and internationally. We are being failed across every level of public policy—from government spending and tax policy to crime and border security. We deserve much better, as do our allies across the world.

However, we can only change the status quo by fighting back in 2022 and 2024. That’s why we have joined forces to launch a new political organization, Restore Our Freedom PAC, that can check the worst impulses of today’s Democratic Party. America must get back to the basics, focusing on the core principles of our American republic.

The “red wave” that swept through Virginia and New Jersey is no coincidence. Americans are starting to fight back. With President Biden’s approval rating in the tank, Americans are beginning to fight for America again. And we applaud them.

Stand up to President Biden and his enablers in power. Keep fighting back—before it’s too late.