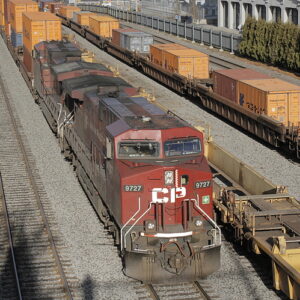 Call it the “NAFTA Super Railway.”

Canadian Pacific (CP)’s acquisition of Kansas City Southern (KCS), combining two class I railroads, would create a mega rail link from the tar sands of western Canada to Vera Cruz on Mexico’s Gulf Coast. The $30 billion plan needs the final approval of the Biden administration’s Surface Transportation Board (STB), which appears to be fast-tracking the deal in the face of growing opposition.

Among the opponents are U.S. rail companies who say the massive merger will hurt competition. They argue such consolidation flies in the face of last year’s executive order from President Joe Biden promoting market competition over conglomeration.

“Robust competition is critical to preserving America’s role as the world’s leading economy,” Biden wrote on July 9, 2021. “Yet over the last several decades, as industries have consolidated, competition has weakened in too many markets, denying Americans the benefits of an open economy and widening racial, income, and wealth inequality.”

Also opposed are communities along the proposed mega-rail project’s path. They fear consolidating two of the largest railroad operators in North America would drastically increase the number of rail cars carrying hazardous materials – including carbon-intensive Canadian tar sands oil and dangerous chemicals – through small towns and major cities across the Midwest.

“According to the application for merger and appendix filed by CP with the STB, train traffic in Bettendorf and the Quad City region will increase over 300 percent,” said Bettendorf, Iowa Mayor Bob Gallagher. “Clearly, this raises safety concerns about access to the businesses and homes between the tracks and the river, possible river rescue operations, potential derailments of trains, issues with hazardous materials being hauled by rail, and possible barge-train collisions.”

Gallagher says the project could also deal a blow to the town’s revitalization efforts on Bettendorf’s riverfront.

“It will impact pedestrian and bicycle use of the nationwide American Discovery Trail and the Mississippi River Trail that intersect in our community, and cause an increase in vibration and noise.”

Mayor Kevin Kernan of nearby Princeton, Iowa is also worried about what the merger could mean for local residents.

“The increased train traffic from the merger will almost certainly elevate the risk of derailments in eastern Iowa, something our communities have already experienced in the recent past,” Kernan said. “The only difference now is that a derailment would create an environmental catastrophe, with all the oil in those train cars.”

In February, eight communities in Illinois banded together against the merger, forming The Coalition to Stop CPKC. The group was created to prevent the merger from occurring, “in support of protecting the quality of life for our children, families, businesses and property owners.”  Concerns cited by the group include the 300 percent increase in freight traffic, train length, quality of life, and safety.

Mitigation measures have been identified, requested, and estimated; costs range between $5.5 and $9.5 billion. Already they have expanded, adding a ninth community – Elgin County – to the coalition.

“The Coalition to Stop CPKC will do everything we can to prevent this merger from occurring in order to do what is best for each of our communities,” according to their website.

Canadian Pacific has rebutted those complaints. It argues CP has been a good neighbor and is committed to open dialogue with impacted communities to convey the benefits of the merger. Community Relations Manager at CP, Andy Cummings, recently published a piece declaring the merger will actually bring economic, environmental and public benefits to those communities.

“CPKC will become the backbone connecting our customers to new markets, enhancing competition in the U.S. rail network, and driving economic growth while delivering significant environmental benefits,” says Keith Creel, CP President and Chief Executive Officer on FutureOfFreight.com, a website created by the rail companies. “We are excited to reach this milestone on the path toward creating this unique truly North American railroad.”

“During 2021, in the midst of a pandemic, this stretch of space held 135 individual events that collectively had an attendance of over 410,000 visitors,” Spiegel told The Quad-City Times. “The city is deeply concerned that the proposed increased train traffic that occurs within a few feet of many of these events will turn this vibrant, community gathering space into something that is unsafe, less attractive, and frequently inaccessible.”

Industry peers Norfolk Southern, BNSF Railway, Canadian National, and Union Pacific all offered criticism to varying degrees. Concerns have also been raised by groups as varied as the U.S. wheat industry and the Federal Maritime Commission (FMC).over the deal’s impact on American competitiveness vis-à-vis Canadian goods and ports. The worry is that Canadian government subsidies, coupled with the new Canadian-based mega-railroad, threaten the long-term economic health of industries and ports vital to American national security and prosperity.

The STB is expected to release the draft Environmental Impact Statement (EIS) on the deal this spring. A round of additional public hearings on the proposed merger will follow.

Gallagher says the Bettendorf community will be watching closely.

“(We’re) hoping to work together collectively to alleviate the impact of this potential merger to our community.”