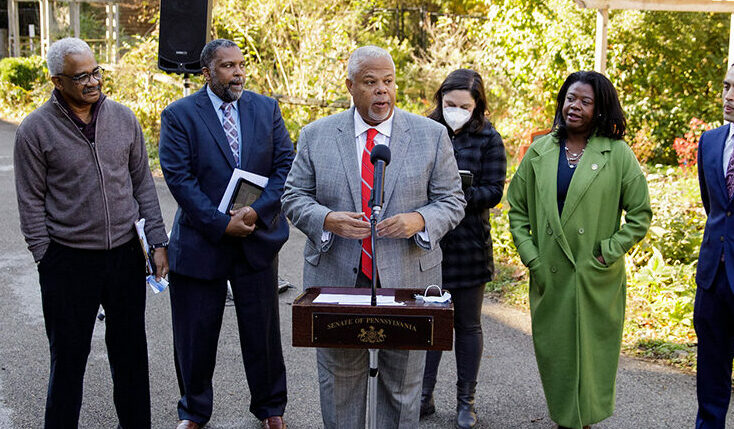 Is Pennsylvania’s Democratic establishment in for a rude a-“woke”-ening?

Although the state legislature is controlled by Republicans, left-wing candidates are targeting Democratic incumbents in some Delaware Valley districts, arguing those Democrats are not progressive enough. Races that once attracted relatively little competition are heating up.

Political newcomer and schoolteacher Paul Prescod is squaring off against state Sen. Anthony Hardy Williams in the 8th Senate District. Tarik Khan, a nurse, is challenging state Rep. Pam DeLissio in the 194th House District. Those districts include parts of Delaware and Montgomery Counties, as well as Philadelphia.

First-time candidates Prescod and Khan have been involved with far-left activist groups like the Democratic Socialists of America and Reclaim Philly. They’re hoping to follow the path of progressives like state Sen. Nikil Saval and state Rep. Chris Rabb, who defeated more moderate and establishment candidates.

Prescod, who is likely to portray his opponent as a moderate, “centrist” Democrat, is a Temple graduate and has taught in Philadelphia’s public school system for the last five years. He will likely hammer away at Williams’ support for charter schools and private school voucher programs.

Williams’ previous acceptance of donations from groups backing charter schools has been described as “monolithic” and could make for campaign fodder for left-leaning voters. In a recent interview with the Delaware Valley Journal, Prescod painted a grim portrait of deteriorating conditions inside some of the schools where he and colleagues teach, noting issues with mold, asbestos, and rodents.

“The buildings aren’t fit for human beings. We need more people who come out of ordinary backgrounds,” the 30-year-old Prescod said. “We need a change in leadership and, really, a big change in direction.”

Incumbent Williams, who has a family history of public service — he took over his father’s seats in both the state House and Senate — expected attacks on his stance on charter schools. And he rejects the notion that he’s somehow not left-leaning enough for his district.

He said he’s championed progressive causes like police accountability and systemic racism for years. But now newcomers from the left tout them “like they just discovered Plymouth Rock,” Williams, who says he has helped groom a generation of younger politicians, noting he has largely bucked the party-machine structure while in office.

Prescod isn’t backing off. He hopes to garner support from progressive groups and has already landed endorsements from three labor unions. And he said his “bread and butter” campaign has lined up more than 600 donations so far. Prescod is eager to test whether Williams’ base is really as big and as strong as believed.

“I really try to focus on issues that have broad support. Actually making material improvements to a majority of people’s lives, that’s really what it comes down to. I think there’s been a lot of hunger for change,” he said, citing other progressives’ wins. “It’s been the same person or the same family for so long.”

Williams is proud of his family roots but stresses he has earned his way. He points to his track record and the lack of competition in previous primaries as showing he is doing a solid job for constituents.

”My [staying power] has always been consistency,” Williams said. “It’s not just say something, it’s doing something.”

In the 194th House District race, incumbent DeLissio is being challenged by Khan, a nurse and Reclaim member. The district includes parts of Northwest Philadelphia and Montgomery County, which DeLissio has represented since being first elected in 2010.

Over the years, people announced they were primarying DeLissio only to later withdraw. Barring unforeseen changes, this is the first time she will have faced an interparty challenger since 2016 when she handily defeated Sean Stevens with more than three-quarters of the vote.

“I’m doing my job as I always do my job whether there’s a challenger or not,” DeLissio told DVJournal Wednesday.

The 42-year-old political neophyte Khan said his experiences helping vulnerable and underserved people as a nurse during the COVID-19 pandemic made him feel like the district needs a “healthcare champion in the House.” He recalled the “fear in the eyes” of first responders who came for coronavirus tests at Citizens Bank Park last year, in the early months of the pandemic. Later, he spent his days off delivering vaccinations to homebound patients.

Progressivism means “actually getting things done and fighting for issues that are central to our future,” he said.

“If I didn’t feel like I would be a better leader, I wouldn’t have run,” Khan said. “A lot of it’s showing up and listening to people.”

DeLisso says she believes the hundreds of town hall meetings she has held during her time in office are the “cornerstones” of being an effective leader and having an informed electorate.

“My goal isn’t to make your eyes glaze over. It’s to acknowledge their power,” she said. “If that isn’t the most progressive approach to governing, I don’t know what is.”

DeLissio also touts her ability to reach across an increasingly hostile aisle in this fractious divisive climate, knowing sometimes she’ll get slammed by those who adhere to party lines.

“If we don’t do that, what happens in that void is unthinkable,” she said. “What we’ll have is two extreme sides. They’ll be loud, but it won’t be effective. The alternative is very scary.”