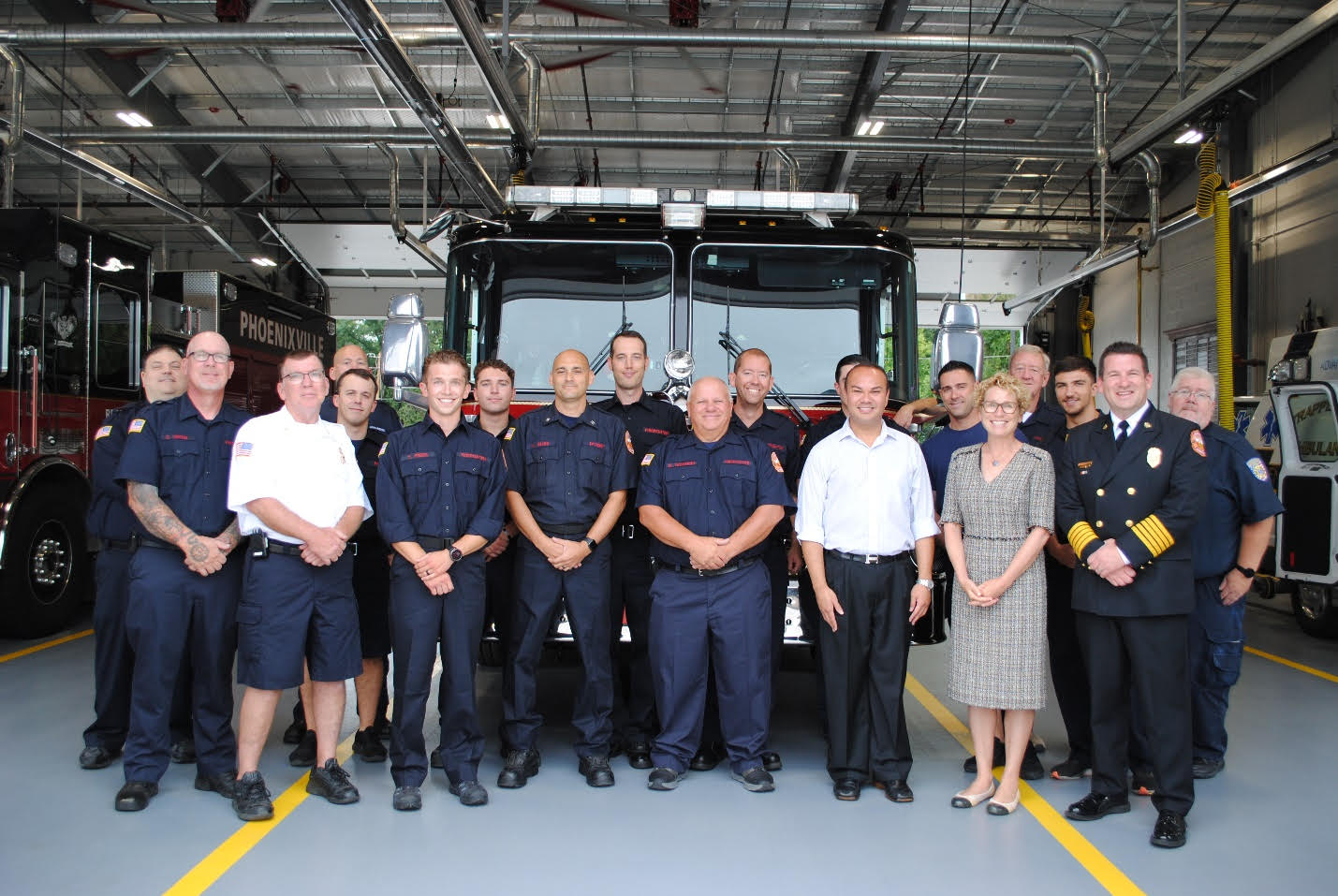 This week, Rep. Chrissy Houlahan (D-Chester) and Phoenixville Mayor Peter Urscheler gathered at the new Phoenixville Fire Station with nearly 50 first responders and community leaders in reflection of Hurricane Ida’s destruction one year ago this week.

Wednesday’s visit included remarks from both Houlahan and Urscheler, as well as a local resident who lost everything in the flooding, Fire Chief Eamon Brazunas, Tamela Luce of the Phoenixville Community Health Foundation (PCHF), Karin Williams of the Office of Emergency Management (OEM), and Reverend Peter Paprowski of the Holy Ghost Church. Following remarks, attendees gathered for a discussion on the FEMA application process and then concluded with a tour of the new fire station.

“I will never forget seeing the destruction of the floodwaters in Phoenixville the morning after Hurricane Ida struck,” said Houlahan. “As we walked through the community, an officer shared with me that it was the toughest day he’s had on the job in his 25 years of service—that tells you something about how our first responders were impacted.

“I am constantly reminded of how community-oriented we are here in southeastern Pennsylvania, but yesterday especially as we gathered representatives from all levels of government and facets of our community, including nonprofits, schools, health care providers and more. The takeaway was clear: we are only as strong as how well we support one another, and here in our community we could not be more engaged and supportive. As many others shared, I’m so proud to call this place home,” she said.

In the wake of Hurricane Ida, Houlahan urged President Biden to swiftly declare a federal state of emergency so federal resources could be made available to impacted areas.

“It’s amazing when I look back, a year later, on the terrible devastation caused by Hurricane Ida,” said Urscheler. “But, more so, when I remember all the large and small things that so many people did to help each other to recover and get their lives back. While Hurricane Ida was the most destructive storm we have experienced in our area since Hurricane Agnes in 1972, it was no match for the strength and resilience of the people of this community.

“We are so blessed that no local lives were lost during those horrifying hours. And we are doubly blessed to know that we live in a community where, when the unthinkable occurs, neighbors quickly spring into action to help neighbors. We are so grateful to all of our first responders, our fire department, police, sanitation workers, office of emergency management, community members, volunteers, and our elected officials. And I am so grateful, that the morning after Hurricane Ida, Representative Houlahan was there, seeing the devastation for herself, so she could take our community needs directly to the federal government so everyone could get their lives back on track as quickly as possible,” he said.

“The volunteers and staff of the Phoenixville Fire Department responded to numerous emergencies throughout the Borough of Phoenixville and surrounding communities during and in the aftermath of Hurricane Ida,” said Phoenixville Fire Chief Eamon Brazunas. “The investment in training and equipping our personnel to properly deal with water rescue incidents paid off as no lives were lost during this devastating storm. Water rescue response preparedness will continue to be a high priority for the department.”

In the first week of September 2021, historic flooding caused by Hurricane Ida left a path of destruction throughout the region. Local emergency responders rescued 195 people, many from their vehicles or from the roofs of their homes. An estimated 80 cars were under water. After the storm, over 537 residents from Chester and Montgomery Counties were left homeless and living in hotels.

“Hurricane Ida was devastating to our community and surrounding neighbors,” said Police Chief Brian Marshall. “Days prior to the storm approaching Phoenixville, all of our emergency responders hoped for the best and prepared for the worst. I’m extremely proud of our fire department’s efforts and commitment to saving lives and rescuing victims from their homes and vehicles during the storm’s water surge.

“Our EOC Coordinator, Karin Williams, worked unthinkable hours to help not only Phoenixville but also our neighbors to the east in Upper Providence as well. Swift water rescue is a skill set that police departments do not possess. However, we supported the humanitarian efforts afterwards by delivering food, cleaning products and extra patrol to surrounding areas,” he said.

Williams of the Office of Emergency Management spoke about the preparations made ahead of Hurricane Ida and actions taken in the aftermath.

“As an emergency manager, you are often tasked with looking at emergencies from the ‘big picture’ and then need to break down the process of preparedness, response, recovery and mitigation,” said Williams. “Based on the weather reports from that night in 2021 none of us could have been truly prepared for the devastation that occurred overnight, while most people were in bed. I am so grateful to the Phoenixville Community, how they sprung into action.

“Our school district opened its doors as an emergency shelter in conjunction with the National Guard, our non-profits began cooking for first responders, and after clean up in the Borough was well underway, our residents began walking across the bridge to help our neighbors in Mont Clare and Port Providence. I will always be inspired by not only our community’s immediate response but also the sustained efforts that went on for close to a year, which helped everyone in our region get back on their feet,” she said.

“In only about two months, 54 homeowners received up to $10,000 each to ensure their electrical, heating, and water systems were once again working properly. It is thanks to the interconnectedness of the Phoenixville nonprofit community that we were able to mobilize and distribute funding as quickly as we did. When our neighbors need help, Phoenixville is there,” Luce said.