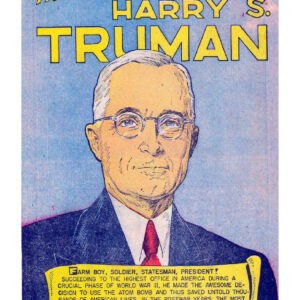 It’s a fundamental fact: You can’t take gimmicks out of presidential politics. Because like it or not, gimmicks work.

One of the all-time greats was in 1840. A newspaper snidely editorialized about William Henry Harrison, “Give him a barrel of hard cider, and … a pension of two thousand [dollars] a year … and he will sit the remainder of his days in his log cabin.”

Democrats pounced on a golden opportunity to rebrand the slightly aristocratic Harrison as a sort of frontier Everyman. They featured log cabins at their rallies and passed out hard apple cider drinks by the barrelful—though later generations eventually took a dim view of using alcohol as a vote-getter. It was enough to propel Harrison to a narrow victory.

Some 100 years later, another president was in serious political trouble. Maybe Democratic strategists remembered the log cabin campaign as they desperately fished for ideas to save Harry Truman’s floundering presidency. Because his reelection prospects were pegged somewhere between slim to none.

He had inherited the job when Franklin Roosevelt died. With the Cold War raging in Europe and countless headaches at home as the U.S. made the painful transition from wartime back to a peacetime economy, it seemed everyone was mad about something. And they all dumped their anger at Truman’s feet.

When the 1948 election rolled around, Truman’s Democratic Party fractured. The left didn’t think he was liberal enough and deserted to support former Vice President Henry Wallace’s Progressives. The right thought he was too liberal and went over to South Carolina Gov. Strom Thurmond’s Dixiecrats. On top of all that, New York’s popular Republican Gov. Tom Dewey was circling the White House the way sharks circle a sinking ship.

Desperate times call for desperate measures, they say. With almost no money and little left to lose, Truman famously campaigned by train from one end of the country to another. Too broke to rent big city auditoriums, he spoke from the back of a railroad car at dozens upon dozens of small towns from one end of the country to the other in his famous “Whistlestop Campaign.”

But the Democrats also did something else that, although equally revolutionary, is seldom remembered today.

They issued a campaign comic book.

No, seriously, they did.

America was experiencing what collectors now call the Golden Age of Comics just then. Comic heroes had joined the war effort during World War II, supporting the Allied cause so exuberantly that one even showed Captain America punching Adolf Hitler in the face. So, the Democratic National Committee tried to harness that appeal in its quest for votes. And it bet big on the idea.

Three million copies of “The Story of Harry S. Truman” were released in October 1948, just as the country’s attention was focusing on the upcoming election. Its 16 brightly-colored pages recounted Harry’s improbable rise from the small, whitewashed house in Lamar, Mo. where he was born in 1884 to his arrival at the White House in 1945.

Although the artwork is credited to M.W. Ater, we don’t know who wrote it. It’s possible the author wanted to keep his name out of sight. Because those 16 pages are filled with such dialogue gems as, “Y’know, that boy Harry sure plows a straight furrow.” “Yep. The straightest in the county!” Here’s another: “Bess, the boys at the Legion meeting tonight were talking about having me run for county judge… as a Democrat!” You get the idea.

Great literature, it wasn’t. But if you think this comic book was intended for children, think again. Remember, the minimum voting age in 1948 was 21. (It wouldn’t be lowered to 18 until 1971.) Nowhere does the comic say, “Hey Kids! Be sure to show this to your mom and dad and tell them to vote for Uncle Harry on November 2!”

This was a direct appeal to everyday Americans who didn’t read The New York Times. Simplistic, yes; but it also talked to them in words they understood with a message that was impossible to miss. Harry Truman, the one-time farmer turned war veteran turned failed small business owner turned local politician, had reached the very top. He knew what their lives were like because he was one of them. And they could always count on him to look out for them.

When the votes were counted that first Tuesday night in November 1948, Harry Truman had pulled off the greatest political comeback of the 20th century. It was close, but a win is a win.

And a now-forgotten funny book printed on cheap pulp paper had quietly helped make it happen. 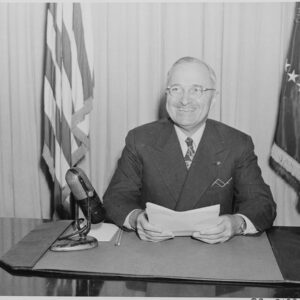 You’ve just wrapped up the most demanding job on earth. You used the atomic bomb, transitioned the economy from war footing to peacetime, helped create the United Nations, and stood up to communist aggression in Korea. So, what do you do next?

Take a road trip, of course.

To appreciate this story fully, you must first understand that except for being a politician, Harry Truman was one of us: A down-to-earth, middle-class guy who struggled to pay his bills, cherished his wife and daughter, and even enjoyed a snort of good Kentucky bourbon and a friendly game of poker.

He’d grown up seeing the original horseless carriages chugging down country roads. His first car was a 1911 Stafford, handmade in Kansas City, one of only 350 autos the company produced that he bought used in 1916.

Over the years, Harry developed a thing for Chryslers. The folks at the Chrysler Corp. heard about his remarkable loyalty and gave him a brand-new 1953 Chrysler New Yorker in appreciation. (Believing even a former president shouldn’t be beholden to big business, Harry insisted on paying $1 for it so it wouldn’t be a gift.)

That big, shiny black car had Harry itching to hit the road, and he knew just how to persuade his wife, Bess, to go with him. They could visit their daughter, Margaret, in New York City.

Up at his usual 5:30 a.m. on Friday, June 19, 1953, Harry loaded 11 suitcases into the trunk, planted Bess in the passenger seat, and headed east. No Secret Service agents were tagging along. Just a former president, a former first lady, a full tank of gas, and highway maps in the glove compartment.

They were like any married couple on the road. Harry had a lead foot, Bess scolded him to slow down, and he silently fumed. (It must have been hard for a guy who had negotiated with Churchill and Stalin to have the Mrs. constantly reminding him to lay off the gas pedal.)

The first stop was a diner in Hannibal, Missouri, where they had fruit plates and iced tea. Congress wouldn’t grant former presidents a pension for several years, so Harry had to count pennies. They were no-frills travelers anyway; they splurged on a $5 room in the Motel Parkview in Decatur, Ill.

Ever spend the night with friends while traveling? So did the Trumans. Young Claire McKinney tried to tiptoe unnoticed into her family’s Indianapolis home late one night, only to find Harry playing the family piano in the living room.

Harry and Bess went whole hog at the Princess Restaurant in Frostburg, Md., —two chicken dinners for $1.40, plus tip. When word got out that the former president was eating there (a plaque now marks the booth where they sat) the Princess quickly filled up. Harry later said, “I had been there before, but in those days they didn’t make such a fuss over me. I was just a senator then.”

Stopping later at a gas station for a fill-up and a Coke, the owner asked him to give his mechanic a hard time for being a Republican. Harry’s response: “It’s too hot to give anybody hell.”

His return visit to Washington was a triumph. But it was nothing compared to the Trumans’ time in the Big Apple, where they painted the town red. A suite at the Waldorf Towers, two Broadway shows, even dinner at the trendy nightclub 21, where the maître d’hôtel pulled off a geographic miracle by seating them far away from Gov. Thomas Dewey, the man Truman had kept out of the White House in the famous 1948 presidential upset.

The trip’s highlight came on the Pennsylvania Turnpike during the drive home. Harry was — for once — obeying Bess’ scolding and driving 55 miles per hour, her preferred rate of speed. The problem was the turnpike’s speed limit was higher and Harry’s poking along in the left lane delayed cars behind him.

Pennsylvania State Trooper Manley Stampler pulled alongside Harry and motioned him to pull over. Imagine Stampler’s shock when he saw who was behind the wheel. Here’s how he recalled it: “I told him what he had done wrong and he said he didn’t realize it — that it wasn’t intentional. He was very nice about it and promised to be more careful.” Bess chimed in, “Don’t worry, trooper, I’ll watch him.”

Stampler added that the two-minute encounter “seemed to last a long time.” Harry shrugged it off, claiming the trooper had pulled him over only to shake hands.

Nineteen days and 2,500 miles later, the trip ended where it began. Once again, Harry unloaded all 11 suitcases himself.

This story sounds charming because it is totally impossible today. Can you imagine any living ex-president answering the call of the open road, free to go wherever the four winds happened to blow them? In this Age of Terrorism, could they do it even if they wanted to?

A final note: Author Matthew Algeo (to whom we all owe a debt of gratitude for uncovering details about this remarkable trip), eventually tracked down Harry’s 1953 New Yorker. After trading it in for a new Chrysler in 1955, it changed hands several times. A Kansas farmer bought it in the 1970s. It sat outdoors for 25 years and wound up in a barn in 1998.

At last word it still sits there rusting in silent obscurity, a reminder of a different time, and a different type of president, we’ll likely never see again.