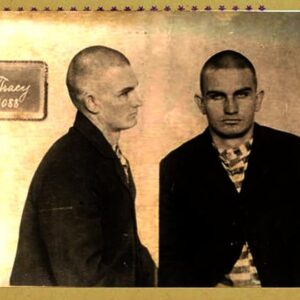 Tracy was a walking bundle of contradictions. Strikingly handsome with an Abercrombie & Fitch model’s disdainful smirk, he could be excessively polite. Women adored him, and he revered them as symbols of Victorian purity. He was charming company, even funny when he wanted to be.

He could also be withdrawn, lonely, and moody. He was savagely dangerous and deadly with a gun. Harry had bad luck and made bad choices, and even when he tried to do the right thing, he got a bad break.

Born Harry Severns in Pittsville, Wisc. in 1875, there are dark hints the boy was physically abused. By 16, Harry couldn’t take it anymore. He was already a crack shot, bitter, and deeply in love.

Harry desperately wanted to marry sweetheart Eugenie Carter and start a new life. But that took money. So, he robbed a post office of $160. He was kissing Eugenie goodbye when the sheriff opened fire, becoming the first man Harry sent to his grave.

There was no going back now. Harry was an outlaw.

He turned up in Missouri with the acquired surname Tracy. Hiding in an Ozarks shack, he forced two men identified as “bums” to help him rob eight hunters of $750.

He bounced around out West, hoping to reunite with his beloved Eugenie. Harry recognized the importance of having money–he just wasn’t willing to work for it. A dangerous pattern developed. His version of going to an ATM was pulling an armed robbery and living off the loot until the cash ran out. Then he robbed again. And again.

In Salt Lake City, a holdup went bad, and he was sent to prison. But Harry outfoxed his guards, slipped away, and started over in Colorado.

In 1894 (at age 19, mind you), a Colorado Springs saloon holdup was bungled; two lawmen were killed as he fled. The next stop was Montana, where he joined a gang of horse and cattle thieves. The leader got drunk and beat his Native-American wife. That deeply offended Harry, who ended the beatings by putting a bullet through the abusive husband’s head.

Harry dropped out of sight after that, roaming the West and brooding over Eugenie.

Then, a miracle happened: Out of the blue, he ran into her in Cripple Creek, Colo. They married. Harry seemed genuinely interested in turning over a new leaf. He bought a little ranch in Idaho and for a few months, the newlyweds were blissfully happy.

But Fate was determined to never let Harry stay happy for long.

Two friends accused of stealing horses hid out at Harry’s ranch. A posse surrounded the place.

For once, Harry had no part in the crime. He and Eugenie decided to flee. The posse opened fire when they ran. Eugenie was hit. Harry went berserk and started shooting like a madman, killing three posse members, and sending the rest running for their lives.

Harry held Eugenie in his arms as she died, gently placed her body on their bed, and rode off into the night. His one sincere attempt at going straight had ended in bloody failure.

If Harry was bad before, he was worse now. He particularly blamed lawmen for his woes.

After a few years of riding and robbing, he eventually reached the Pacific Northwest and fell in with fellow bad guy David Merrill. They committed one hold up after another until they were caught and hustled off to Oregon’s penitentiary.

A buddy smuggled two rifles into the prison. They made their break on June 9, 1902. Harry shot one guard and used another as a human shield. In all, three guards and three civilians were shot dead.

With that, the greatest manhunt in Pacific Northwest history was underway. It was front-page news nationally.

July 3: The Seattle Daily Times reported, “In all the criminal lore of the country there is no record equal to that of Harry Tracy. Jesse James, compared with Tracy, was a Sunday school teacher.”

July 4: It was said Harry killed two officers and mortally wounded two others near Seattle.

July 8: Harry reportedly held up six men near Olympia and confessed to killing Merrill after a disagreement.

Harry would drop from sight, then show up hungry at some farmer’s door demanding food and lodging at gunpoint. Incredibly, some hostages said he was pleasant, cheerful, even good company.

And yet, he also murdered at least five men while on the run. The public was nearing panic mode. Washington and Idaho’s governors offered $6,000 in reward money, dead or alive.

His luck finally ran out on August 6, 1902, when he was cornered near Creston, Wash., and shot in the leg. Surrounded, Harry committed suicide.

It was over. After murdering an estimated 25 men (mostly law officers), committing some 43 robberies, and making at least six jailbreaks Harry Tracy, the Old West’s last outlaw, was dead at age 27.

His body was publicly displayed, there was a prolonged, nasty fight over the reward money (which dwindled to $2,500 when it was reluctantly paid), and Harry faded into the mist of time.

He is known today only to hardcore history buffs, a psychopath who brought misery everywhere he went while suffering his own inner torment every step of the way.