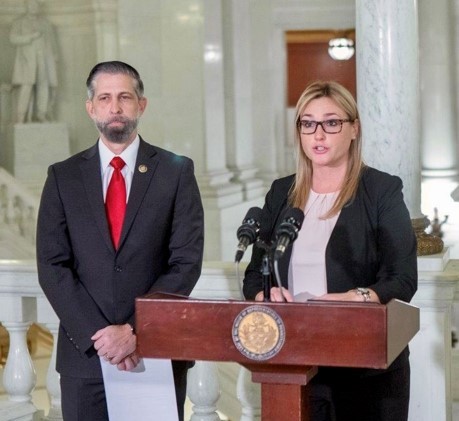 Delaware County state Rep. Craig Williams (R-Chadds Ford) says Attorney General Josh Shapiro has been a no-show in the fight against Philadelphia’s surging violent crime, and he says that needs to change.

“Attorney General Josh Shapiro has routinely blamed the General Assembly for violence in Philadelphia,” Williams said during a press conference outside the Attorney General’s Office. “Yet when given authority to prosecute gun crime in Philadelphia, he said expressly he would not use it. We intend to give him another chance to pitch into the fight.”

In 2021, Philadelphia recorded 562 homicides and 2,332 shootings. The highest previous year was 500 homicides in 1990. And the murder rate in 2022 is already on pace to eclipse last year’s record high. Additionally, gunpoint carjackings have nearly tripled since 2019, with more than 100 already in 2022. Even a congresswoman was a carjacking victim.

White said during a Tuesday press conference outside the Attorney General’s Office, unfortunately, Shapiro has yet to use the law a single time to get a criminal off Pennsylvania streets.

“Even though the murder rate in Philadelphia rose to record levels, Attorney General Josh Shapiro refused to use this new tool to help us fight crime in Philadelphia,” White said. “Nonetheless, we’re extending the law to give Shapiro a second chance to do what is right as gun crime continues to rise. It’s clear the state must step in to protect the people of Philadelphia from their irresponsible district attorney, Larry Krasner, and that person is the attorney general of Pennsylvania.”

“Philadelphia District Attorney Larry Krasner is an ineffective prosecutor, who has refused to fully prosecute many offenses,” White said. “What is of grave concern though, is his refusal to prosecute our state’s most serious crimes, which he has left a trail of murder victims and devastated communities. Our brave law enforcement officers are out there every day doing absolutely everything that they can to arrest these criminals and protect our communities.

“As state officials, we have a responsibility to oversee public safety in our cities and counties. When local officials refuse to act, we must,” she said.

Williams, a former federal prosecutor, said $1.5 million in funding he secured to hire more gun prosecutors in Philadelphia and Delaware Counties, has now come online. The money will flow to the Project Safe Neighborhoods program, which deputizes those local prosecutors as federal prosecutors, who will bring the weight of federal statutes on felons who are not permitted to have a gun. Federal sentences are longer and there is no probation, he noted.

“We appreciate the trust our office has earned from the General Assembly for expanding our fight against gun violence to keep Pennsylvanians safe,” said Shapiro, in a statement. “This proposal is a fake solution to a very real problem in Philadelphia, put forth with no input from our office. There are meaningful steps to be taken – but everyone needs to be serious and get to work.”

“The General Assembly should stop passing the buck and act. Close the ghost gun loophole that is fueling violence and putting guns in the hands of criminals. Pass mandatory bail reform for gun crimes so these criminals aren’t back out on our streets the very next day. And help cities fill hundreds of police officer vacancies and expand services. These steps would actually help reduce violence – not this finger-pointing.”

In the meantime, the Gun Violence Task Force, with cross-designated prosecutors, has prosecuted four cases in 2019, 24 in 2020, and 38 in 2021, the Attorney General’s Office said.  There were 571 ghost guns recovered in Philadelphia in 2021, up 128 percent from 2020 and up 489 percent from 2019. Ghost guns are weapons that are homemade and untraceable. Nearly 10 percent of firearms found by the Philadelphia Police Department are ghost guns.

Shapiro noted he has Strategic Response teams in place, working with the Philadelphia police,  in West Philadelphia and Kensington.

Krasner spokeswoman Jane Roh did not respond to Delaware Valley Journal’s request for comment. However, she told PennLive that White and Williams’ news conference was a “comically timed stunt” held on the same day the Republican majority in the state Senate was scheduled to vote on a bill to block Philadelphia and other local governments from “enacting life-saving gun restrictions because these same lawmakers will not.”

However, White and Williams said they are giving the attorney general another chance to buy into Act 58 in the wake of the record number of homicides in the city.

“So, we’re putting the ball on a tee for him again,” said Williams.

“When there is no cooperation, people lose their lives,” White said. “That’s why we must extend this law and demand Attorney General Josh Shapiro prosecute the law the way District Attorney Larry Krasner will not. Lives depend on it.”

He “welcomes any and every resource to stop gun violence in Delaware County. Our office was only notified that grant funding for this program was available in the last week; we have however, immediately taken steps to seek County Council’s approval to accept the grant at its first meeting in February. It’s important to note that while adding several federal prosecutors to the US Attorney’s Office to handle gun cases will no doubt affect the problem of gun violence in our region, it is no panacea.  For example, (the DA) has already instituted, without federal resources, a focused deterrence strategy in the City of Chester that has led to a 44 percent reduction in incidents of gun violence during 2021,” said Maggie McAboy, a spokeswoman.