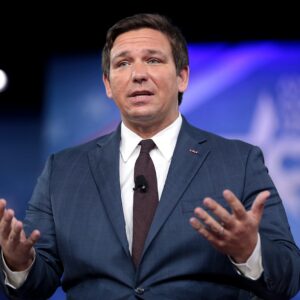 A “draft Ron DeSantis” committee filed a lawsuit against the Federal Election Commission on Thursday, saying it has “taken federal campaign finance law to an unconstitutional extreme” by treating a signed political petition as a campaign contribution.

On Sept. 28, the six-member FEC, which regulates federal campaign finance, rejected a request by Ready for Ron to share its list of those who signed the petition for DeSantis to run for president — along with their contact information — with DeSantis.

The lawsuit was filed by Republican campaign finance attorney Dan Backer and Ready for Ron chief legal counsel Lilian Rodriguez-Baz in the District Court for the District of Columbia.

Polls consistently show DeSantis — seeking re-election as Florida governor this year — is the leading GOP candidate for president in 2024 if former President Donald Trump does not run. Some polls have shown DeSantis competitive with Trump in a Republican primary.

Backer said Ready for Ron is building toward 100,000 petition signers, who provided contact information such as phone numbers and email addresses.

“I am bullish on this case,” Backer said. “We hope to have a hearing and decision by the end of the year to move as quickly as possible.”

Backer said his case is simple: Sharing a list isn’t a political contribution.

“If RFR (Ready for Ron) could organize tens of thousands of people to join together outside of Governor DeSantis’ window to croon for his candidacy, they have the right to do so through a signed petition,” the complaint says. “Speech does not become a contribution simply because it is embodied in written form. Independently, another reason the signed petition is not a contribution is because it does not constitute a ‘thing of value.’”

And, added Backer, binding D.C. Circuit Court of Appeals precedent allows for sharing lists, and past FEC advisory opinions have approved the transfer of contact information from one political committee to another.

Ready for Ron is not affiliated with DeSantis or the DeSantis re-election campaign for governor. The group is a hybrid political action committee and draft campaign formed in May.

Soon after forming the committee, Backer sought an FEC advisory opinion to share its list of petition signers with DeSantis to encourage him to run for president and possibly use the list of supporters if he announces his candidacy.

The FEC opinion argued that even being asked to consider running for office could constitute “testing the waters.”

“The Commission concludes that R4R may not provide the names and contact information to Gov. DeSantis if he either becomes a federal candidate or begins testing the waters for a potential federal candidacy because the value of that information would exceed applicable contribution limits and limits on funds used to test the waters,” the FEC opinion from Sept. 28 says.

R4R countered that other political committees like the pro-Democratic ActBlue and pro-Republican WinRed routinely share the list of contributors with campaigns. And, Backer notes, the names of petition signers are not donors.