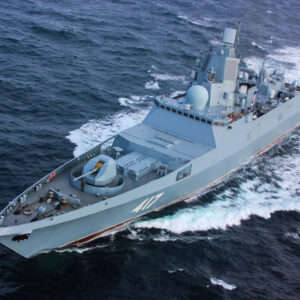 As the ground war in Ukraine’s Donbas region likely bogs down into a contest of prolonged attrition, access to the Black Sea will be key to which belligerent outlasts the other. Before the invasion, over 70 percent of Ukraine’s exports left via its ports. So eventually lifting Russia’s blockade will be critical to securing its economic future and sovereignty.

In recent days, Russia completed its conquest of Mariupol, sweeping clear Ukraine’s access to the Sea of Azov. That leaves Odessa as the last major Ukrainian port with access to the Black Sea, but its sea approaches are blocked by Russia’s navy. Since the invasion began, the city has been the target of sustained missile attacks, and while the threat of invasion is lesser now, it is not zero.

Meanwhile, an avoidable global food crisis has been brewing for months as critical exports of grains and fertilizers have been cut off. Together, Russia and Ukraine supply 30 percent of the world’s wheat, 60 percent of its sunflower oil, and 20 percent of its corn via the Black Sea. The potential for famine in poorer nations reliant on these exports is spurring new urgency to end the war.

While the potential for a food crisis was predictable and noted months before, it has only recently gained serious attention. In the past week, U.N. Secretary-General Antonio Guterres has pursued a deal to open grain shipments from the Black Sea. However, Russia has other options for getting its exports to market and has not been in any hurry to relent in its blockade—yet.

Barring some diplomatic agreement to allow shipping to resume from Odessa in order to end Russia’s naval blockade, the cost for Russia to sustain it must be raised. Already Ukraine’s navy has demonstrated its ability to sink Russian naval vessels, most notably with the use of Neptune land-based anti-ship cruise missiles to sink the Moskva, Russia’s Black Sea flagship. That success has led to calls for supplying Ukraine with similar modern Western weapons.

To that end, allies United Kingdom and Denmark have signaled they have or will deliver the Harpoon anti-ship missile to Ukraine. While such weapons help to raise the cost for Russia, they don’t remove the threat. Russian submarines are increasingly launching cruise missile attacks and can easily shift to attacking shipping in the Black Sea without being threatened by these missiles. Something else is needed for this sort of threat.

Should attacking Russia’s surface warships not raise the costs high enough, neutralizing its Black Sea submarines might be required. Given Russia’s primary control of the airspace and the fact that Ukraine does not have a capable anti-submarine force, this will be a tall order.

That said, the time may be right to dust off past recommendations to modify the Anti-Submarine Rocket (ASROC) for shore launch with extended ranges. The missile’s current range is too short making its utility in that role limited but familiar to numerous allied nations that operate them. Such an idea is not new; in a November 2020 article, the commandant of the Marine Corps argued for a similar capability in a war with China. For Ukraine it could be viable in the long term, assuming adequate targeting and weapon range.

While there is a valid sense of urgency in ending the war and averting a food crisis, it must not be done on Russia’s terms. But even if the war ended tomorrow, until sea mines are removed, shipping in the north Black Sea will not resume.

Here allies with minesweepers and access to the Black Sea—like Turkey, Bulgaria, Romania, and even Germany via the Danube River—can play an important role in supporting Ukraine. While hostilities are ongoing, having those countries engaged in minesweeping is high risk; more prudent is to provide such capabilities for Ukraine to use in its waters as Black Sea nations clear and patrol their own.

In the meantime, nations should look at ways to alleviate the loss of Ukrainian and Russian grains and fertilizer and pursue diplomatic solutions to allow Ukrainian shipping of food, while at the same time helping Ukraine raise the cost of Russia’s blockade.

As long as Russia can damage Ukraine’s economy by preventing its ability to export many of its agricultural products, Kyiv will face challenges. Raising the costs for Russia is one way to bring the blockade and the war to an earlier end.