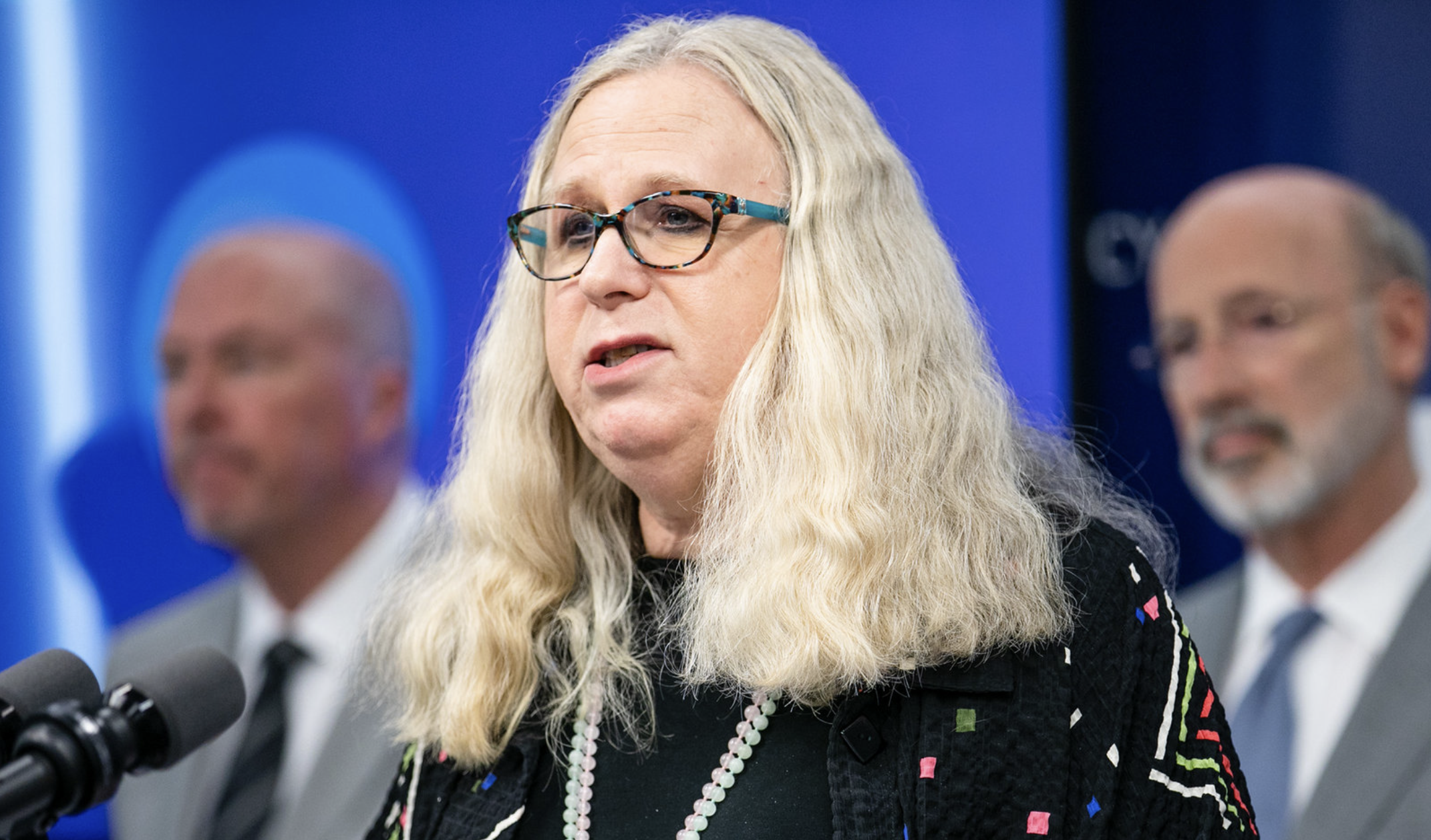 State Sen. Katie Muth once called then-Pennsylvania Health Secretary Rachel Levine “the mess in a dress,” according to the transcript of unsworn testimony a former Air Force major general gave during a 2021 state administrative hearing.

Levine, a transgender woman appointed Pennsylvania’s health secretary by Gov. Tom Wolf in 2017, has since gone on to be the highest-ranking transgender person in federal service after accepting a position in President Biden’s administration.

Although the testimony of Major General Eric Weller came in 2021, he was recalling a conversation from the earliest weeks of the pandemic when Levine had become the face of Pennsylvania state government because of her daily COVID press conferences.

Weller retired from a highly decorated career in the Air Force and then served as the deputy adjutant general for veteran’s affairs for the Pennsylvania Department of Military and Veterans Affairs (DMVA) from November 2016 to February 2021.

Weller was giving his recollections to a “name-clearing hearing” held by the Pennsylvania Office of Administration while testifying in support of two people who had been fired from their management positions from the Southeastern Veterans’ Center (SEVC) — two firings Muth had called for when the long-term care facility came under intense political and media scrutiny in the first weeks of the pandemic. 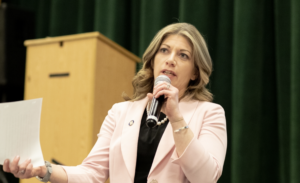 While Muth was claiming poor leadership at the facility in her senate district in Spring City, the ousted leaders and their backers like Weller say the SEVC leaders were scapegoated so as to deflect attention from the Department of Health’s lackluster start to its handling of the pandemic.

“By mid-April, State Senator Muth took it upon herself to start attacking the SEVC and the DMVA regarding the outbreak at SEVC,” Weller said, according to the transcript. “It is interesting to note that never once did Senator Muth offer any assistance to DMVA, let alone SEVC.”

Moments later in the testimony, he recalled a direct conversation between him and the senator, while describing her language as “filthy.”

“I didn’t know who the ‘mess in the dress’ was, later realizing that she was referring directly to Secretary Levine,” Weller continued. “That came from Senator Muth. And I have detailed notes about that conversation.”

(Broad + Liberty has lightly edited the quote with punctuation for clarity.)

When reached about the story, Weller declined to comment on the record further, saying the transcript would speak for itself. He did add, however, that he remembers telling the same anecdote under oath, and that he would not hesitate to retell the same story in the same manner if he were under oath.

Muth did not confirm or refute Weller’s claim about the Levine comment.

“I am extremely proud of the work our office has done to fight for the rights of veterans who bravely served our country and to hold those accountable who hurt them – particularly as they were vulnerable during the early months of the Covid-19 outbreak,” Muth said. “We championed THEIR needs in that uniquely challenging time; we didn’t defend the status quo or administration of failing facilities, and I will remain steadfast in support of our veterans in my role as a state senator and in my chairmanship of the Veterans Affairs and Emergency Preparedness Committee,” (emphasis original).

Although the number of fatalities at the SEVC was high, it was impossible to compare it contemporaneously to any other nursing homes or other long-term care facilities because the Wolf administration had not yet released statewide data — something it did not relent to until mid-May of 2020 amid constant public and media pressure.

When facility-by-facility data was eventually released it showed that another long-term care facility (LTCF) in Muth’s district, the Parkhouse Rehabilitation and Nursing Center in Royersford, fared worse. Parkhouse not only had more resident deaths (48 compared to 35), but also a higher fatality rate (35 percent to 33 percent). Parkhouse, however, was never the subject of Muth’s ire or of any Inquirer exposés.

Yet, an Inquirer report in May of 2020 charged that the SEVC’s top administrator, Commandant Rohan Blackwood, was abusive, citing a single but anonymous source as claiming he altered medical records.

Meanwhile, Muth has faced her own accusations of abusive misconduct.

As Broad + Liberty reported last month, Muth has seen nearly 200 percent turnover in her staff in roughly three-and-a-half years in the Senate, and a former staff member accused her in 2021 of bullying and fostering a hostile work environment.

The idea that Muth might have been willing to take on fights as high as the governor’s office seems to be supported by a quote she provided to an Inquirer article about the SEVC in July 2020.

Muth “had begun drafting a letter to the Senate Veterans Affairs and Emergency Preparedness Committee to [formally request] a hearing on the nursing home,” the Inquirer reported.

“The silence of the DMVA leadership and the governor’s office is damning,” she told the paper.

Both Weller and Blackwood testified that the governor’s office prohibited anyone from the facility from answering reporters’ questions.

A Washington Post article, aslo in July,  took aim at the SEVC for giving drug combinations in the earliest days of the pandemic that included hydroxychloroquine. While the drug has been largely discredited in the last year and a half as a COVID-19 remedy, it’s easy to forget that the government was gently giving permission for its use at the earliest stages of the pandemic.

The FDA’s guidance early in the pandemic sayid hydroxychloroquine “may benefit certain patients hospitalized with COVID-19 for whom a clinical trial is not available[.]” The guidance also said the drug was intended for hospitalized patients. The agency later revoked the guidance in June.

In that Washington Post article, Muth blasted the SEVC.

“Funny how they didn’t have PPE stockpiled but they made it a priority of their treatment protocol to include a drug that wasn’t proven to work and shouldn’t be used in non-hospital settings,” she said.

However, government documents obtained by Broad + Liberty show the facility was not as lax about PPE as she represented, at least where PPE is concerned.

On March 18, 2020, two days after Gov. Wolf ordered a statewide shutdown, SEVC requested, “N95 Masks and Face Shields (250 Each). Tent and Warming equipment for screening of COVID 19 prior to entry into the long term care facility,” according to a document from Pennsylvania Emergency Management Agency, which tracked all requests for PPE help submitted to the state.

A spreadsheet showing all PPE distributed under the control of the Pennsylvania Department of Health indicates that the SEVC didn’t receive its first shipment of PPE from the state until April 14, 2020 — 27 days after its original request.

In the hearing, Weller told the state that the very first delivery of face masks from the state was useless because the masks were expired by fifteen years.

For a point of contrast, the state PPE delivery spreadsheet shows that the Fair Acres Geriatric Center run by Delaware County received more than 5,000 N-95 masks along with hundreds of gowns, gloves, and face shields on March 28 and April 1, 2020. The delivery came just days after it requested face masks from PEMA. SEVC would continue to wait.

PPE shortages at nursing homes were a national problem, and not isolated to one state or one facility.

Months later, when Commandant Blackwood and the SEVC nursing director had already been suspended, Muth hinted that any attempts to get to a factual accounting of what happened would need to reach far beyond the facility’s leadership. She implied some kind of coverup had happened at a much higher level of state government, perhaps unwittingly aiding the thesis of Weller and Blackwood that top state officials trampled the SEVC.

“I’m fearful that because this is a state-run facility, a true assessment of what’s happened already and what’s continuing to happen won’t take place,” she told the Inquirer.