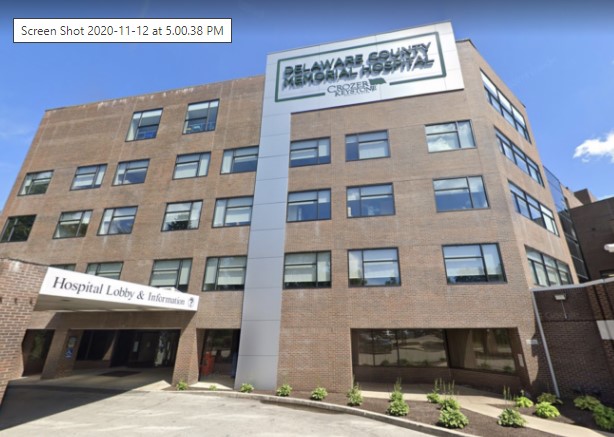 After the hospital company announced the hospital would be changing to a mental health facility without an ER, the Foundation for Delaware County sued for an injunction. The hospital is appealing a court ruling granting it.

“The health and safety of the tens of thousands of residents who live in the eastern section of Delaware County is in jeopardy,” said Taylor. “On Friday evening, the Pennsylvania Department of Health announced an order closing the Emergency Department here at Delaware County Memorial Hospital due to staffing.

“Prospect’s recent history shows a gross lack of concern for the well-being of Delaware County residents. On September 21, Prospect announced its intention to close the hospital within 60 days. They were faced with legal action to remain open, which they then appealed. It isn’t by chance that Prospect is now unable to adequately staff the hospital- which has resulted in the state shutting them down,” Taylor said.

“As you can imagine, that is a severe concern to the county, to the tens of thousands of residents who live in this section of the county, to the nurses and medical staff who treat the community here at the hospital, and to the EMS members who transport residents here for lifesaving care. In a lifesaving situation, seconds can save a life.”

Frances Sheehan, president of the Foundation for Delaware County, said the foundation was formed six years ago when Prospect Medical Holdings, parent company of Crozer Medical, bought the hospital. Prospect agreed to keep ER services through 2026 but “has not honored that commitment to the community.”

The Foundation secured a temporary injunction, but with the state’s decision, “Prospect has shown a level of contempt for the court and for the health and well-being of the people of Eastern Delaware County. Again and again, Prospect has proven that they are not a trusted partner.”

With the help of the district attorney and the attorney general, the foundation will “pursue all legal options available,” said Sheehan. “People’s lives and health are at stake right here, right now.”

Taylor said, “As a mother, I am concerned for the many young women in the community who were receiving pre-natal care here, and who now need to travel to a hospital in another section of the county or to Philadelphia or Montgomery County to get the vital care they need throughout their pregnancies and then also care for their newborns and children,” Taylor said.

“Traveling to the next closest hospital is not an easy and viable option for some women. The same is true for some of the elderly residents who live in this section of the county. And for those who don’t have a vehicle and rely on public transportation or walking. This is a major barrier for them to access healthcare,” she said.

“The closure of the hospital greatly impacts some of our most vulnerable residents and historically underserved communities. Through the past year, Prospect has shown little to no regard to the safety and well-being of our community and the county has, and will continue, to do everything in its power to ensure the hospital stays open.

The county is also continuing to explore all of our legal options to try to keep the hospital open,” she said.

Asked to respond, the hospital sent this message. “Crozer Health received an order from the Pennsylvania Department of Health advising us that due to staffing issues, we must close the Emergency Department at Delaware County Memorial Hospital until further notice, beginning at 7:00 a.m. on Monday, November 7,” said Crozer Health CEO Tony Esposito. “We have alerted nearby emergency departments and EMS, including our Taylor Hospital and Crozer-Chester Medical Center, that are prepared to see patients.”