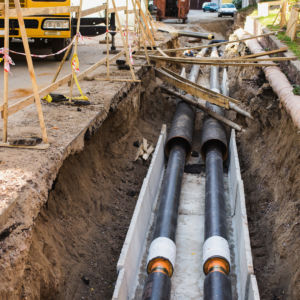 It was expressed during a Neighbors Opposing Privatization Efforts (NOPE) virtual town hall meeting last Thursday. It was a response to the authority’s July 13 vote to give Aqua one year of exclusive rights to buy its sewer system and recommended it as the purchaser.

“We look forward to discussing the merits of the transaction to BCWSA customers and employees in the coming weeks,” said Essential Utilities Chairman and CEO Christopher Franklin.

Not so fast, NOPE members say. They are marshaling their forces to speak out at the next BCWSA meeting on Wednesday and a future meeting of the Bucks County Board of Commissioners meeting. They say the sale will hurt customers by increasing their costs.

“We just have to get the word out,” said NOPE co-founder David McMahon of Norristown. “Once people are aware this (privatization) is in their future, they rally.”

McMahon says Aqua is not buying the Bucks County sewer infrastructure as much as it is buying the system’s customers. Those customers will keep paying for the water and sewer services forever.

The state legislature passed Act 12 in 2016 which permitted private companies to purchase publicly owned utilities at “fair market” value and to recover the costs through their rates. That set off a feeding frenzy of private-sector acquisitions of public water systems.

Unlike publicly owned utilities, private companies can charge their customers for the cost of the purchase in addition to the cost of the sewer or water service. They also must make a profit.

BCWSA customers aren’t just in Bucks County. They can also be found in Upper Dublin and Springfield in Montgomery County and West Vincent in Chester County.

“It’s really distressing how much power Aqua has,” said Mahon.

Bill Ferguson, co-founder of Keep water Affordable, says the recent acquisitions all have the same problem. The private companies purchasing the assets “add no value and extract large profits,” he said. “The customers should have the right to vote on the proposed sale.”

They allow the companies to increase ratepayer costs. The utility companies offer sellers a large amount of money but they can raise rates to cover it, he said.

“The profits alone will cause your rates to double,” said Ferguson added.  When that happens township or county officials can “shift the blame to Aqua.”

While the companies promise rate stabilization, they can also then go to the Public Utilities Commission to get increases.

“They add no value and extract large profits,” he said. “The customers should have the right to vote on the proposed sale.”

“Private companies are not just buying infrastructure,” said Bellitto. “What they’re buying is the customer who will provide a constant revenue stream.”

And there is an incentive for the sellers to get as much as possible and the buyers also do not mind paying high prices, since they can turn around and charge the customer, he said.

“They’re going to get back whatever they pay and more,” said Bellitto.  While BCWSA says customers will only pay $20 more a month “that is a complete fabrication,” he said. “Don’t believe it for a second.”

“At the end of the day this all comes down to the (Bucks County) commissioners,” said McMahon. “This doesn’t pass without their approval. The commissioners have every right and duty to prevent it.”

Elizabeth Fleschar, a water chemist who lives in Peddler’s View in Horsham, said her subdivision is already serviced by Aqua PA.

“Our rates have increased fantastically,” she said. She noted that only the first 2,000 gallons used are at the lower rate, while the rate “then escalates.” And there have been water quality issues, too, she said.

“There is no question in my mind there is some very serious dark money changing hands to get Aqua to a monopoly. We are a cash cow for Aqua. Their cost to run it is half what we’re paying.”

However, a spokesperson for Aqua PA sent a statement, rebutting NOPE’s contentions.

“Aqua Pennsylvania is excited to have been selected by the board of the Bucks County Water and Sewer Authority as its potential partner for the sale of its wastewater operations.

“As part of our proposal to BCWSA, Aqua has committed to maintain BCWSA’s sanitary wastewater rates in effect at closing for the first year after the acquisition or until after Jan. 1, 2025 (whichever occurs first).  We understand that BCWSA anticipates that a portion of the sale proceeds from the acquisition will be contributed to a fund maintained by either Bucks County or BCWSA to minimize rate increases over the next 10 years.

“We appreciate that the BCWSA board, as well as the county commissioners, municipal leaders, and most importantly, customers, are interested in conserving long-term rate protection and we are ready to engage with them as it’s always been our goal to ensure affordable rates for our customers.”