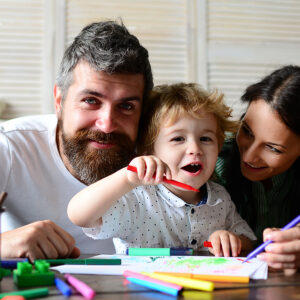 For another viewpoint see: Counterpoint: Too Much Parental Involvement Hurts Kids

If there’s one thing the last three years have taught American parents, it’s that they need to take control of their children’s education.

Despite massive infusions of additional federal cash after COVID-19 hit the country, on top of K-12 education spending tripling since 1970 to a record $751.7 billion per year, most U.S. school districts are unable to address the basic educational needs of our youth.

The recent National Assessment of Educational Progress reading and math tests confirmed this and did not surprise parents who’ve witnessed educational neglect firsthand. The results, released in October, showed that two-thirds or more of fourth- and eighth-grade students tested can neither read nor do math proficiently. Even Education Secretary Miguel Cardona, a friend of education unions and a defender of the traditional system, described the scores as “appalling.”

But rather than recommend a bold change, Cardona asked Congress for more money, without any accountability, I might add.

Contrast that to what really works for kids: education personalized to their needs, designed with learning in mind, and able to engage students actively. That’s real innovation, and its presence is a game-changer in students’ lives.

So is fostering “parent power,” providing parents with the right to choose what works best for their family and the information and resources to do it.

As the Center for Education Reform’s new 2022 Parent Power Index shows, however, this only exists robustly in fewer than a third of the states. Florida leads the pack, followed by Arizona, Indiana, Ohio, Wisconsin, West Virginia and Minnesota. Overall, more than half of the states (28) — including California, Michigan and New York — earned grades of D and F. No wonder education achievement is so low, particularly for children with special needs and those who were being poorly served by the change-resistant education system even before the pandemic struck.

Parents are fighting for more power today, and more education innovators are stepping up to fill their needs.

This was apparent in the competition for the $1 million Yass Prize, awarded Dec. 14 to Arizona Autism Charter Schools, with millions more awarded to other exemplary organizations.

“I was just a mom,” said Diana Diaz-Harrison, founder of the Arizona schools. “As an autism mom, I don’t want my kid to be seen as disabled. I want him to be seen as a doer, intelligent, productive, and so these charter schools that we are starting across America will help our children be neurodiverse, be who they are and be fulfilling, productive citizens.”

Kenisha Skaggs tells a similar story about SOAR Academy, the micro-school and tutoring center she founded in rural Georgia: “Imagine being an eighth grader on a first-grade math and reading level … in the public school system. … That was Keanna’s story when she met us last year and attended our school.”

These are only two of the 2,700 education entrepreneurs from 49 states who entered this year’s Yass Prize competition. Many organizations were founded by parents, some by educators who value parents and understand that many children have unique needs.

In Phoenix, for example, Janelle Wood launched the Black Mothers Forums during the pandemic, a first-of-its-kind urban micro-school network that operates small group learning centers for Black moms and their children. Nearly 2,000 miles away, in Detroit, another Black mom, Bernita Bradley, started an organization called Engaged Detroit, which coaches Black moms on home-schooling their children, provides them with curriculum tools, and advocates on their behalf to make it easier.

Only some parents have the ability, energy, fortitude or resources to become  hands-on educators or educational entrepreneurs. They shouldn’t have to be heroes and fight the system to deliver what’s best.

We can no longer afford to wait as traditional public schools awash in cash deprive children of their right to a great education. It’s time for state leaders to follow the example of Florida and Arizona, support parents like Diana, Kenisha and Janelle, and provide them with the freedom, opportunities and resources to drive their children’s education.