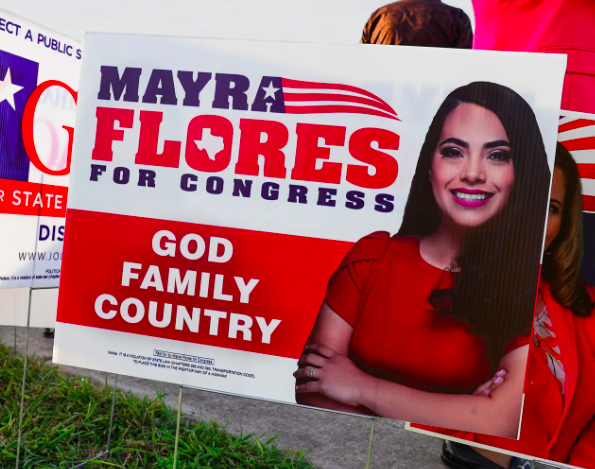 “I am leaving; you took me for granted too long.” These are words you might hear between two people separating in a relationship. In actuality, it is what Hispanics are saying to the Democratic Party. And a more fitting quote would be, “Stop trying to control me.”

Everyone is asking why are so many Hispanics are fleeing the Democratic Party. The answer is simple. Hispanics are conservative. We stand by our faith, we love our families, and we love our country. We are passionate and proud people. We “woke” up to the fact that Democrats are trying to reinvent everything valuable to us.

The next question is, “Is there a Hispanic red wave truly?” We are hearing it straight from their mouth. NRSC Chairman Sen. Rick Scott launched the Hispanic Battleground Survey in 2021. Over 1,200 likely Hispanic voters of all parties revealed that a majority reject Democratic policies regarding socialism, lack of opportunity, voter ID ban, and immigration. They don’t want men in their daughter’s locker rooms. Yet Democrats assume Hispanics are with them. Maybe yesterday, but not today!

Even on a more personal level, as the executive director of the Hispanic Republican Coalition of Pennsylvania (HRCP), I have had the privilege of working with the NRSC Regional Director Josie Hill on this year’s project called Operation Vamos.

I have spoken to several hundred Democrats and they tell me overwhelmingly that they think President Joe Biden is not doing a good job. They are voting Republican. One lady I spoke to was getting her hair braided on her porch. With frustration, she threw her hands in the air and said, “We don’t have any money, gas costs too much. I’m voting for who is going to help me.” These are voters!

According to community leader David Torres, Hispanic voters in Philadelphia are vocal about what they want and don’t want.

“They don’t want more politicians coming into their neighborhoods promising great ideas, asking for their vote, and then leaving until the next election,” he said.

This abandonment is an excellent example of what I meant when I said, “You took me for granted for too long.” Do Democrats still believe Hispanics will vote for them when Philadelphia’s inundation of violent crime makes everyone fear for their lives? Torres also mentioned that “there is no opportunity in city government for Hispanics, but they want our votes.”

We still have diehards like my Abuela (grandmother), who will not switch parties. She would never consider changing her registration from Democrat. She will kick you out of her house if you try to convince her, but she will vote conservative. Slowly, Hispanics are understanding that the Democratic Party isn’t what we remember it to be; it has “progressed” into something that we do not accept.

Before we say goodbye, we have to discuss being called a taco by Dr. Jill Biden. If for no other reason, we have pride. We are more than tacos. I eat rice and beans more than I eat tacos. Now that is the most racist statement coming from a Democrat. Hispanics are ambitious, hard-working, and loyal, and we vote!

Our organization, HRCP, will continue the mission to engage with Hispanic voters across the Commonwealth of Pennsylvania to register as Republicans. We will strive to make Pennsylvania a Red state again. Our message is simple, “the Republican Party wants what the voters want: higher quality of life and less government. With your support, we are creating the next generation of Republican voters — and we will impact elections from Congress to the governor’s race.”

We have a great team of individuals with experience running campaigns and a political strategist.

If we continue to write these stories, point out real-life issues, and pick up where the Democrats have failed, we will ride this wave to the shorelines of victory. We have a new relationship to embrace.